The summer weather looked set to continue for at least a few more days, so I decided to have another go at the walk that I had done in July. On the last trip I had forgotten my stove, so had to complete the whole walk in a very long ten hour day. his time I was planning to climb Pen Llithrigg yr Wrach and traverse the ridge over Pen yr Helgi Du and Craig yr Ysfa to a camp site a couple of hundred feet below the summit of Carnedd Llewelyn. 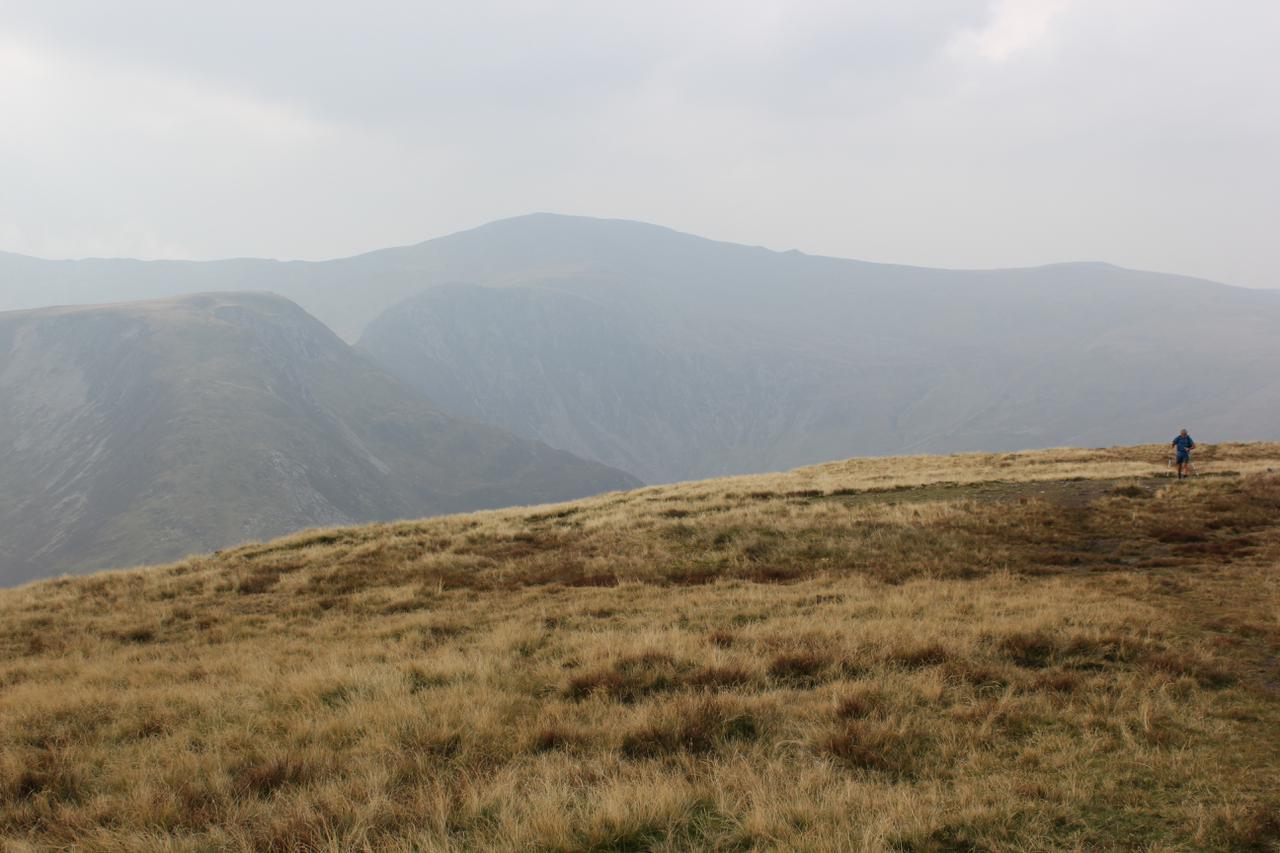 I didn't leave home until mid-morning. When I arrived at the start of the road up into Cwm Eigiau there were signs at the bottom of the road warning of long delays. Luckily I wasn't held up by what turned out to be fairly minor repairs. It was midweek, so there were only about three cars in the car park when I pulled in.

Although it was hot, the heat had made the atmosphere hazy and some of the summits were obscured by mist. I double checked all my gear before setting off to make sure that I hadn't forgotten something important like the stove. Feeling confident that I hadn't forgotten anything I set off along the track towards the reservoir. After about half a mile I realized that I hadn't turned the GPS on! I seldom use the GPS for navigation, but like to keep a record of my track.

Mist over Tryfan and the Glyders 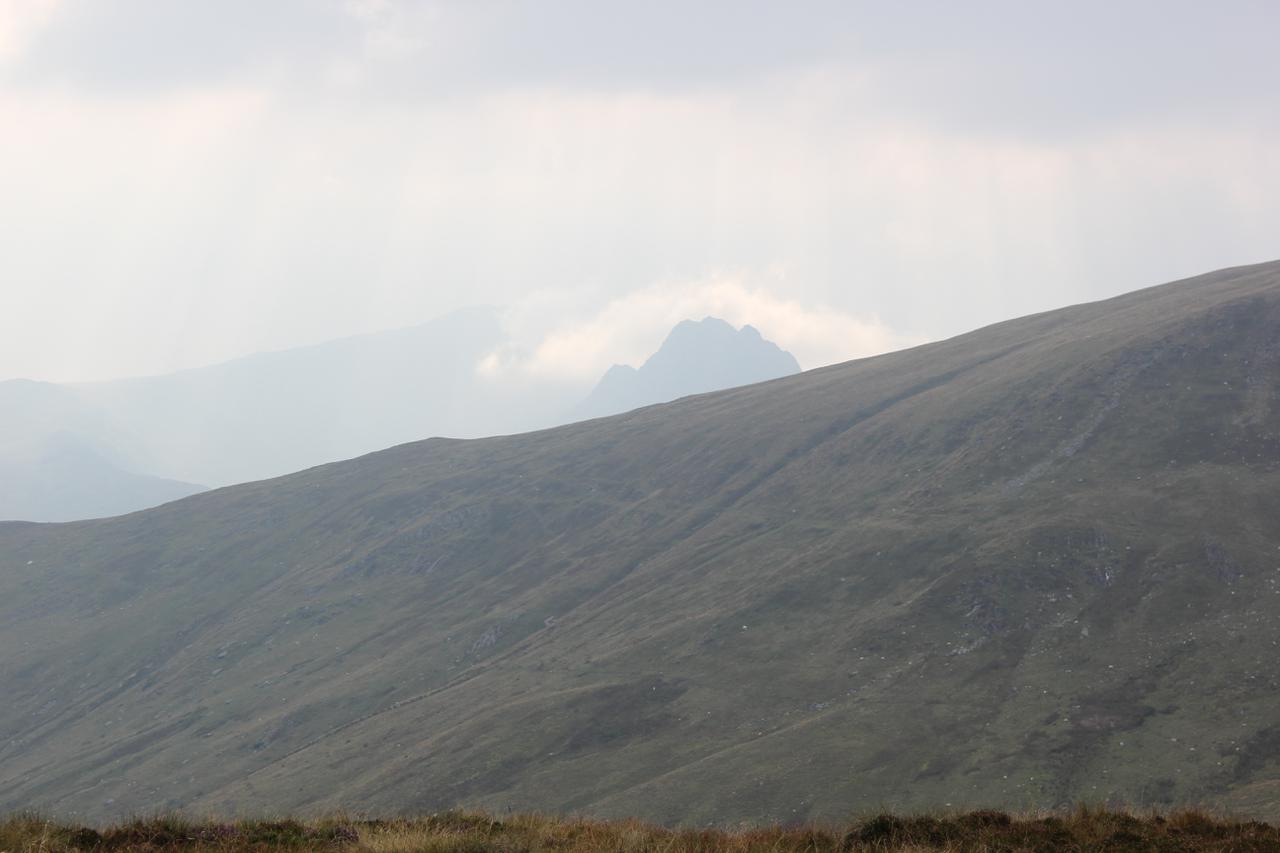 I filled my 2 litre and 1 litre Platypus water bottles from the reservoir and also the Travel Tap. I wasn't sure if this would be enough, but it turned out towards the just about the right amount, as I had about 500ml spare in the morning for the walk back. There are not really any water sources on top of the Carneddau, except for some stagnant peaty pools. In the past I have used water from these and filtered it through the Travel Tap. I don't normally bother filtering the water from the reservoir.

Plodding along the track I soon reached the old quarry workings at ??? and stopped for a rest. For the first time I had brought the GoPro video camera with me, so I made a couple of short videos of the view. The path beyond the quarry is vague, so I headed up diagonally towards the ridge. Sweating in the heat, I finally found the path along the crest of the ridge that leads up to the summit of Pen Llithrig yr Wrach.

On my last trip I had started to get cramp on the pull up to Pen yr Helgi Du and wanted to avoid it this time. I stopped for a rest, drank quite a lot of water and ate a couple of flapjacks. Moel Siabod was only just visible through the haze and the tops of Tryfan and the Glyders were covered in mist. While I was resting on the summit a man appeared up the slope from Pen yr Helgi Du. While chatting to him we heard a Chough calling. I said that had seen several Grouse lower down. Apparently Grouse numbers have dropped considerably since the 1970's when the moors were managed. 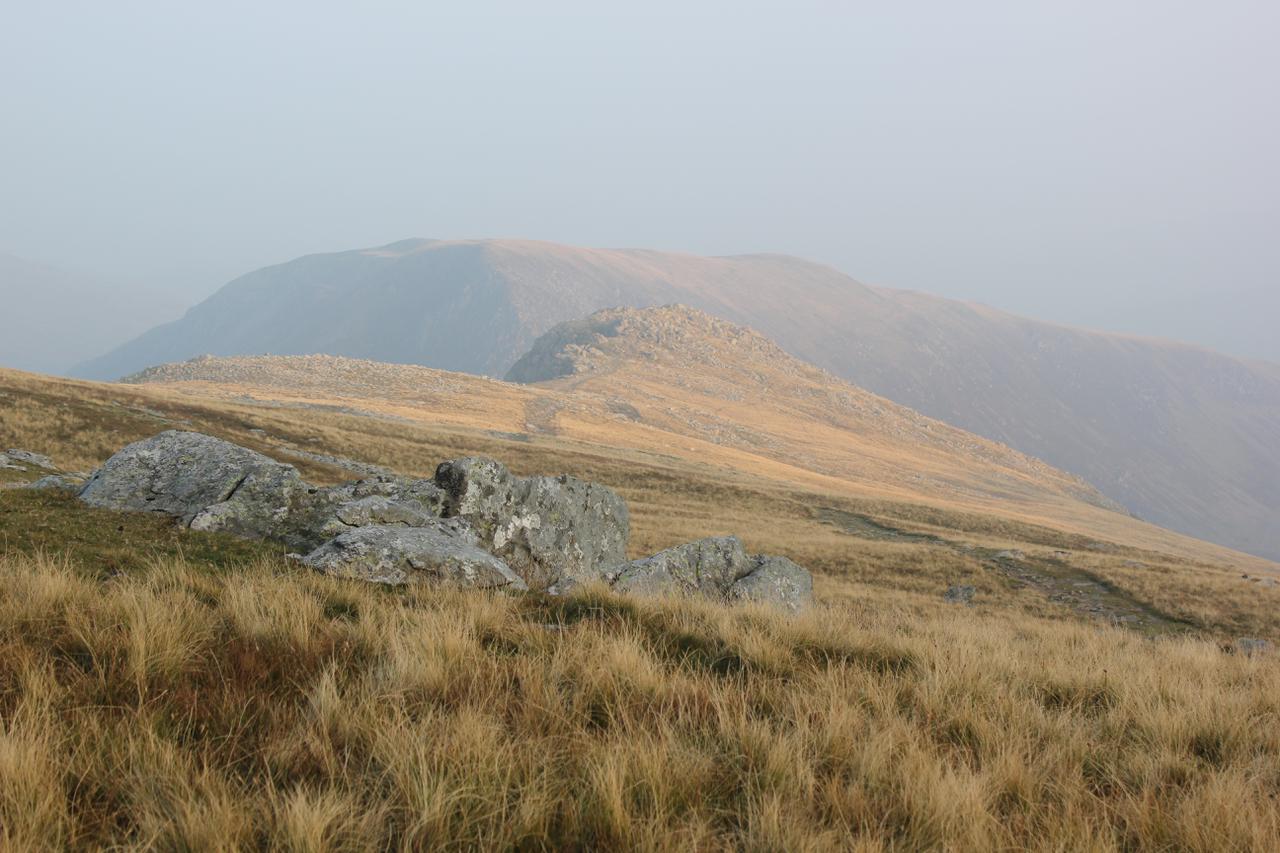 I dropped down to the col between Pen Llithrig yr Wrach and Pen yr Helgi Du. The slope up to the summit of Pen yr Helgi Du didn't seem too bad this time and I didn't get cramp in my legs. I walked along the summit ridge and began the descent of the ??? ridge. It was here that I met the only other person I saw all day. I stopped to let him pass as he climbed towards the summit. The scramble down is quite steep, but fairly short. If you don't like exposure, make sure that you keep to the left (facing out). I was soon down at Bwlch Eryl Farchog and began the climb towards Craig yr Ysfa. The atmosphere was beginning to clear and the views were improving as evening began to draw in. The short scramble up the rocky step was awkward with a heavy sack, but I was soon standing on the summit of Craig yr Ysfa. I had a quick look over the top at the pinaccles near the top of Amphitheatre Buttress. I have done this climb several times in the past and it's one of the best long mountaineering routes in Wales. The climbing is easy apart from the short crux section. If you can jam, climbing the crack to the top of a short wall is easy. There is then a very exposed step right onto a small ledge. Faling off here would involve a long fall into the gulley below. However, you can drop a long sling over a pinnacle, which protects the step round and the ground above is easier. The final section of easy climbing over the pinaccles is a delightfully exposed scramble. Maybe next time I'll climb up from Ogwen, dump my sack on the top, descend to the bottom, the climb back up to my sack and camp on Carnedd Llewelyn.

It was now around 5:30, so I decided to camp on the flat grassy shelf on the SE ridge of Carnedd Llewelyn that I had used a couple of times in the past:

The site is quite sheltered and there are several piles of rock nearby, which are useful tables. It's quite near to the main path up Carnedd Llewelyn, but far enough away that you are not likely to be noticed by people passing by. It was now shortly after 6:00pm and there was nobody else visible anywhere on the Carneddau. The site is a bit tussocky, but I had soon found a nice flat area to pitch the tent. I pitched it with the door facing East, overlooking Cwm Eigiau so I could see the dawn from the tent door.

I soon had the stove going and boiled enough water to make a hot chocolate and re-hydrate a Bewell Chilli. Despite sitting in a pot cosy for 10 minutes, the rice in the chilli didn't seem to have rehydrated properly. I boiled some more water, poured it into the pouch and waited another 5 minutes. The rice still didn't seem to be properly cooked, but I ate it anyway. I was tired so after taking a few photos I got into my sleeping bag. After a short rest, I got out of the tent to set up the GoPro. I wanted to take a series of still photos of the dawn at intervals of 30 seconds and then turn these into a video of the sunrise. I spent some time fiddling around with the various GoPro brackets that I had brought with me and eventually managed to rig up something that locked to my walking pole. There then followed a short pantomime, while I tried to find a spot in the grass where I could push the walking into. Finding somewhere that didn't have a rock a few inches under the ground proved difficult. When I had found a good spot I set the GoPro up facing over Cwm Eigiau and then retired to bed. 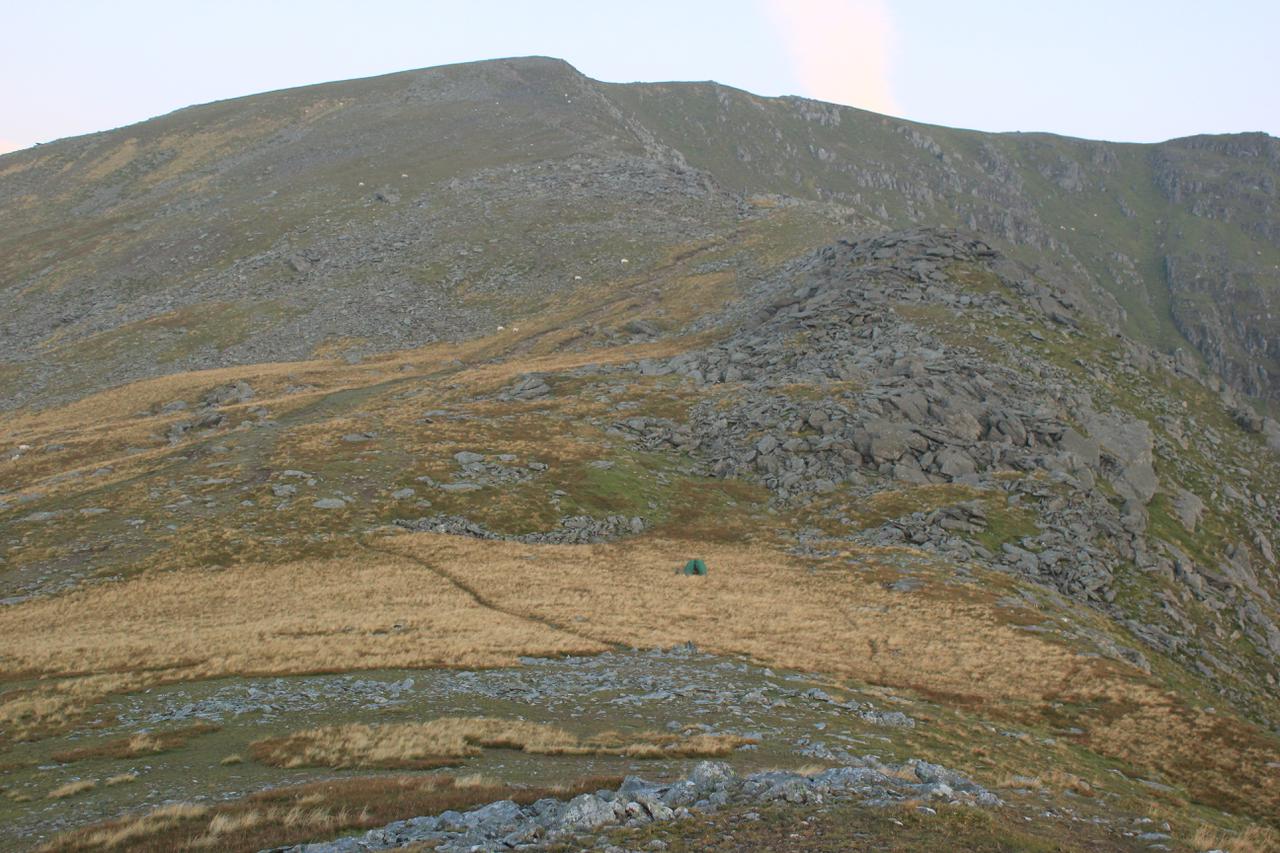 The GoPro is in a weather proof case, so if it rained it didn't matter. Keeping it inside the tent isn't a good idea, as it's warmer inside the tent than outside, or at least it should be! Taking the camera from a warm tent to a cold outside usually results on condensation on the lens which spoils your photos.

The battery life of a GoPro in time lapse mode is around two hours. It was quite cold at 3000 feet, so I expected the battery life to be shorter. I set an alarm for 5:30am, so I could turn the GoPro on to start taking the time lapse photos some time before the sun came over the horizon . I woke up before the alarm went off and the Eastern sky was already beginning to glow red. I scrambled out of the tent and set the GoPro off. I made myself a hot drink while I watched the horizon as it gradually got lighter and the sun finally appeared. Unlike the previous day the atmosphere was crystal clear and the summits were clear of mist. However, by about 7:00am mist had drifted over from the west and all the views were obscured.

I packed away and began the trudge up towards the summit of Carnedd Llewelyn. I could see patches of blue above me, but all the views were obscured. From the summit, I set off along the ridge heading towards Foel Grach. I began descending and was about to get the map out to check my position, when I dropped below the mist. I could now see the path that descends to Gledrffordd. I thought about continuing over to Foel Grach and then descending the ridge that leads from the summit down to Gledrffordd, but the mist was coming and going over the summit. I didn't want to walk all the way up to the summit only to find the view obscured by the mist.

Tent at dawn. Mist rolling in. 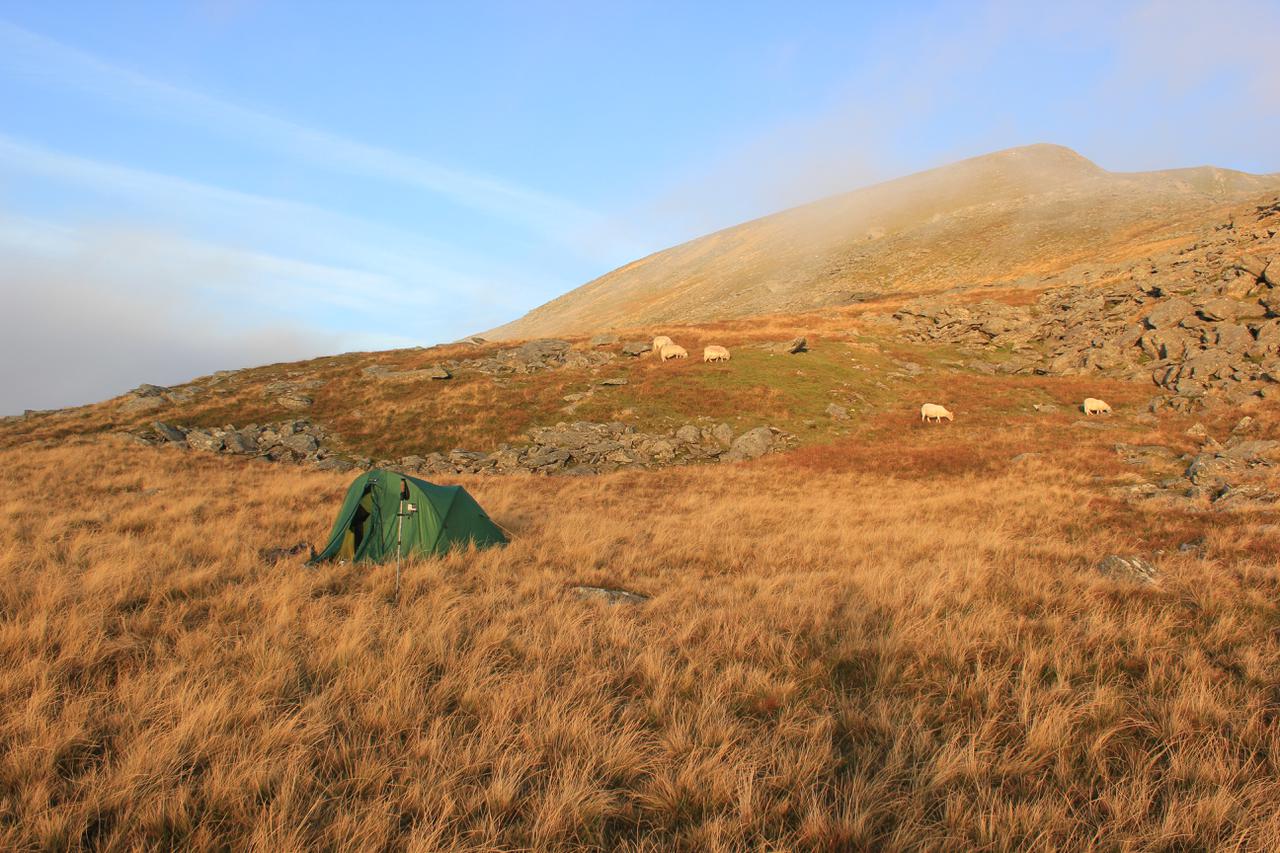 The descent was straightforward and this time I didn't make the mistake of climbing onto the top of Craig Eigiau, but contoured along below the ridge. As I joined the Landrover track I met what appeared to be a school party who were being shown how to find where they were on the map by their teacher. Further along the track I passed a man and what appeared to be his daughter heading up the track. When I reached the car park there were only two or three other cars parked there. Being able to walk midweek is definitely and advantage if you want the hills to yourself.