We often go to the Lake District in the October half term for a short break. At that time of year the hours of daylight are short and the weather can be dreadful. However, the autumn colours are always worth seeing and sometimes you get those cold clear days when you can see for miles.

John and Ella on Skiddaw 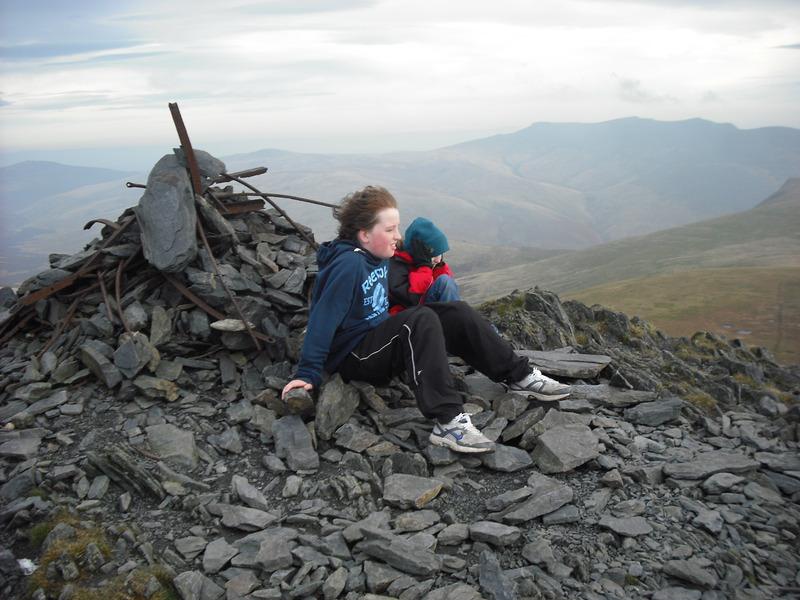 This year we were staying at the Lairbeck Hotel in Keswick. This is a very friendly small hotel in a Victorian house. The great advantage for us is that they have a room large enough for all five of us to share.

The weather forecast for the three days we were staying was very bad, with visibility on the fells predicted to be zero with heavy rain. Luckily for the first two days the weather turned out to be much better than the forecast.

On the second day we decided to climb Skiddaw, as it was close to Keswick and not too strenuous. I had climbed it once before in the 1970's and remember the walk as being pretty boring, but with good views back over Keswick.

Rather than walking from the hotel, we cheated by driving up to the car park at Latrigg. The tops were clear and it didn't look as though it was going to rain in the next few hours.

As we plodded along the path towards the summit ridge the wind was gradually increasing in force. Rather than continue plodding all the way to the main summit, we turned off at the fence at the top of Jenkin Hill and headed up to Little Man. The last few feet to the summit were exposed to the full force of the gale. I had trouble staying on my feet, even though I was carrying a fairly heavy sack. Ella was blown off her feet a couple of times. We sat down next to the rusty remains of the old fence posts and I took a couple of photos. It would have been dangerous to continue along the summit ridge, as there was a distinct possibility of Ella being blown off. We dropped back down to the path at Jenkin Hill and were soon out of the worst of the wind.