I have always liked the idea of spending a night on the summit of Moel Siabod. The views over Snowdonia and the other Welsh mountains to the south are unrivalled. In the recent spell of settled fine weather I decided it was time to actually go and do it.

Moel Siabod from the end of the farm track. 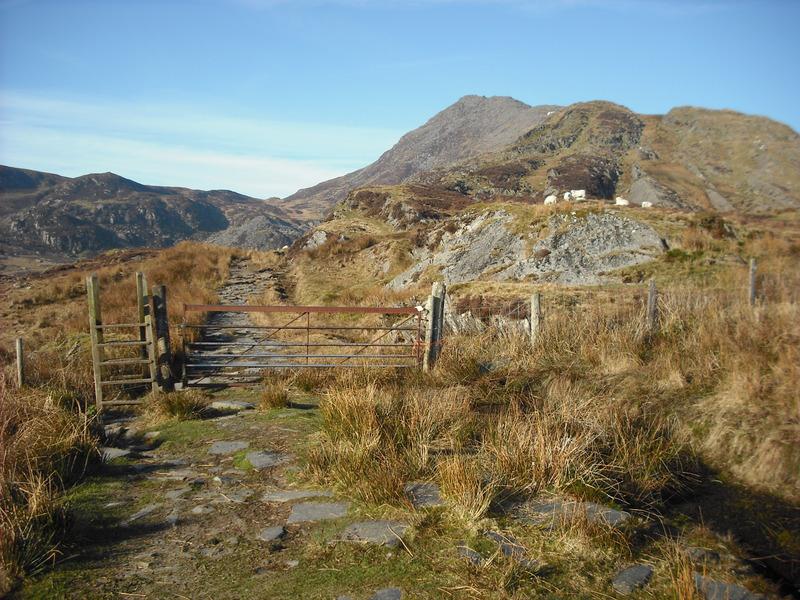 I arrived in Capel Curig about 4:30pm and parked in the small car park at Bryn Glo. I packed my sack and started walking along the A5 crossing the bridge at Pont Cyfyng. I walked up the farm track, familiar from many past ascents of Siabod, reaching the final ladder style at the end of the track. It was sunny and the sky was almost clear, but there was a slight haze. 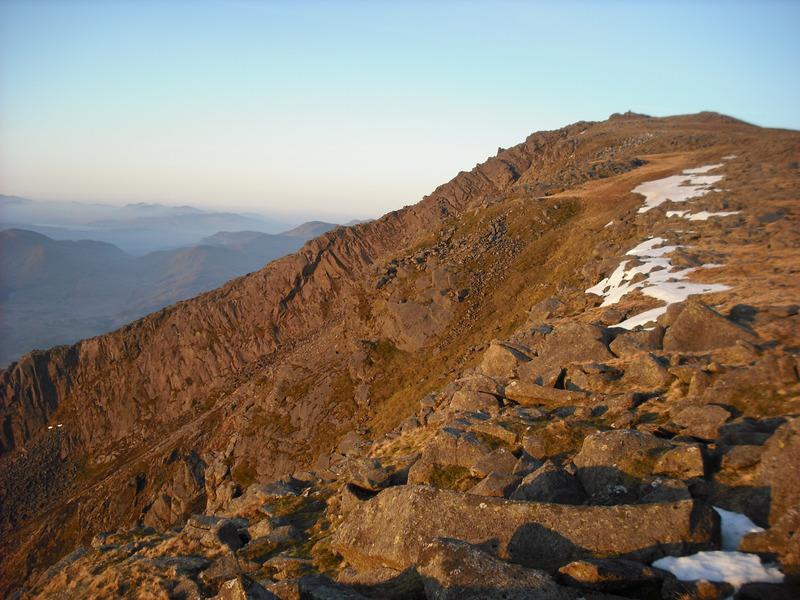 My intention was to walk up past Lyn y Foel and ascend the Ddear Ddu Ridge to the summit. However, when I reached the lake the shore was very wet and boggy after the snowy winter. I traversed along a good path on the headwall above the lake, thinking that I could climb up onto the ridge about half way up. I made my way up to the foot of the ridge and began climbing up what looked like a good way onto the crest. However, the final hundred feet up a steep corner filled with grass proved harder than expected. I was carrying quite a heavy sack and it all felt very insecure. I wimped out and climbed back down, traversing back to the path. The path continued directly up a gully filled with loose scree. It wasn't difficult, but it was unpleasant.

Finally I emerged on the summit ridge close to the summit trig point. I hadn't stopped all the way up was very hot and sweaty. I sat just below the trig point, sheltered from a cool breeze to drink a Fruit Shoot and eat a couple of almond slices. I left the sack close to the stone shelter, just below the trig point and reconnoitred for a good camp site. There was a cool north easterly breeze, but the forecast was good and no high winds were predicted.

There is a nice flat grassy area just to the north west of the summit shelter, which is where I decided to pitch the tent. By the time I had got the tent pitched and unpacked my gear it was getting very cold. I boiled some water to make a hot chocolate and to rehydrate my pasta and cheese meal. It was now cold enough that I needed to wear all my layers, plus gloves to stop my hands freezing.

The Tent and Sunset over Snowdon. 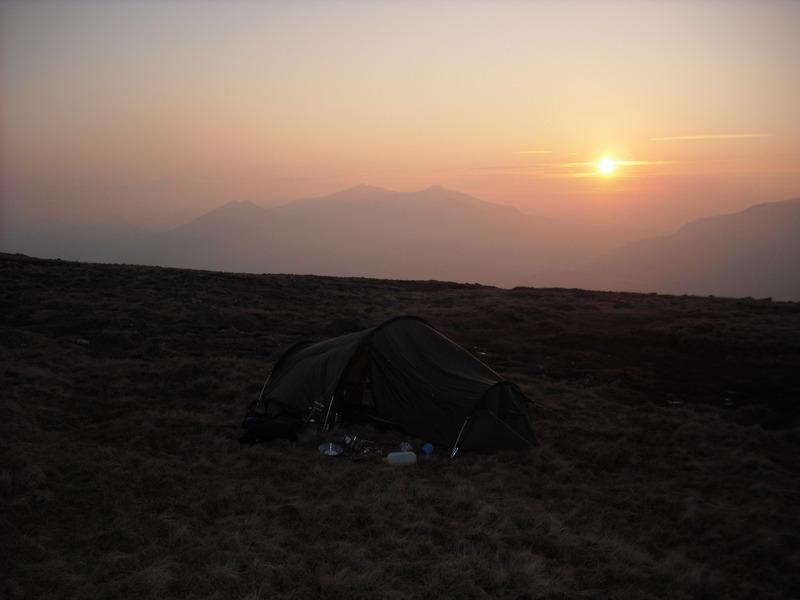 The sun was rapidly disappearing, so I wandered round taking some photos. I also managed to get a couple of pictures of myself outside the tent by perching the phone on a rock and using the self timer. I retreated inside the tent and got into my sleeping bag to warm myself up. Surprisingly, there was good T-Mobile coverage on the summit, so I sent a couple of photos from the phone back home.

When I had warmed up I went back outside the tent. By now it was completely dark. The sky was clear and I could see the bright lights of what I presumed was Bangor in the distance. The clear sky and north easterly breeze mean that it had now got very cold. My fingers were numb within a few seconds of removing my gloves, so I scuttled back inside the tent and got back into my sleeping bag.

This was the first outing from my Thermarest Neoair. I was surprised at just how comfortable it was, definitely a good purchase. I drifted in and out of sleep finally getting up about 5:30am. Sunrise was supposedly shortly after 6:00am, but I could see a red glow on the horizon. It had been cold outside the tent during the night. My little keyring thermometer showed that it was around -4C and the outside of the tent was covered in a layer of ice. 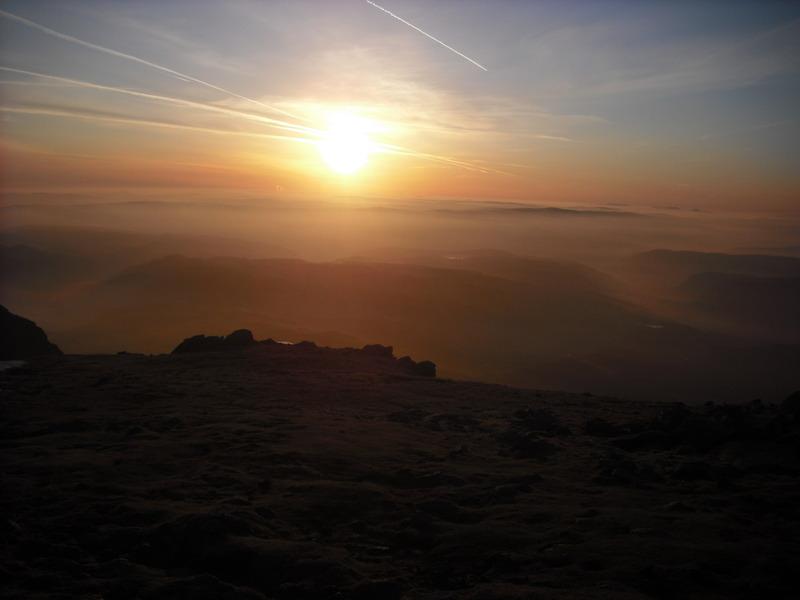 Stupidly I had left the stove outside the tent. Even though I was using Coleman Propane/Butane mix there wasn't enough pressure to work the stove properly. I stuck the canister in my sleeping bag for 10 mins and tried again. This time it worked fine. My Primus Spider stove has a pre-heating coil, so once the stove was lit it was soon roaring away. I made a cup of hot chocolate and had some more almond slices. I wandered around taking more photos. The sky was completely clear and yesterdays evening haze had completely dispersed. The valleys to the south of Siabod were filled with mist, but those to the north were clear.

I hung around for about an hour waiting for it to get a bit warmer before packing up and descending the north east ridge to the farm track. I got back to the car about 8:45am and drove round to Llanberis for a well deserved breakfast in Pete's Eats. 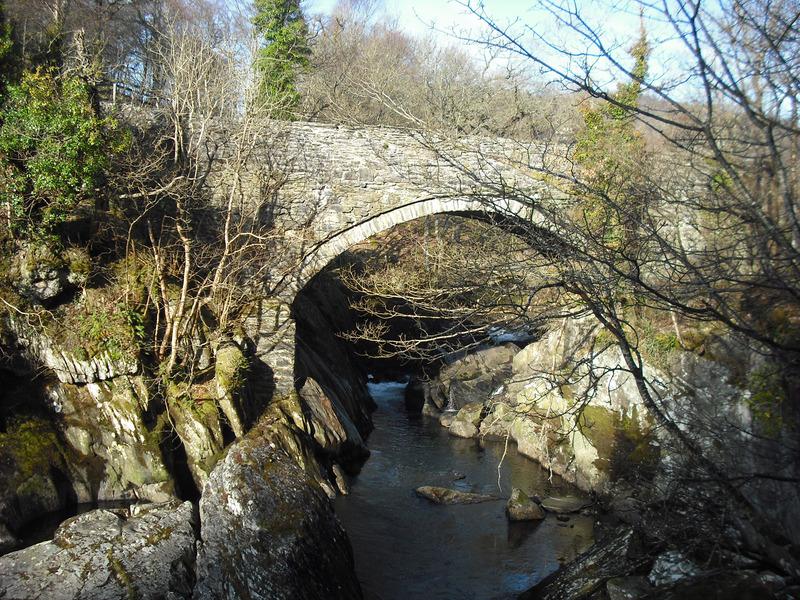 Glyders and Tryfan at Sunset. 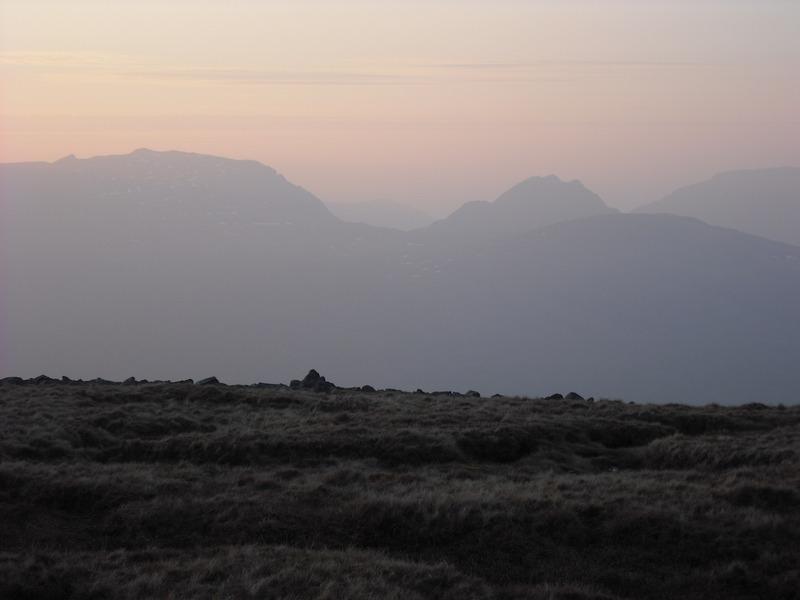 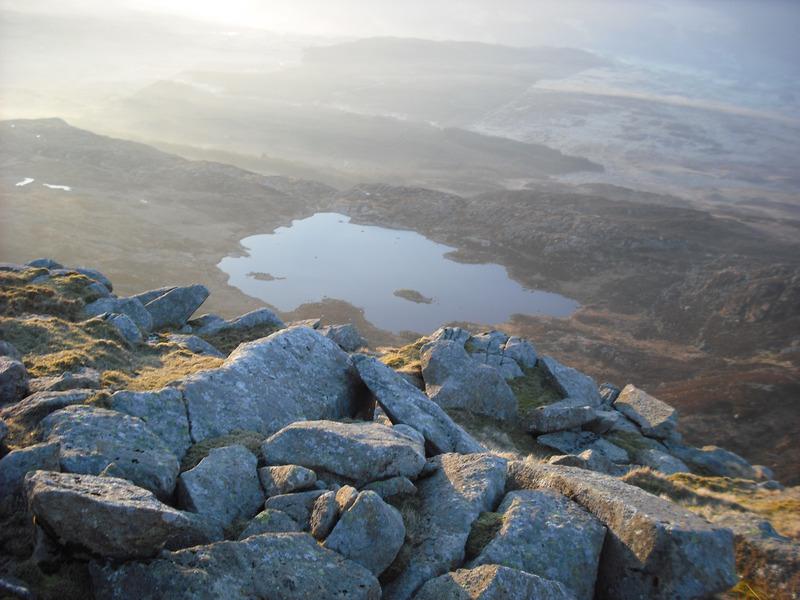 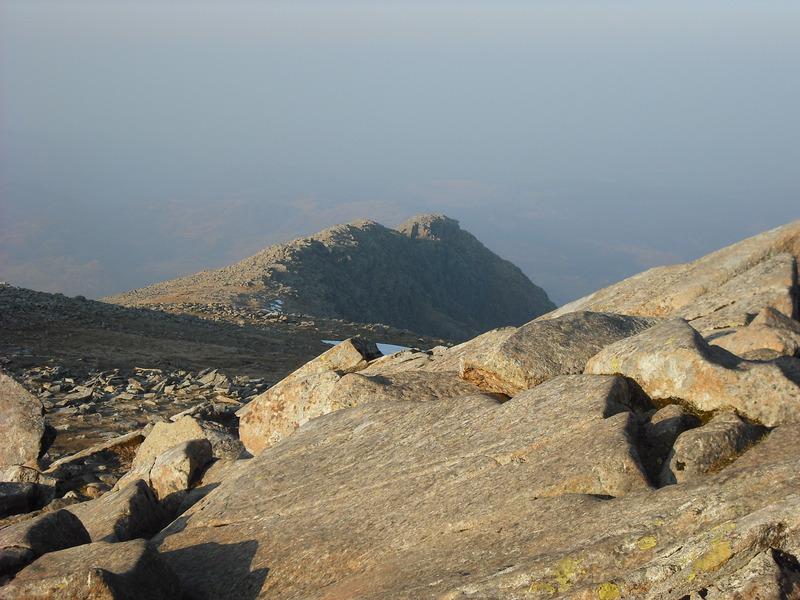 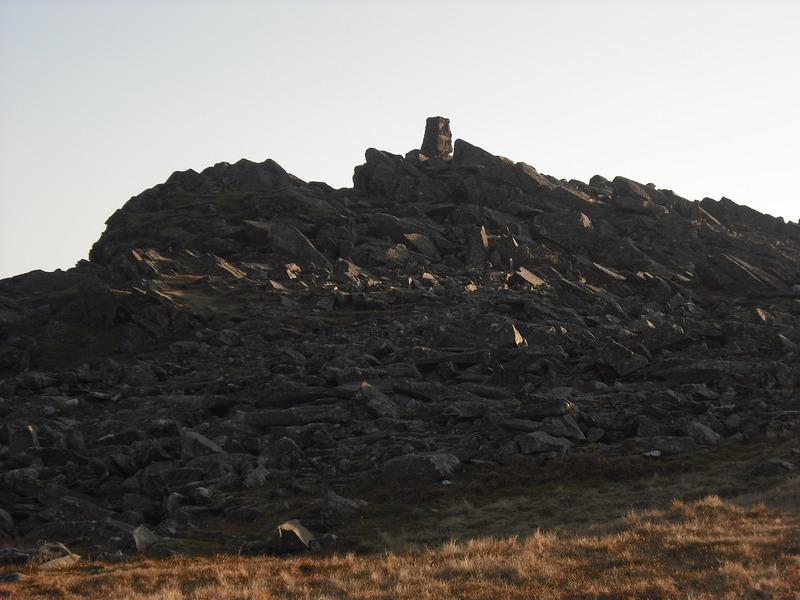