Over the years I have had quite a few vacuum flasks. Whilst the ones with the glass insides keep the liquid hot for a long time, they are rather fragile for outdoor use. There's nothing worse than slogging up to a summit, getting out your flask for a nice hot drink and finding your drink full of pieces of glass! We do have a few stainless steel flasks, but these are heavy and don't keep drinks hot for a full days walking. 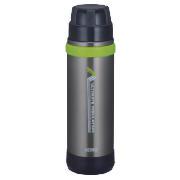 Recently I heard about the Thermos Ultimate stainless steel flask, which claims to keep liquids hot for 24hrs. It is a proper vacuum flask. In other words there is a vacuum between the two walls of the flask. Most cheaper flasks fill the gap between the walls with some sort of insulating material, as it's much cheaper to produce.

The Thermos Ultimate is available in 0.5l and 0.8l sizes and costs around £20 from Tesco Direct. This isn't cheap, but the flask has a 10 year guarantee. I ordered the 0.5l size, as it's about the right size for bike rides in the winter.

When it arrived I wanted to test it out. First I filled it with boiling water from the kettle and left it to stand for 10 minutes. Next I poured the water out and refilled the flask with boiling water from the kettle. Unfortunately, I don't have an accurate thermometer that will read up to 100 Centrigade, so my test wasn't very scientific. After six hours, the longest I would expect to keep a liquid hot during a normal day out, I poured out a cup of water from the flask. I stuck my finger in and immediately removed it, as the water was so hot. So probably well over 60C. I left the remainder of the water in the flask overnight and repeated the test the next morning, about 19 hours after I had first filled the flask. The water was still too hot to keep my finger in for more than a second.

So overall I was very impressed with the flask. It's not particularly heavy, the 0.5l version is 310g. In fact I was so impressed that I ended up ordering the 0.8l version.