I had wanted to try my Zephyros for some time, but hadn't had an opportunity to take it into the mountains. The weather had settled into the pattern of recent years, with a dry Spring, but wet and unsettled weather throughout the Summer. However, a brief window of opportunity was forecast mid-week with bad weather clearing in the afternoon, followed by a brighter day. 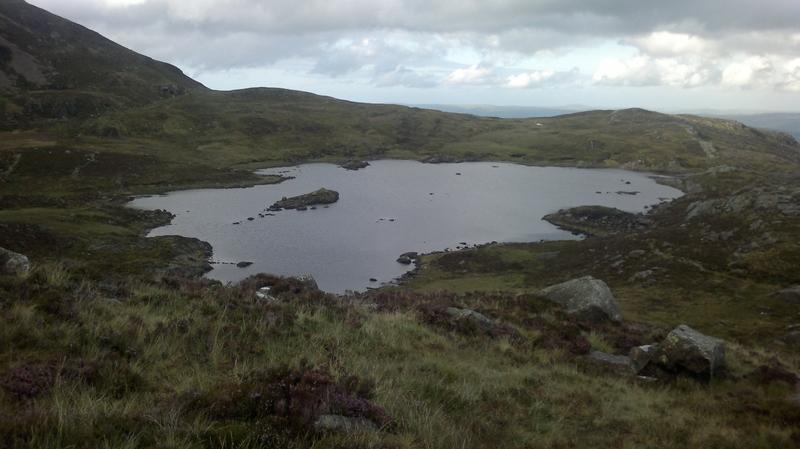 I had hoped to use one of the routes over the Arans from v-g's site. However, it didn't look as though the good weather would last long enough. So, I decided on a late afternoon ascent of Moel Siabod from Capel Curig, camping near to the summit and returning to Capel early the next morning. It was school holidays (which probably explains the bad weather), so I persuaded one of my daughters (Ella) that camping on top of a mountain in dodgy weather was a good idea. 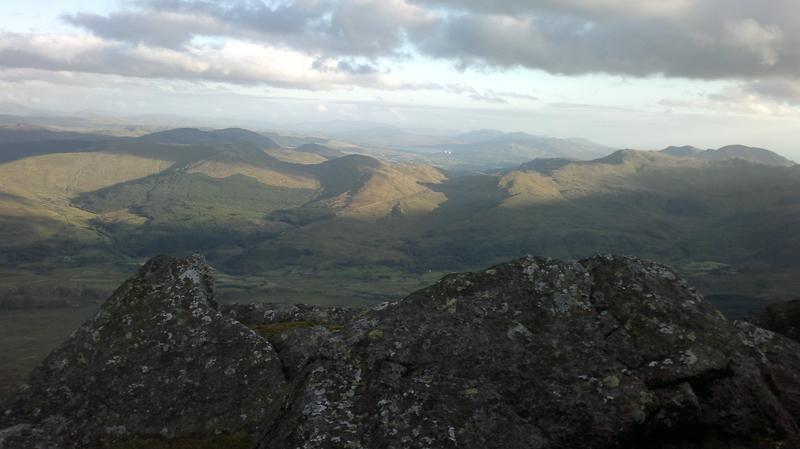 Driving over the Llandegla Moors, rain began to pour down from the grey skies, so much for the promised clear weather in the afternoon. When we reached the A5, it had stopped raining, but the sky was entirely covered in low grey clouds. Driving up from Betwys y Coed I caught occasional glimpses of the summit of Siabod trough the cloud. It wasn't raining continuously, but there were frequent heavy showers. We had tea in the Pinnacle cafe in Capel Curig before driving back to the car park near to the Bryn y Glo cafe.

Ella at the top of the Ddear Ddu ridge 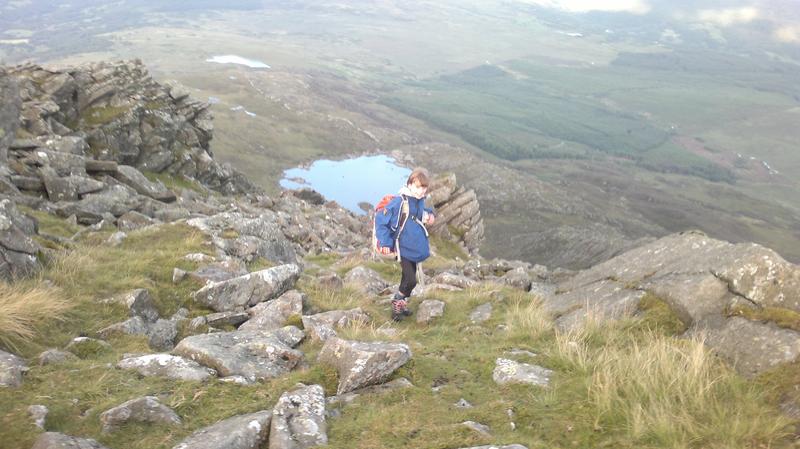 Ella sat in the car while I packed the rucksack in the rain. When we set off the sky was covered in low grey cloud and it was raining intermittently. I glanced over the bridge at Pont y ??? and noticed that the level of water in the river was well up for the time of year. After a short distance we turned right and started up the steep farm track, following the diversion that takes the path away from the farm buildings. As we made our way along the track over the moors, I could see that the summit of Siabod was covered in cloud. Rather than try and camp on the summit, I decided that we would be better off camping next to Llyn y Foel and hope that the weather was better in the morning..

Looking towards the Rhinogs

This was Ella's first trip up Siabod and I was regretting not waiting for better conditions. Also, her boots were leaking badly and since the path was running with water, her feet were soon soaked. We made our way up through the old quarry workings and stopped to stare into a couple of the flooded workings. On a sunny day the water appears in vivid colours, caused by the different dissolved minerals. However, today it just looked grey, like the sky above.

Looking NE along the summit ridge 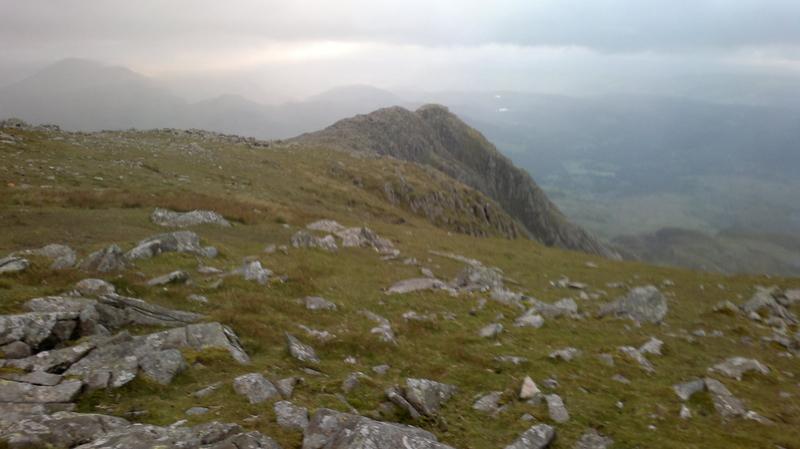 As we approached Llyn y Foel a few breaks appeared in the clouds and the summit cleared. After a bit of deliberation we decided to continue over the Ddear Ddu ridge to the summit. Unfortunately, the path past Llyn y Foel was very boggy and Ella's feet got even wetter. The Ddear Ddu ridge was a pleasant scramble, but needed care as the rock was quite greasy. Also I was hampered by carrying a heavy pack. I made my way slowly up the ridge, with Ella skipping along behind like a faun.

Zephyros below the summit 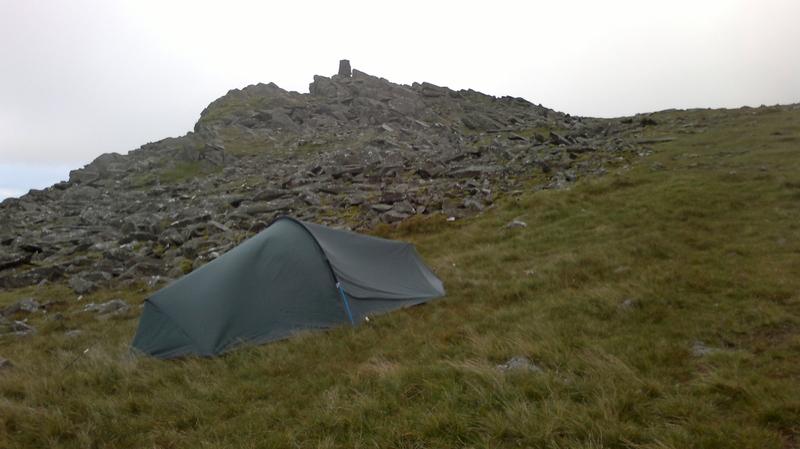 I could see the clouds racing over the summit and wondered how windy it was going to be on top. The forecast was for winds gusting up to 45mph, but falling back to 25mph later in the day. By the time we had reached the final rocks below the summit, the cloud had risen some way above the summit and there were some large patches of blue sky appearing. Once we got onto the summit ridge it was very windy and Ella sat in the summit shelter, covered by my bothy bag, while I went in search of a suitable spot to pitch the tent. 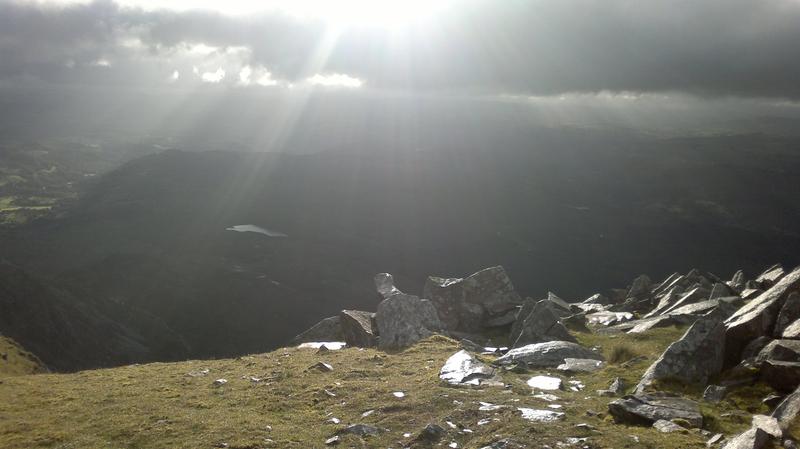 There is a nice flat area to the North of the summit, which has great views over Snowdon and the Glyders, where I pitched the tent on my last trip. However, it was exposed to the full force of the westerly wind, which was blowing me about and was definitely not the place to pitch the tent. I back tracked to the area on the southern slope, just below the summit ridge, where I found a nice flat area close to the summit cairn. 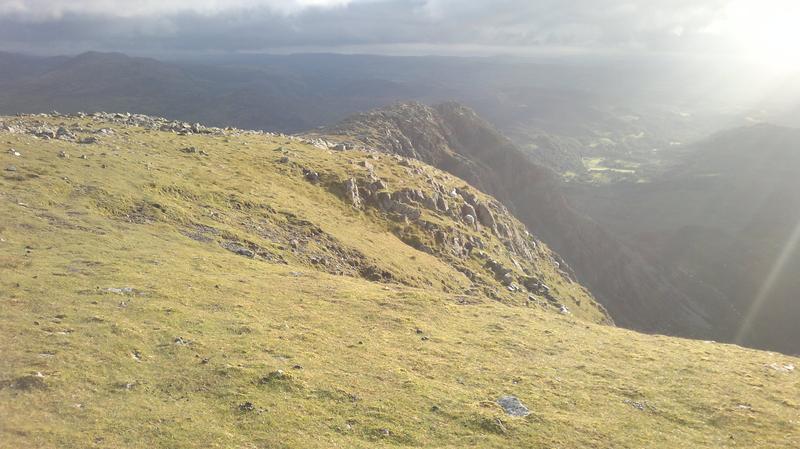 I unpacked the Zephyros and had it pitched in less than 10 minutes. I climbed back up to the summit shelter and fetched Ella and we put all our gear into the tent. The Zephyros 2 is very cosy for two and you can only just fit two sleeping mats side by side. It was now about 8:30pm and the light was fading. I found it was possible to cook in the porch, but you really need to have the flysheet open to avoid setting light to the tent! After a cup of hot chocolate and some porridge and sultanas, we settled down for the night. Contrary to the forecast the wind didn't drop at all during the night. We could hear the roar of the gale on the other side of the summit ridge and blasts of wind that made it over the ridge rattled the Zephyros. However, the tent stood up to the wind and sharp showers during the night without any problems. 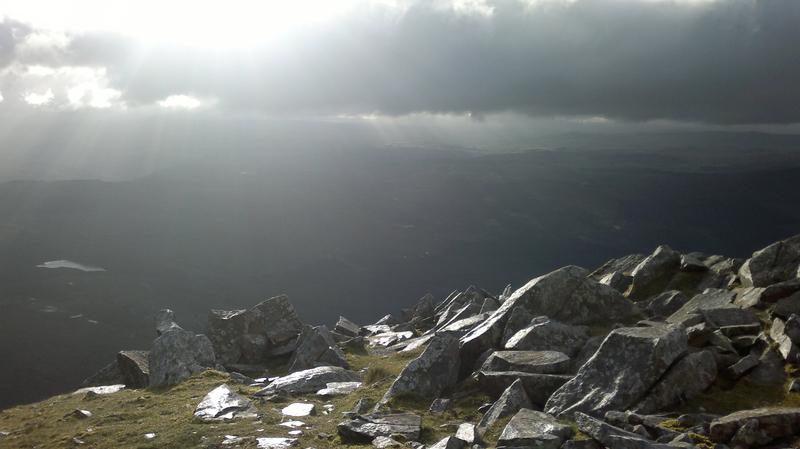 The wind kept us awake most of the night and we dropped off to sleep about 4:00pm, waking again about 6:30am. Wisps of cloud were blowing over the summit and the wind hadn't dropped at all during the night. After a cup of hot chocolate we decide to pack up and go down to the valley for breakfast. We crossed over to the northern side of the summit ridge and dropped down below the crest, to avoid scrambling over the rocks. We were now exposed to the full force of the wind. I was being buffeted and Ella was struggling to stay on her feet. I could see sheets of rain blowing along the Ogwen Valley over Capel Curig. Luckily, although we were exposed to the gale, the rain showers passed us by. It felt much more like Autumn than early August.

Finally out of the gale 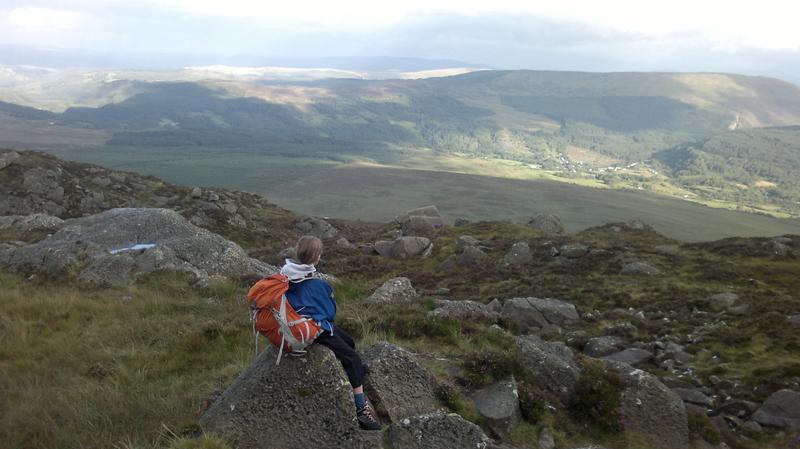 Once we started dropping down the southern slopes we were sheltered from the wind and made quick progress down the eroded path back to the end of the track. We got back to the car about 9:00am and went straight round to Pete's Eats for breakfast!

You can read my account and see some photos of a much better night's camping on the summit in April 2010 by clicking here .