Day One - a Scramble on Tryfan.

You can see more photos from the trip here

For some time I had wanted to do a two day backpack around the Arans, starting from Cwm Cyarch and climbing Aran Fawddwy, then making my way along the duck boards and climbing Glasgwm to camp near Llyn y Fign.

After a spell of settled weather the rain had arrived. However, the MWIS site was predicting decent weather over Snowdonia. I left home shortly after 7:00am in a steady drizzle and headed towards Welshpool. As I started heading up the Tanat Valley, I could see the hills on either side covered in cloud, while the rain didn't show any signs of stopping. I decided to carry on driving through Cwm Hirnant to Bala. This would give me the option of continuing onto Capel Curig if the weather was still bad, or ascend the Arans from the Bala side. As I dropped down towards Bala, the weather was less awful, but both the Arans and Arenigs were submerged in cloud, so I continued onto the A5 towards Capel Curig.

When I arrived in Capel Curig, the weather was much better and most of the tops were clear of cloud. I parked in the small car park behind Joe Brown's shop and studied the map. I needed to be back home early on the next morning, so wanted an overnight camp on a summit not too far from the car. I had already camped on the Carnedds twice this year, so planned a route over Glyders. I decided to leave the car where it was and walk along the old A5 towards Ogwen, then traverse the summits back to my starting point.

I have done day walks from Ogwen over the Glyders to Capel Curig several times, but never camped overnight on the summits. My plan was to scramble up the Gribin Ridge, traverse Glyder Fach and then camp somewhere near Llyn Caseg y Fraith. However, it was already 10:30am and it would be completely dark around 6:00pm. Also, I was carrying a load so the plan might be too ambitious.

I set off along the old A5 towards Ogwen enjoying the views from the track. When I got to the foot of Tryfan it was obvious that I didn't have time to complete my original route. I decided on a scramble up Tryfan, followed by Bristly Ridge if I had time. I have never climbed the West face all the way to the summit and have done the North Ridge loads of times in the past. So I decided to try and make up a scrambling route up the West face. I didn't have either my scambles guide or the climbing guide, but didn't anticipate any insurmountable problems.

I climbed up towards the far end of Milestone Buttress where I started up Pulpit Route, which is an easy rock climb on big holds. The rock seemed very greasy, which is unusual for Tryfan, as the rock on the popular routes is very clean. I avoided Ivy Chimney, which would have proved problematic with a big sack and continued up what is the normal descent gully from the top of Milestone. Near the top there were a series of rocky steps, which didn't look too hard. People had obviously been this way before and it didn't look too far to easier ground above. However, the rock was like soap bars and the climbing felt very insecure. About 60 feet above the scree was a short wall. This didn't appear too hard, but all the holds were outward sloping. The wall was situated above a decent size ledge, so I wasn't too worried about trying to climb it. About ten feet above the ledge I had to make a high step onto a big sloping hold. As I was pushing up on the hold my foot skated off and I started to fall. I flattened myself against the rock, so there would be less chance of me bouncing off the ledge, as that would send me down the 60ft drop into the gully below. Unfortunately, as I slithered down my left foot caught on a nubbin of rock and got bent right up. There was a sharp pain in my calf muscle and I dropped in a heap on the ledge.

I got myself into a sitting position and moved my foot gingerly. Luckily, I hadn't done any serious damage. I considered going down, but reversing the slippery rock below me while carrying a heavy pack didn't appeal. I could see a traverse line to the left, which lead to a quartzite band, which didn't look hard. However, the section above this was hidden from view round a corner. It appeared as though I was only a short distance from where the steep ground merged into the North ridge, so I decided to go and have a look. I teetered across the grassy traverse onto a ledge. Gaining the quartz band, I could see that there weren't any serious difficulties above it. Finally I emerged onto the crest of the buttress, where I met an Irishman trying to descend. I told him that I didn't think that it was a good idea, but he seemed to try anyway. Later on, making my way up towards the North Ridge, I was pleased to see that he had abandoned his attempt and was climbing back up. 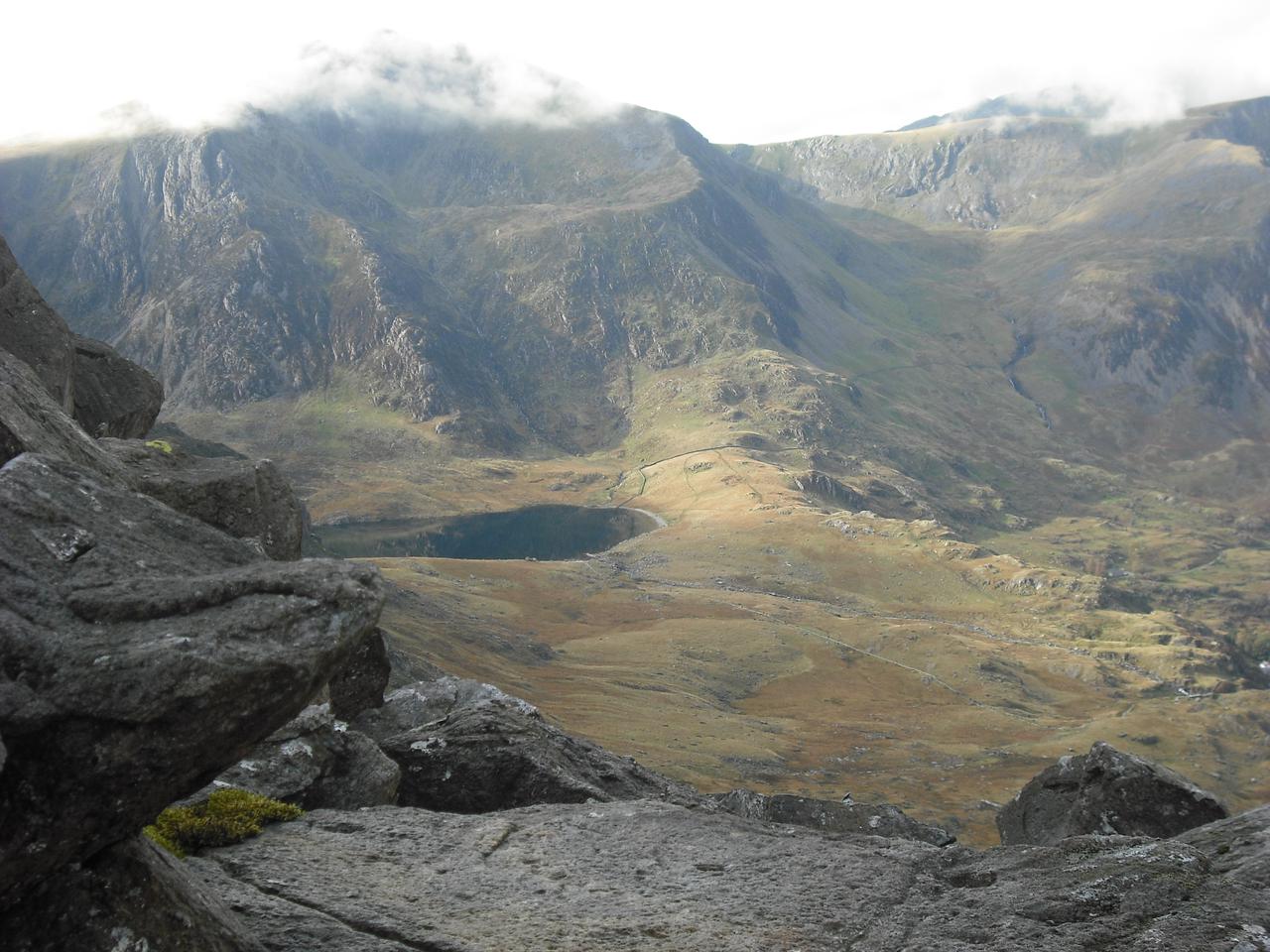 By this time the clag had descended and the rest of the ridge was misted out. The rock on Tryfan, especially on the popular routes, is very clean and not normally slippy when wet. However, today the whole mountain was like a skating rink and it wasn't just me who was slipping and sliding. I stopped on the summit for a few minutes where I took a group photo for three men.

I had hoped to continue up Bristly Ridge. However, it was now mid afternoon and given the slimy rock on the North Ridge, plus my heavy sack. I decided to change my plans yet again. I descended the steep screen slope from Bwlch Tryfan into Cwm Tryfan. There was plentiful water supplies down there and I thought I might set up camp in the Cwm. It was shortly after 4:00pm by the time I reached the stream and I was now below the clag. Looking up I decided that I had just about enough time to climb up the track to the col and camp somewhere near Llyn Caseg y Fraith. I filled my water bottles and after a short rest, I plodded slowly upwards, reaching the col around 5:00pm. I was now back in the clag and given the poor visibility and rapid approach of darkness decided to set up the tent a couple of hundred yards from the edge.

I had just managed to get the tent set up and all my stuff inside when it started to rain. The rain blown by a strong gusty wind continued for several hours. After it had stopped I unzipped the tent door and looking outside I could see the sky was almost completely clear. The wind was gradually dropping and I had a peaceful night.

One disadvantage of camping at the end of October is it's dark for about 12 hours. I cooked and listened to a couple of podcasts on my phone before drifting off to sleep. As there was almost no wind, I slept quite well, waking around 6:00am. Sunrise was shortly after 8:00am and it doesn't really get light enough to do much before 7:00am, so I spent an hour making drinks and eating breakfast. 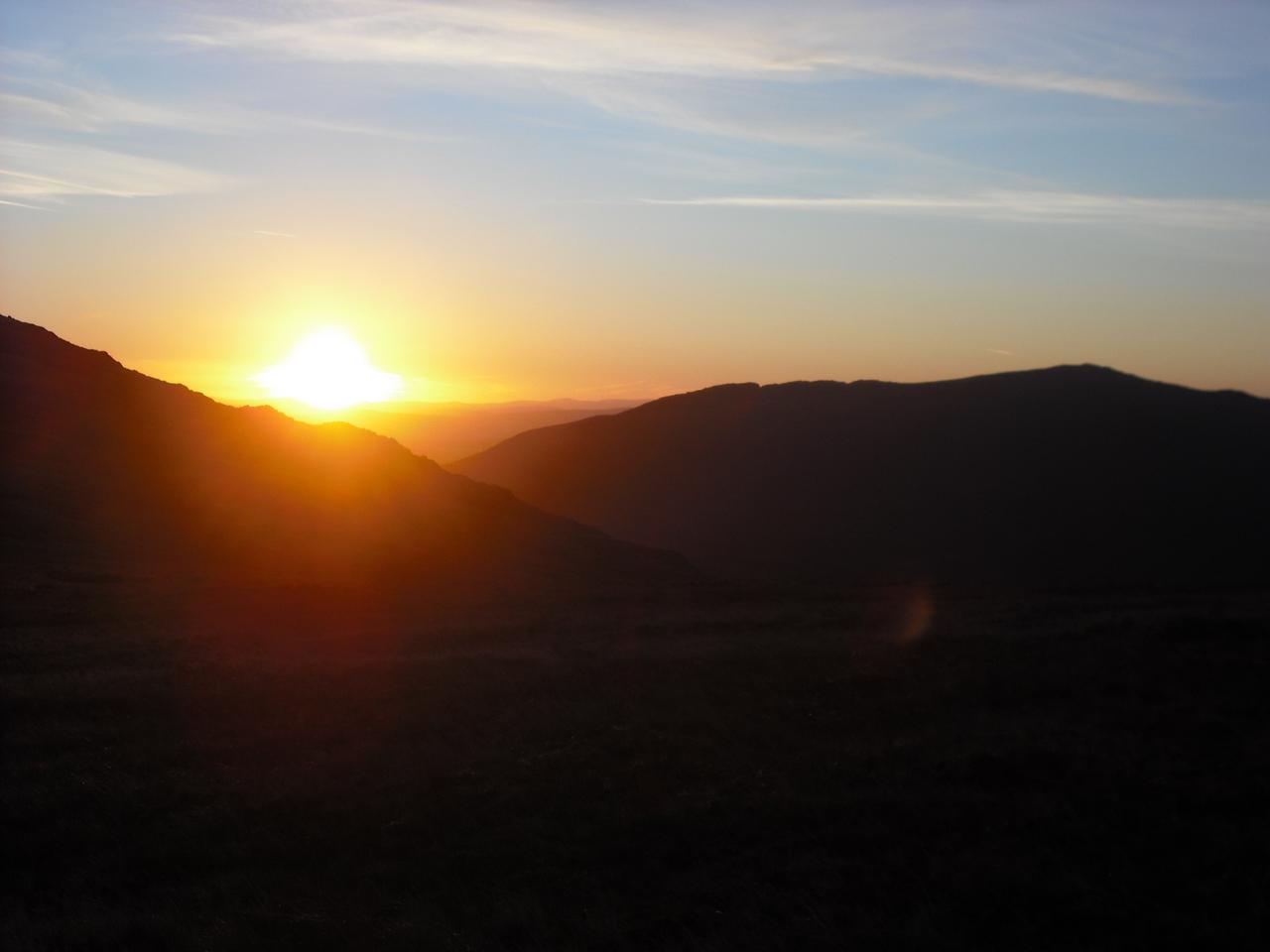 The weather was perfect. There was only some high cirrus and a slight breeze. I was ready to go shortly before 8:00am. I was walking almost due East, so had perfect views of the rising sun. I was a bit concerned about how my leg would be. Luckily, apart from some muscle pain my leg was fine. The main summits of the Glyders are justifiably very popular. However, it's unusual to see anyone on the section between Glyder Fach and Capel Curig. 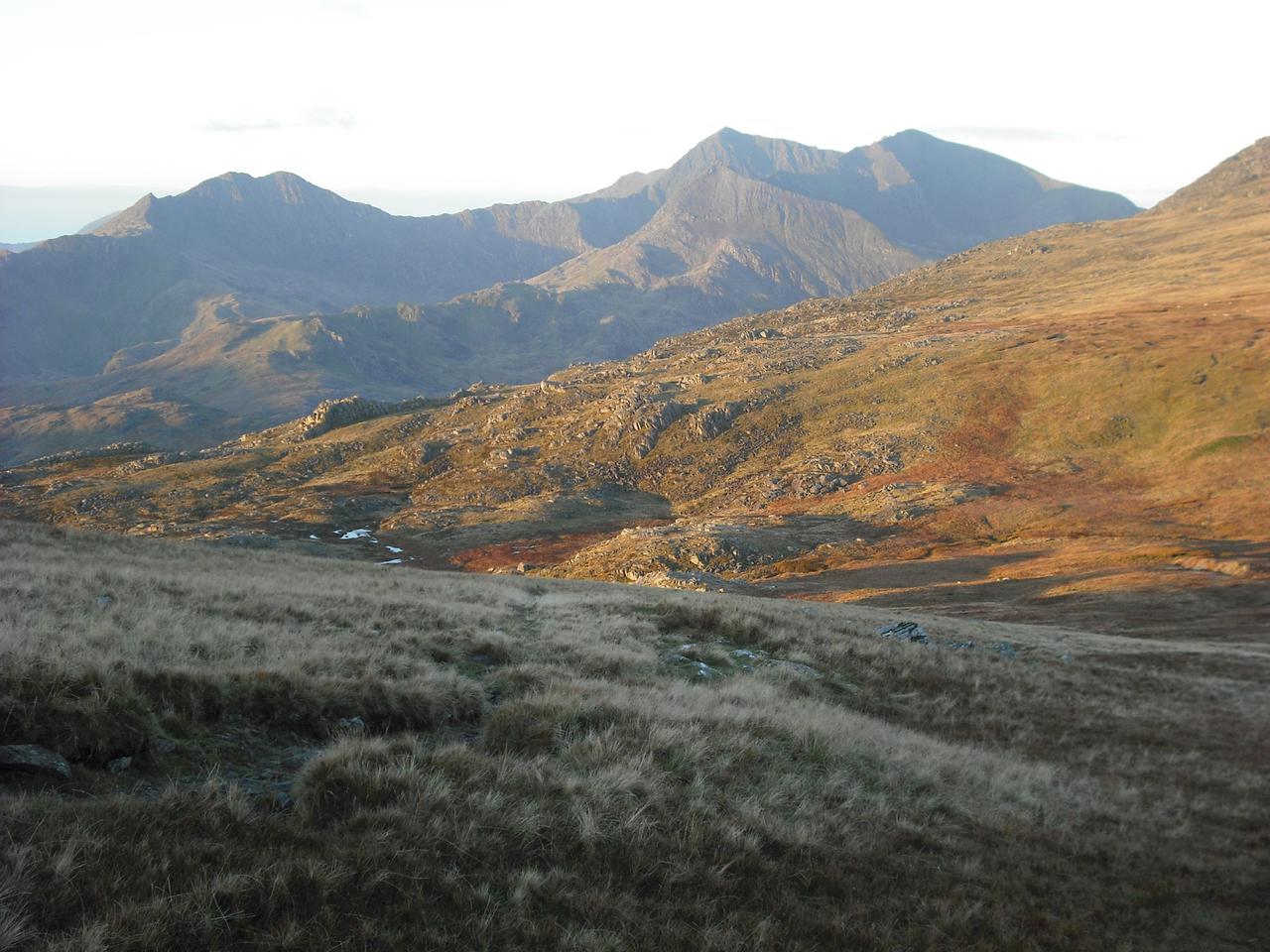 There is a small rock outcrop near to the lake, which provides a great viewpoint over the east face of Tryfan. Readers of Poucher's guide will recognise this as the site of the photo on the frontispiece. I made my way past Llyn Caseg y Fraith and up to the summit of Y Foel Goch. For many years this was known as the "Nameless Peak" (see Poucher's Guide). It wasn't given a name on the OS maps, but in recent years the OS have shown it as Y Foel Goch. The summit is a great view point, for both the Glyders and the Carnedds. After spending a few minutes taking photographs, I made my way over towards Galtt yr Ogof. It's possible to bypass this summit, but it's well worth the short detour for the excellent views. 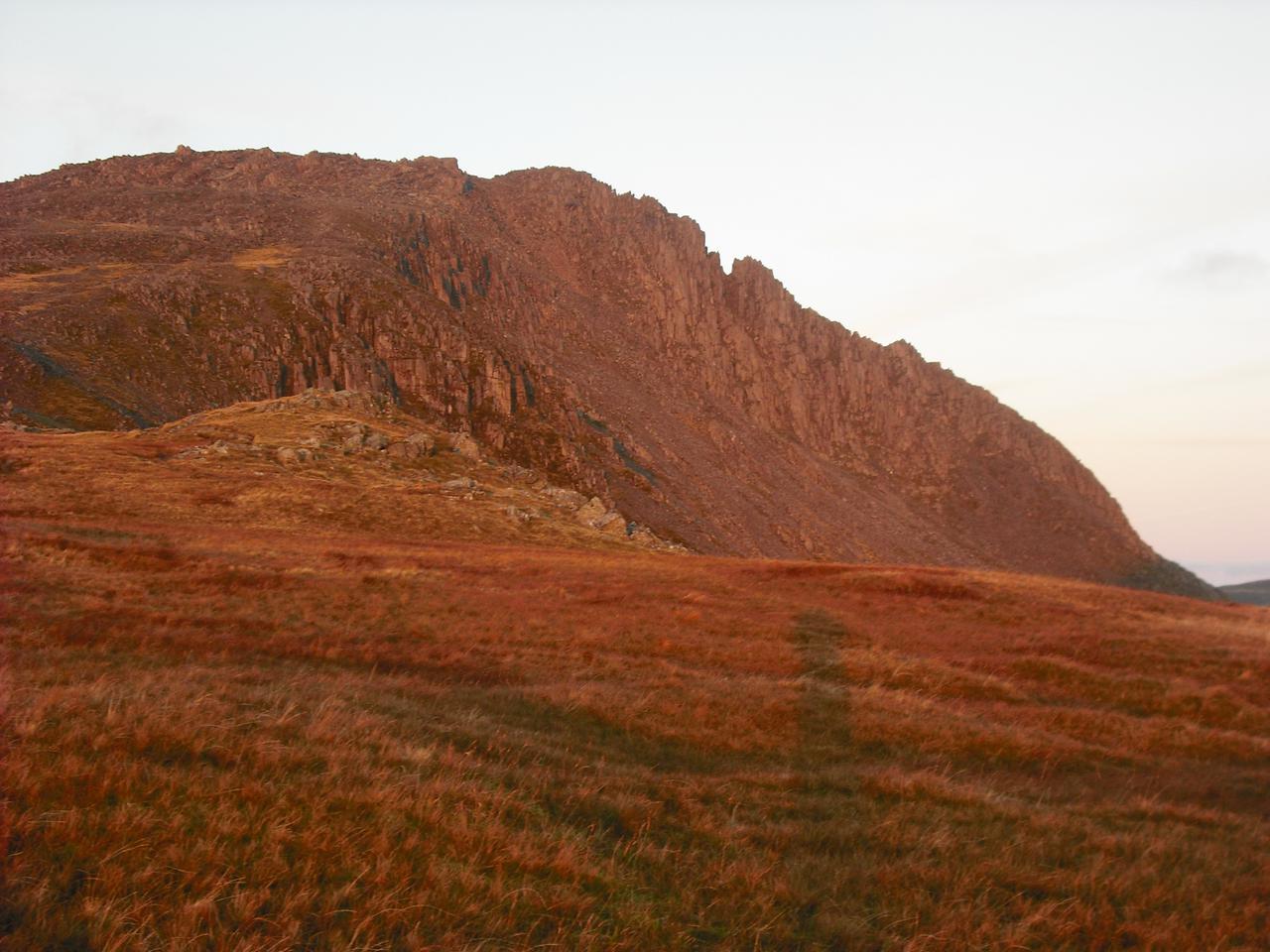 Leaving the summit of Galtt yr OgofI, I began the long descent towards Cefyn y Capel. This is a long flat ridge which ends above Capel Curig. There are good views of the Snowdon Horseshoe and directly in front of you Moel Siabod. This section is usually boggy, but after the long dry summer I had expected it to be fairly dry. However, there must have been some heavy rain in Snowdonia recently, as it was indeed very boggy. My old Hi Trek boots are distinctly non waterproof and my feet were soon very damp. I was glad that I hadn't decided to wear trail shoes. 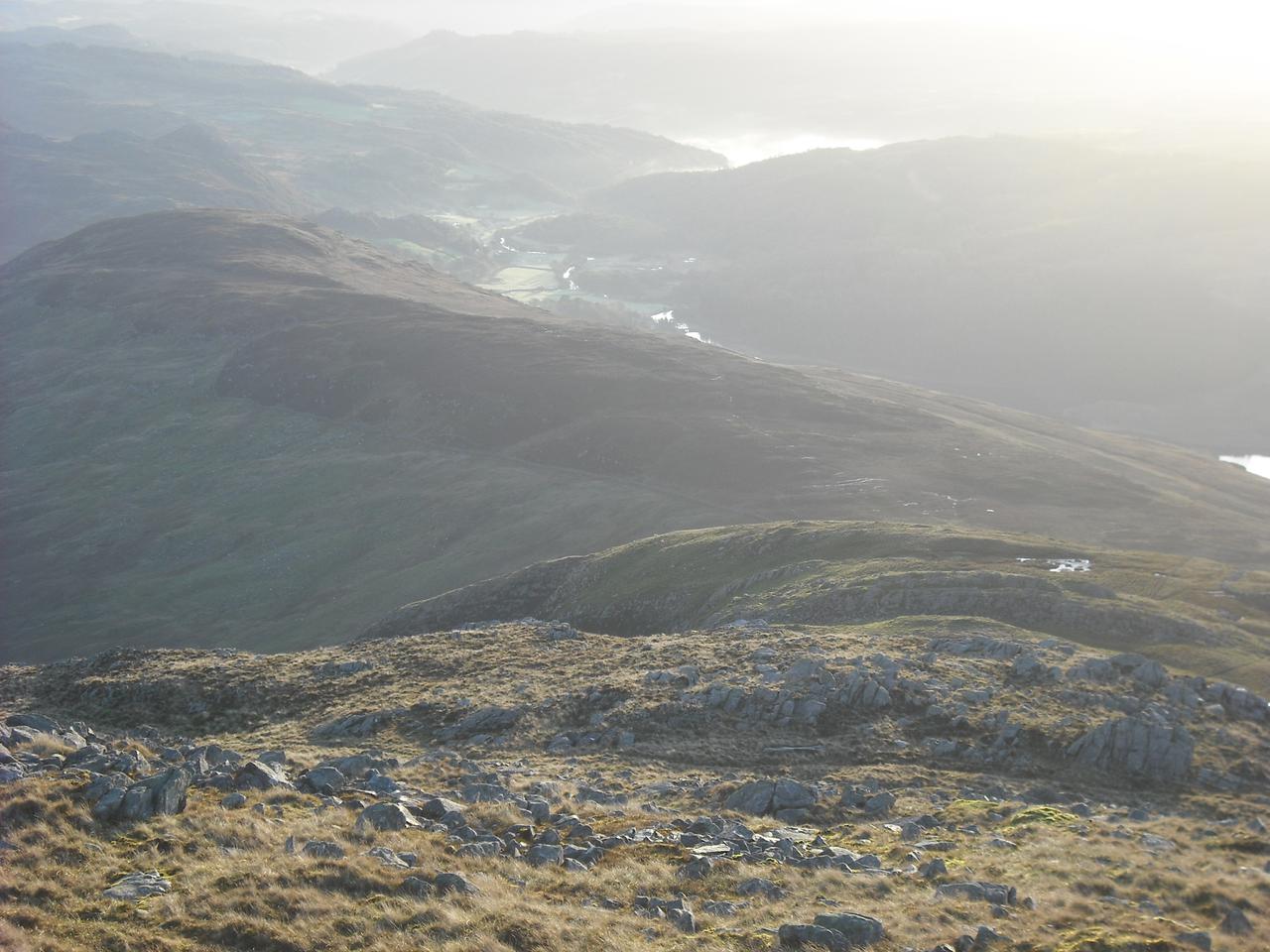 There are a number of paths you could follow, but essentially you just follow the crest of the ridge to its end. Finally the path drops down and emerges just behind the farm next to the track leading to the car park. I hadn't met a single person all morning, until I got back to the car park.

After getting out of my wet boots and socks, I drove round to Pete's Eats for a fry up.

You can see more photos from the trip here .