Day One - Tanygrisiau to Moelwyn Mawr.

This was another trip shamelessly nicked from v-g's web site. I was hoping to do it with the children, but the weather forecast looked too dodgy to take them. The initial plan was either to do this trip, or another one over the Arans. Read on to see why I didn't do the Arans trip. 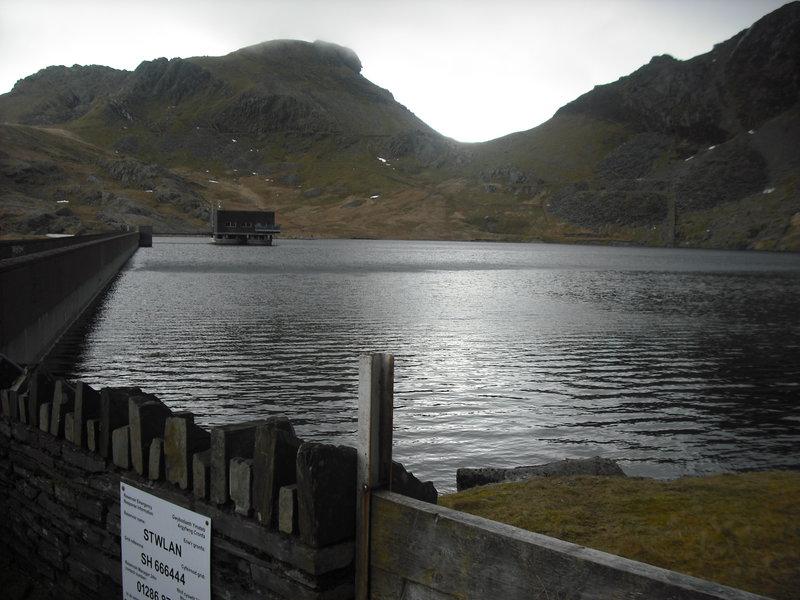 MWIS forecast good chance of clear summits, but with heavy hail showers blowing in. I was hoping to complete my aborted trip over Aran Benllyn, camping at Creiglyn Dyfi and walking out the next day. As I drove through Whitchurch the heavens opened, but once I arrived at Wrexham the roads were dry and the sun was out. However, as I approached the A5 outside Corwen, I could see thick cloud in front. As I arrived at the traffic lights at the end of the A5104, it began pouring with rain. Hoping it might just be a heavy shower I turned off the A5 towards Bala. After three or four miles I could see that there were no breaks in the cloud and it was absolutely pouring down. There didn't seem to be any point in continuing, so I turned the car round at set off back along the A5 towards Capel Curig. 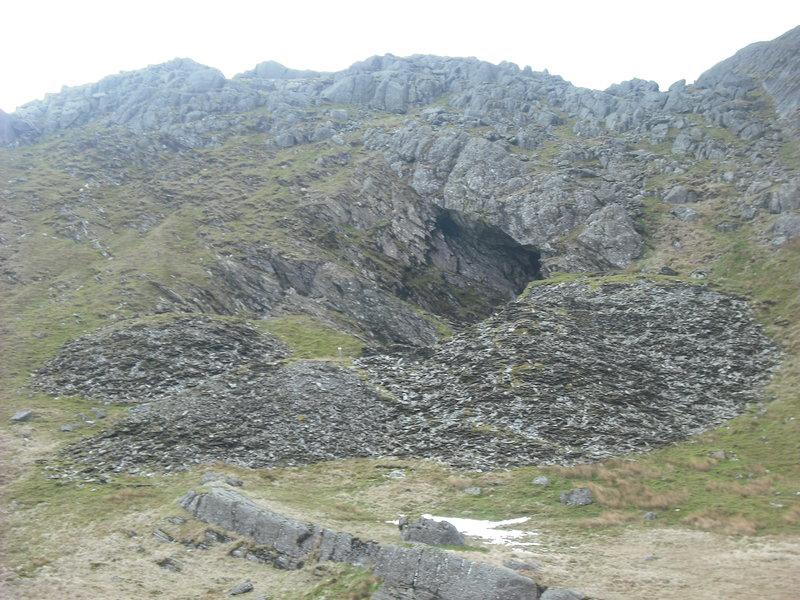 After only a few miles along the A5 it had stopped raining. As I approached Pentrefoelas I could see that the most of the main summits were either cloud free, or only lightly covered. However, I didn't think that the weather would be suitable for camping on one of the higher summits around Capel Curig, so I turned off along the B4407 towards Blaenau Ffestiniog . I parked at the small car park at the end of the access road to Llyn Stwlan. The skies were very grey, but the summits of the Moelwyns were clear of cloud. 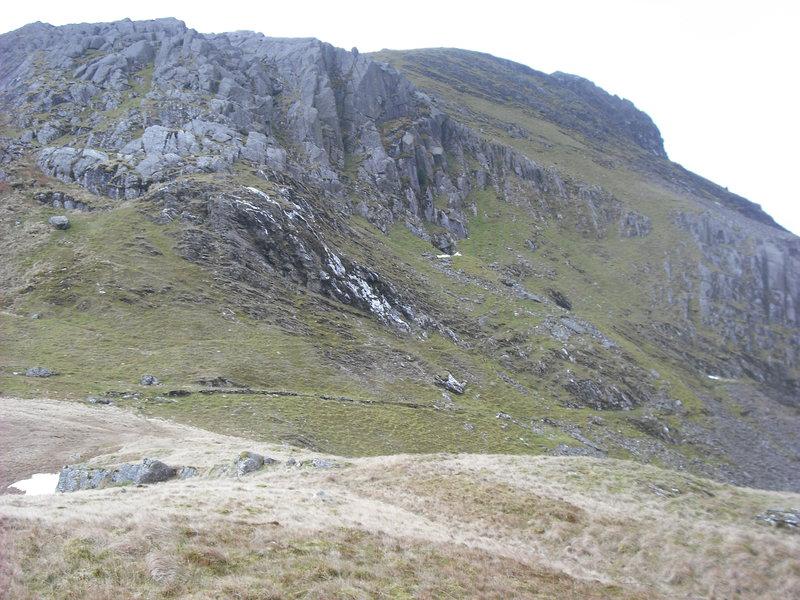 I packed my sack and glanced at my watch. It was now 4:00pm, but I reckoned that I would have more than enough time to get to the summit of Moelwyn Bach. I followed a man walking his dog up the road towards the resevoir, where I filled my water bottles. It's not possible to walk along the top of the wall to get to the far side, so I had to descend a short distance to get back to the start of the path. I didn't particularly want to go up to the col at Bwlch Stwlan between the two peaks, as I would have to descend from Moelwyn Bach over the same ground. So thought I would climb up the end of the South Ridge and traverse it to the summit of Molewyn Bach before descending to Bwlch Stwlan. I worked over to the left towards the base of the ridge, following a line of small concrete marker posts. As I gained height, I could see a huge hole in the hill, presumably some old quarry workings. Looking up at the ridge I could see that I would have to climb over a rocky section to gain the crest. From below this didn't look too hard, but I was conscious that I was pressed for time and I didn't want to waste time if I picked the wrong line up the hill. Luckily, there appeared to be a terrace that ran across the face of the hill, leading to the col. There was a distinct path along most of the terrace, with a couple of interesting sections where parts of the path had collapsed. 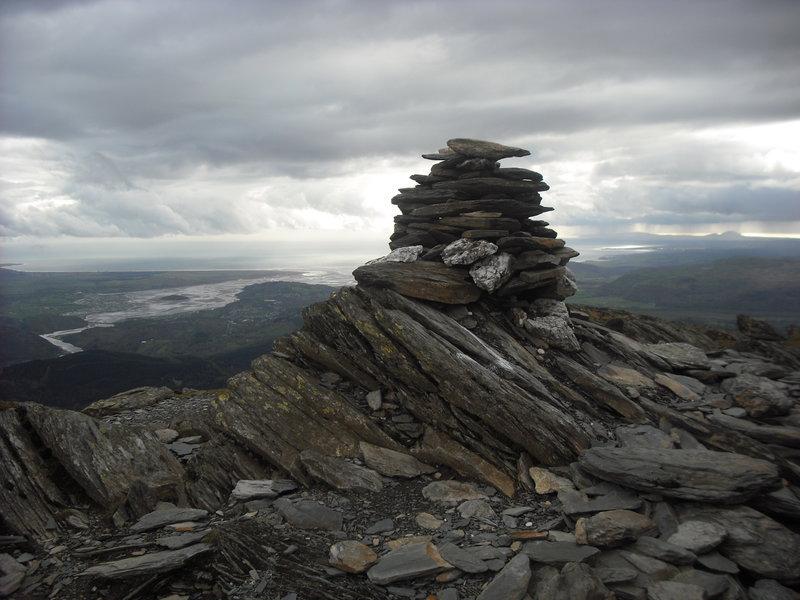 At Bwlch Stwlan I was exposed to the wind blowing in from the West. I thought of dumping my pack at the Bwlch while I climbed up to the summit of Moelwyn Bach. For some stupid reason I was worried that someone might take it, even though it was late in the day and there was nobody else about. Thus, I ended up carying it all the way to the top and back again. Most of the path up towards the summit is on the East face, which was sheltered from the wind. However, once I gained the summit ridge I was exposed to its full force. The clouds had been coming and going around the summit while I was climbing up, but when I reached the summit cairn there were good views in all directions. I tried to brace myself against the cairn to take some photos, but it was almost impossible in the buffeting wind.

After a couple of minutes on top, I retraced my steps to the col and began the ascent of Moelwyn Mawr via Craigysgafn. I could see sheets of "stuff" blowing in from the west. Within a few seconds I was being shot blasted by small hail stones. I was exposed to the full force of the wind for most of the climb and the layer of hail on the rock made the scrambling sections interesting. I was very relieved when the hail ceased just before I got to the summit cairn. 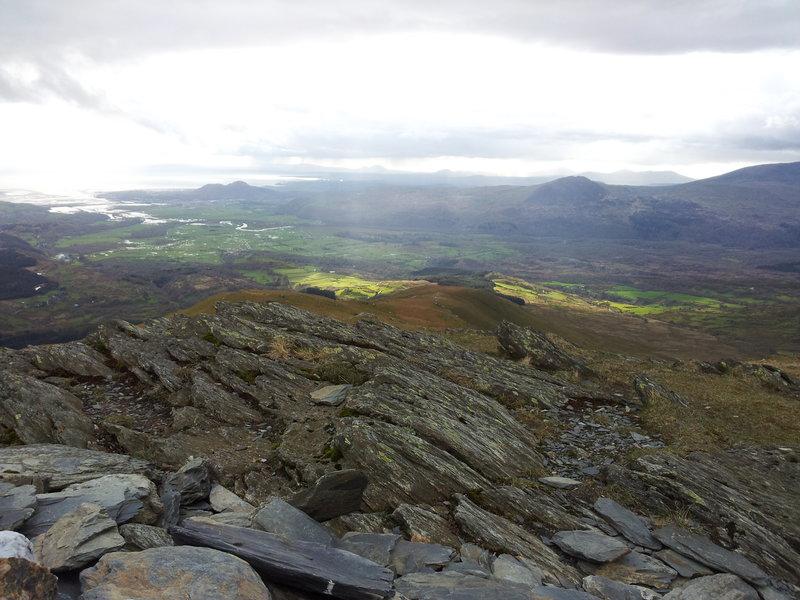 There is a small grassy platform just below the summit cairn, which seemed quite sheltered. However, I was worried that the wind might shift round during the night and in any case the summit was completely misted out. I knew that somewhere there was an easy descent back towards Llyn Croesor, but in the clag I couldn't see an easy way down the steep ground. I pulled out the map and decided to descend the North West ridge and then traverse over towards Llyn Croesor. It was now well after 6:00pm and I wanted to find a good sport before it went dark.

I hurried down the North West ridge hoping to drop out of the clag. I wasn't entirely sure exactly where I was and in the words of the great HW Tilman "No one goes so far, or so fast, as the man who does not know where he is going". Eventually I dropped below the clag to fine views of Cwm Croesor. It didn't look as though I could traverse easily and the alternative was a long descent, followed by an equally long climb back up. 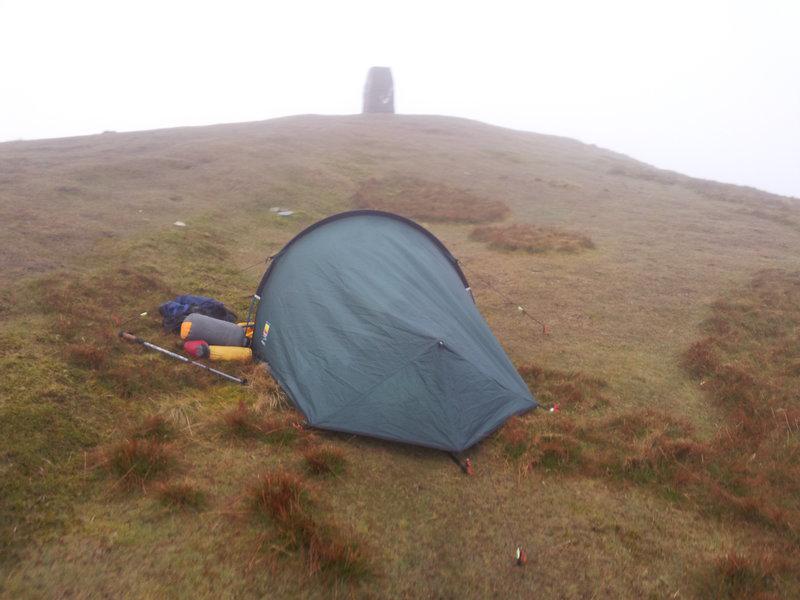 I made the decision to do what I should have done in the first place - camp on the summit. I had lost just over a hundred metres, so it was a bit of a slog back up. When I finally got back there, the wind seemed to have dropped considerably, but it was still misted out. I was wet through and my fingers were freezing as I struggled to get the tent up. I had just finished putting it up when suddenly the clag cleared and I could see from horizon to horizon. The sun was setting and it would be dark soon. Once I had thrown everything into the tent, I went for a short walk around the summit area. In the perfect visibility I now easily found the start of the descent path. I set a waypoint on my GPS, so I could find it again in the morning.

I made my way back to the tent to get into some dry gear and cook tea. The spot I had chosen turned out to be very sheltered and I had a quiet night.

I was up around 6:30am. Looking out of the tent the summit was still shrouded in mist, but the wind had dropped and it wasn't hailing or raining. As I was packing away the tent, there were several spells of just a few seconds when the cloud would clear and I could see the views. I waited for a while, but it didn't seem as though the cloud would disperse for more than a few seconds at a time, so I set off. I found the start of the descent easily now I knew where it was and had soon dropped out of the clag. 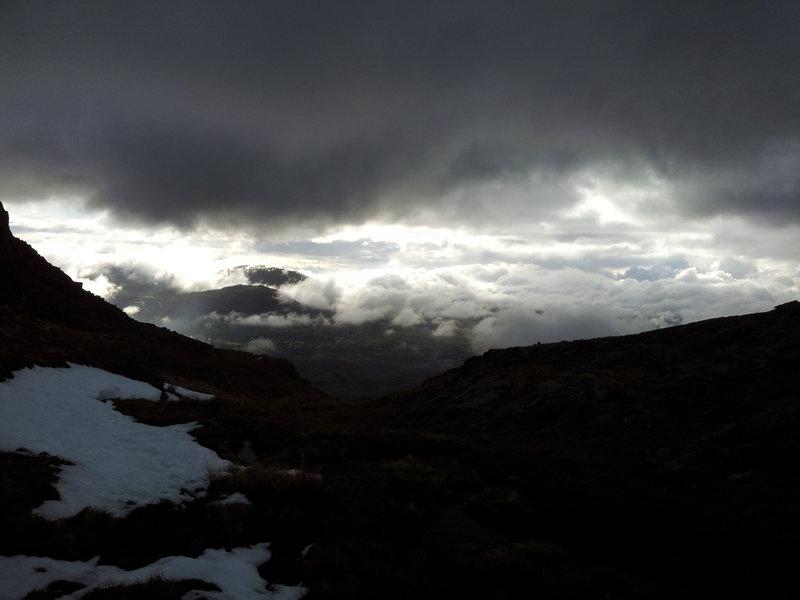 I made my way over towards Moel yr Hydd and was treated to some mini cloud inversions in the valley over Blaneau. The summit of Moel yr Hydd was clear and I paused to take some photos before descending towards the old quarry workings. I made my way down through the levels towards Llyn Cwm Orthin. The weather was gradually getting worse as I descended. The clouds were dropping and the drizzle was turning into persistent rain. However, I managed to get back to the car before it got too bad. 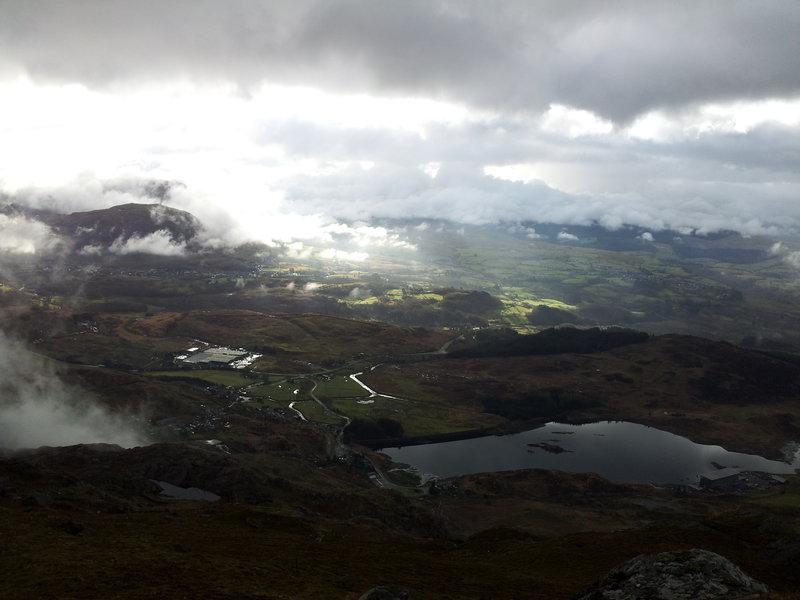 Overall a very satisfying trip. I was lucky that the gaps in the bad weather came at just the right moments and on the second day I got back to the car just before it got really bad!

Some notes about gear:

Once again my Rab Vapour Rise trousers and jacket worked superbly. Although they absorbed water my skin was dry. In the morning the trousers were heavy with the water they had absorbed. As it wasn't far above freezing, I wasn't looking forward to putting them on. However, the inner fleece lining felt dry and far from having cold legs, I immediately felt warm.