I had planned to go for a walk in North Wales, but the MWIS forecast wasn't too good. There was supposed to be a good chance of clear summits, but with hail showers possibly merging into longer periods of continuous downpours. The weather at home wasn't too bad, so i decided to drive over without making any definite plans about my objective. 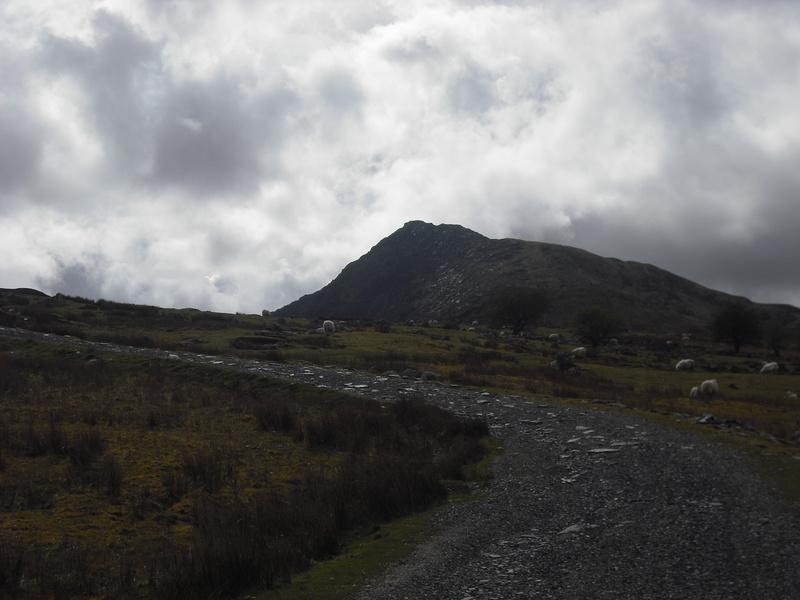 As soon as I dropped down off the A5104 towards Corwen it looked as though the "showers merging to form longer periods of hail", was the most likely option. I decide to drive into Capel Curig and see what conditions looked like there. True to form its was pouring down and all the summits were covered in dense grey cloud. Thinking that the outlying summits might have better conditions I drove over to Llanberis and thence towards Waun Fawr. Dropping down into the village I could see that M. Mawr was misted out and it was still raining in the valley. Continuing along the road to Rhydd Ddu, I pulled into the car park to look at the Nantlle Ridge. This too was misted out, but there appeared to be faint hope as the ridge connecting ???? to Moel Hebog was partially clear. 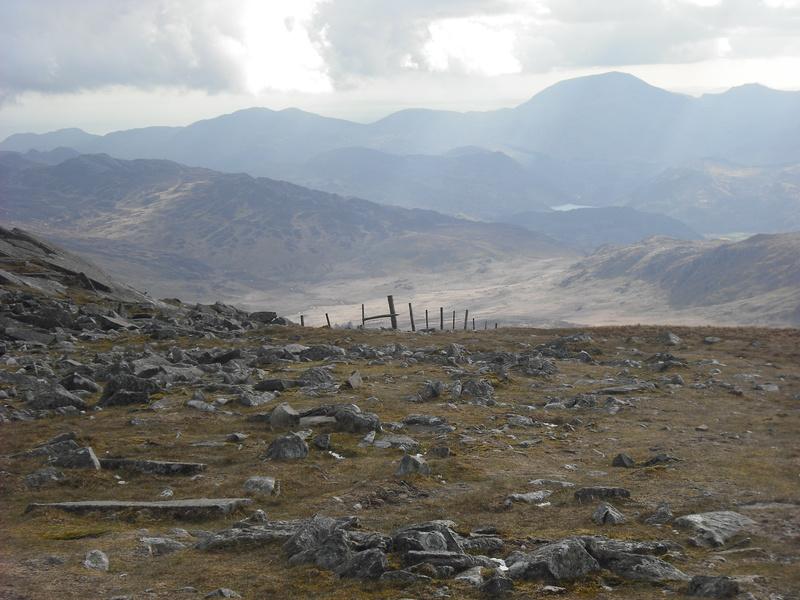 I drove on towards Beddgelert thinking that I might climb Moel Hebog, then continue along the connecting ridge towards ??? finally returning via the forestry tracks. However, when I parked in Beddgelert it was raining quite hard and the mist had descended even further. Clutching at straws I decide to continue my grand tour of Snowdonia and drove down towards Blaenau Ffestiniog, thinking that I might do another walk in the Moelwyns. I could see that Cnicht was clear, but when I arrived in Blaenau Ffestiniog it was raining even harder and all the surrounding peaks were covered in the thick grey clag. It was now after 2:00pm and I was considering doing a low level walk in the rain. Somehow I felt that the weather would improve later in the day, so to complete my circuit of Snowdonia I set off over the Crimea Pass towards talkytoaster. As I approached the summit of the pass, I could see that the cloud over Moel Siabod was starting to lift above the summit and the rain was slowly dying out. By the time I reached the car park outside Bryn y Glo in Capel Curig, the rain had stopped and the sky was brightening.

Snow on the Carneddau 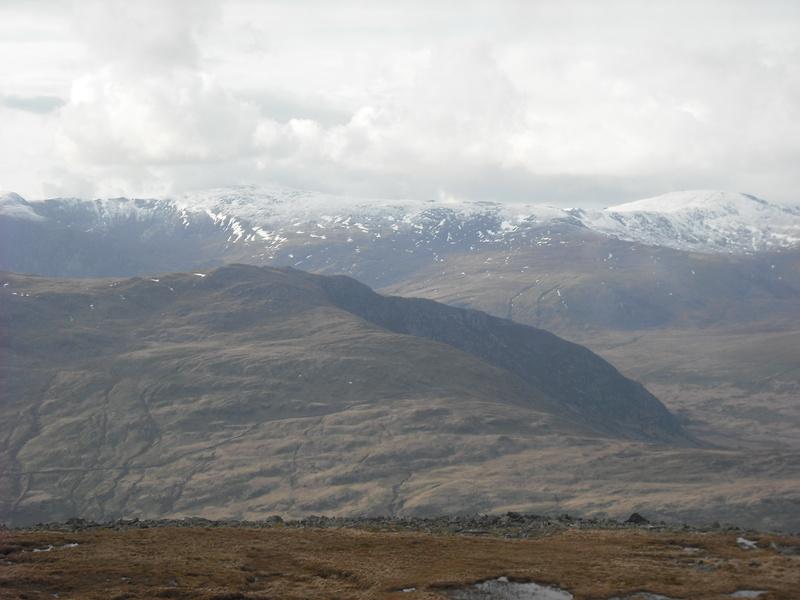 It was now 3:00pm and I decided on an overnighter on the summit of Siabod. This is one of my favourite mountains. It's isolated position gives it grand views over most of Snowdonia. This would be my third summit camp on Siabod. The first in May time was in perfect weather. The second with one of my daughters, was in very uncertain weather, with high winds on the summit. However, we were luck and despite the very high wind we had good views, but a very noisy night as the tent flapped in the wind.

Zephyros Pitched below the summit 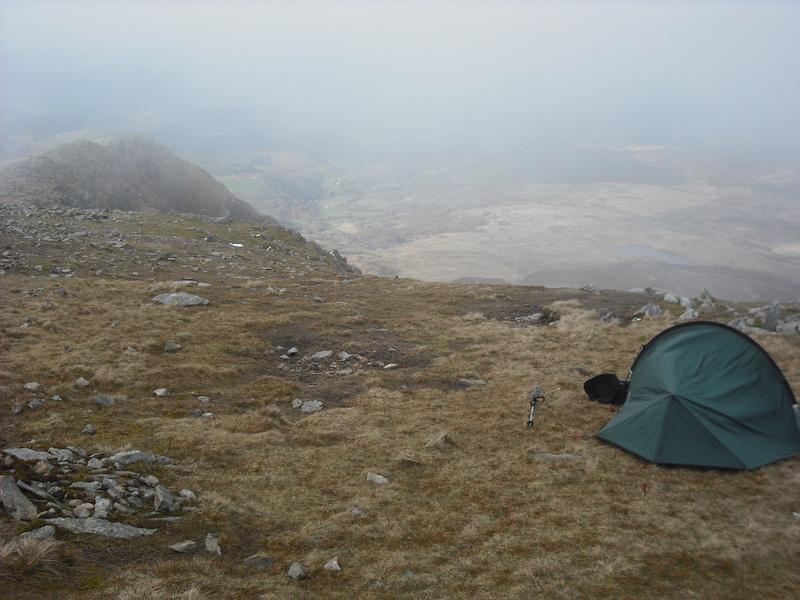 I packed my sack and was soon making my way past the water falls at Pont y Cyfnyg and up the farm track towards the mountain. As I gained height I could see the tops of the Carneddau were covered in snow. Earlier in the day I glimpsed a covering of snow on Siabod through breaks in the cloud. However, it appeared to have melted during the day. As I climbed up the huge grey clouds began to disperse and soon there ere large blue patches everywhere. Visibility was excellent, the rain and cold air ensuring there was no haze to obscure the views.

Sunset Over the Carneddau 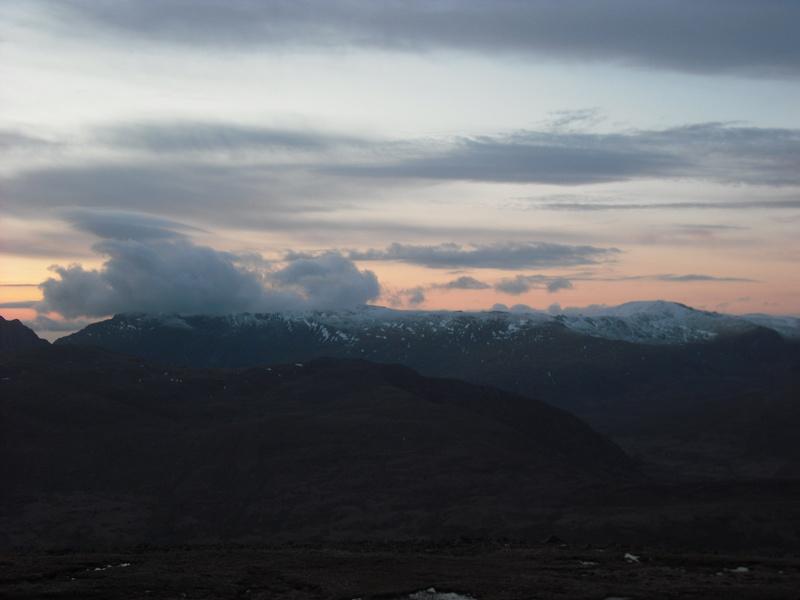 I intended to climb the Ddear Ddu ridge, so turned left at the ladder style at the end of the farm track. I mad my way through the old quarry workings and climbed up to the small col above llyn y Foel. Dropping down towards the lake the ground was very wet. By weaving about and some tussock hopping I avoided getting my feet too wet. I could see someone at the bottom of the Ddear Ddu ridge, but this was the only person I saw all day. I stopped to fill my Platypus bottles from the lake before beginning the ascent. Although the rock was wet, it didn't seem greasy. I kept close to the right hand side of the ridge, to enjoy the exposure. The ridge always seems longer than it looks from below. Not that it matters, as the climbing is so enjoyable. Eventually I arrived at the final rocks below the summit cairn and made my way onto the summit ridge so I could enjoy the views over the far side. There was a stiff breeze and it felt very cold. 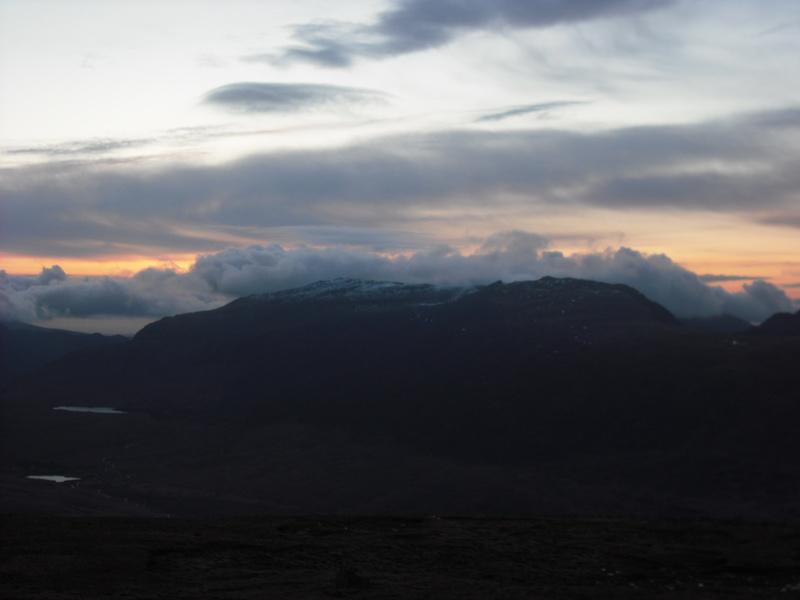 I was keen to get the tent up quickly and chose to pitch on the slightly sloping grass platform on the South East side of the summit, where I had pitched with my daughter. Unfortunately, I pitched a little too far up the slope and wasn't able to get a good taut pitch, as the ground wasn't level enough. As it was very cold I didn't want to take the tent down and move it, so I decided it would do. I chucked all my gear into the tent and began to make tea. On overnighters I alternate between eating Bewell Hot Cereal Start and Porridge with Sultanas. Since it's only an evening meal and a breakfast it doesn't get too boring. Although dehydrated food has come a long way since my 1976 trip to Scandanavia, the only varieties I really enjoy are the porridge and Hot Cereal Start. Stupidly I had forgotten my pot cosy, so has to add a little extra hot water just before eating my meal, as it had cooled down quite a bit. 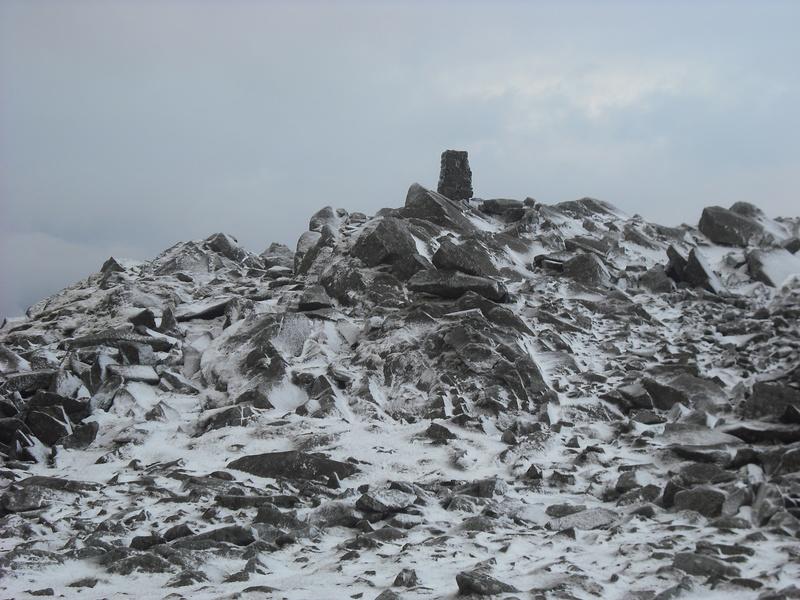 It was now almost sunset, so I had a walk around the summit and took some photos. The wind was very cold and I was only just warm enough with all the layers I had brought with me. I dived back into the tent, where my thermometer showed it was only 2.5C. The angle of the slope was just enough for me to slide down my Exped UL Synmat. Eventually, stuck a load of gear at the end of the tent and wedged my feet against it to stop me sliding. It brought back memories of a bivouac near to the summit of the Matterhorn many years ago. There are lots of ledges on the Matterhorn, but most of them slope outwards. During the night I kept sliding down the ledge and ending up being brought up sharp by the rope. At least this time I was warm. On the Matterhorn I had no sleeping bag and the night was spent shivering violently until that warmed me up and slithering down the ledge.

Clouds Blowing in From the West 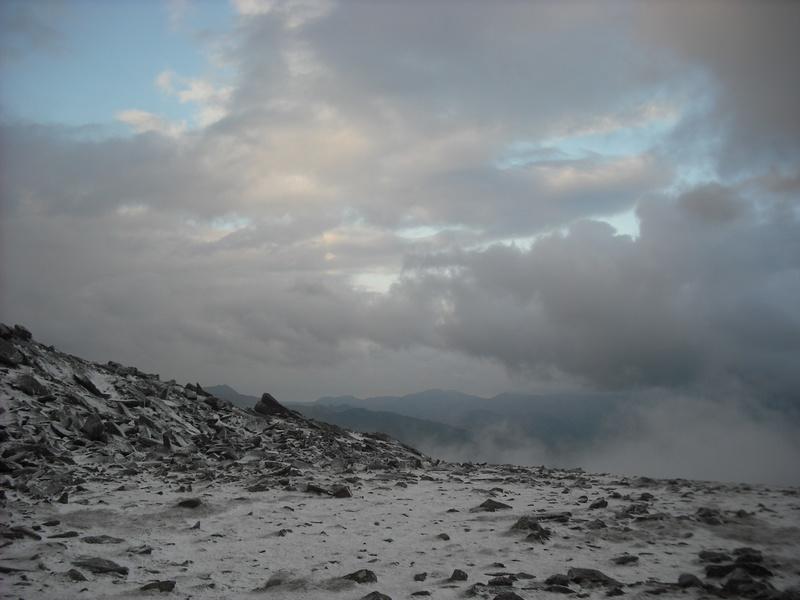 Looking out of my tent at first light the ground was white over. At first it appeared as though the summit was misted out, but it was only a very thin layer and it soon dispersed to give excellent views. I had a feeling that the good weather might not last, so after a quick breakfast began to pack away. I was just taking the tent down when a brief snow storm blew in, to make the job more difficult. It soon cleared and I began to make my way back down towards the Eastern ridge. I traversed below the rocky crest, wanting to avoid the ice glazed rock while carrying a relatively heavy sack. 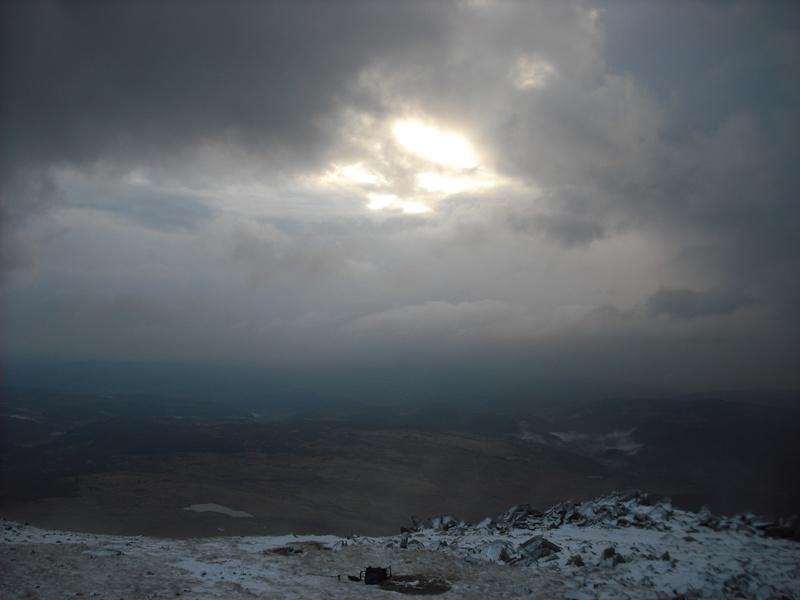 I was soon making my way down the series of depressions in the North East ridge, which lead back to the farm track. Part of the way down the track, I met a group of young people trudging up hill bent under the weight of huge rucksacks.

Looking Towards the Farm Track from the Descent 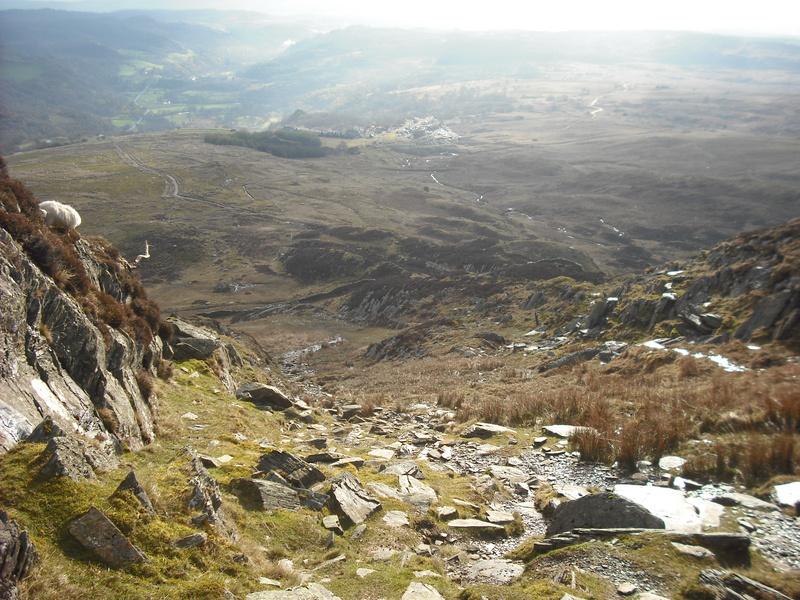 Arriving back at the car I drove over to Llanberis for the traditional cholesterol overload at Pete's Eats. When I emerged from the cafe, I could see that I had been right about the weather and all the summits were again misted out and it was drizzling steadily. It had been a great trip and I was very lucky to get a short window of good weather in the current dreary conditions. 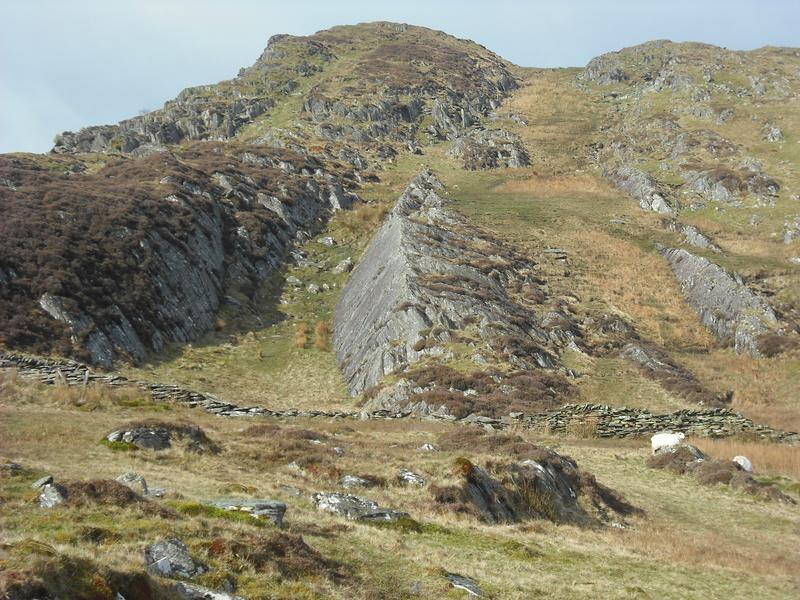