I had wanted to do an overnight trip to North Wales for some time. I am not keen on camping in the Winter months, as there is so little daylight and I don't really want to spend 12-14hrs in the tent. However, it's now light until about 7:00pm and sunrise is around 6:00am. This spring has seen an unusually cold spell of weather with the tops returning to true winter conditions, as temperature remained below freezing for many days.

Moel Siabod from the Farm Track 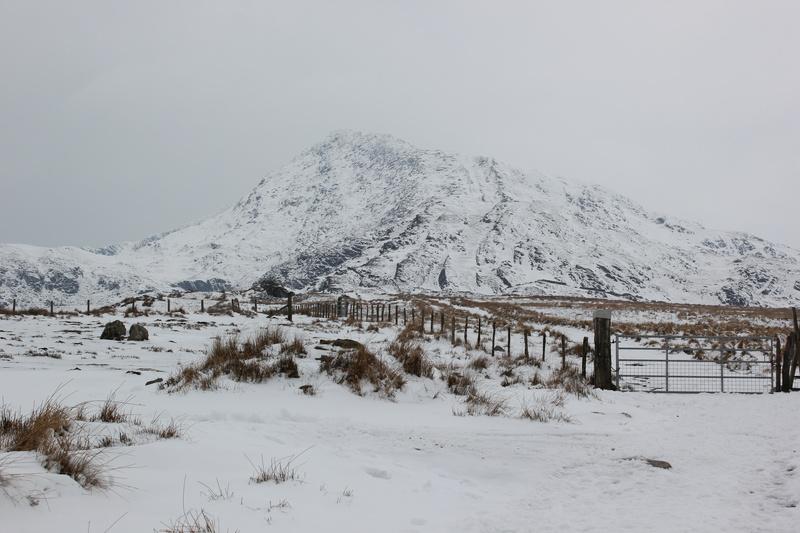 I decided on a trip up Moel Siabod because I wanted to use our new DSLR to take some night time photos and do a series of time lapse sunset and sunrise pictures. The weather forecast seemed good with predictions of clouds above the summits, but temperatures around -6C at 800m.

I dropped my son off in Chester and continued round the A55 to Llanberis. Since my mountaineering boots have worn out and I only have crampons suitable for B3 boots, I needed to get something suitable for my Meindl walking boots. Rather than buy another pair of crampons I decided to get some Kahtoola Microspikes . These were duly purchased from V12 and after a quick sausage sandwich in Pete's Eats I set off for Capel Curig.

Final section up to the summit 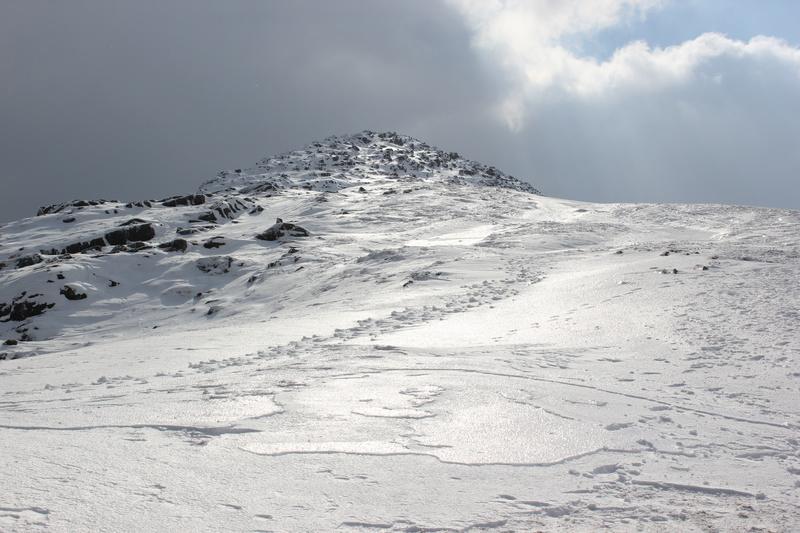 There was a sign and barriers at the bottom of the Pass saying the road was closed. However, it looked fine to me and there as traffic coming down. The road was clear but either side of the top of the pass there were diggers clearing old drifts. I just followed the gritter and had no problem getting through.

Parking near the North London Club hut I began to sort out my rucksack. I had quite a bit of extra gear, including an ice axe the DSLR, a tripod and an extra lens. Luckily, everything just fitted into my POD black ice. It was above freezing in the car park, but once I walked up the track to the farm it was back below freezing. I had hoped to collect water from one of the lakes or a stream, but everything was frozen solid.

Looking towards the Moelwyns 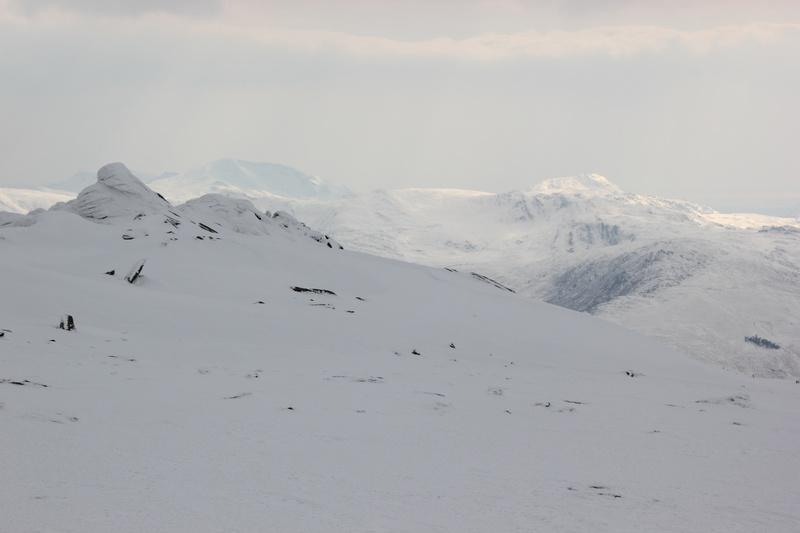 Rather than climb the Ddear Ddu ridge, I had decided to climb the steep slope at the end of the farm track, which is my normal descent route. This has a couple of steep sections up onto the main ridge. I stopped half way up the first of the steep sections to put on the Microspikes. These turned out to be an excellent buy and coped with varied conditions I encountered including iron hard neve and water ice. After what seemed to be a long pull, I reached the ladder styles at the start of the summit ridge. There was a very cold wind blowing from the East, but the effort of dragging a heavy sack uphill had kept me warm. The easterly wind had deposited loads of snow in the lee of the ridge. There was a hard crust on top, but I broke through every few steps, which made for very slow going. I crabbed my way round the summit ridge until the summit trig point came into view. Just below the summit, I spoke to a few people who were descending and when I got to the trig point there was someone in a bothy bag next to it. I moved over to the stone shelter, which was slightly less exposed to the wind and ate some cake.

Looking back along the summit ridge 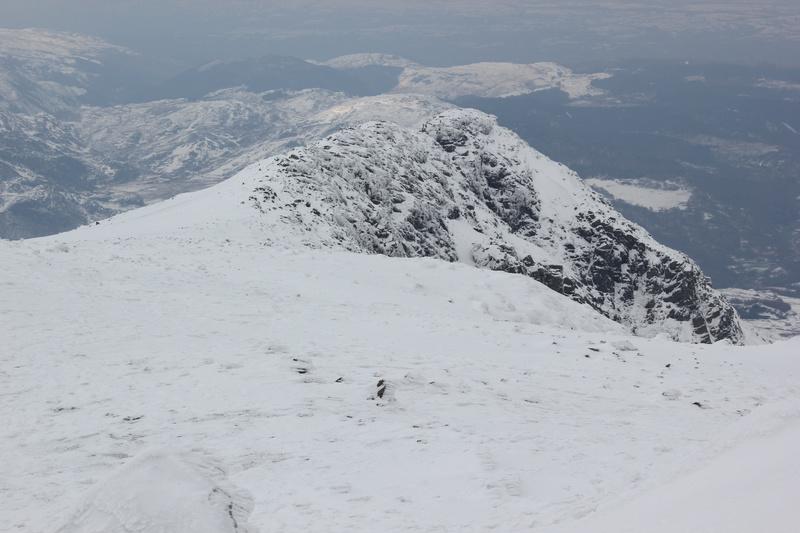 I had a quick look at my flat camping spot overlooking just t the north west of the summmit. The snow wasn't too deep there, but there was quite a bit of spindrift blowing about. Since I didn't have any water, I would have to melt snow and the nearest convenient big drifts would be some way from the tent. I hadn't felt too well on the ascent. Although the cloud was well above the summits there was no sunshine, which made for very flat contrast and there wouldn't any opportunity to photograph the stars. As it was only about 3:30pm I would have plenty of time to descend if I wanted to.

Sheltering in a bothy bag on the summit 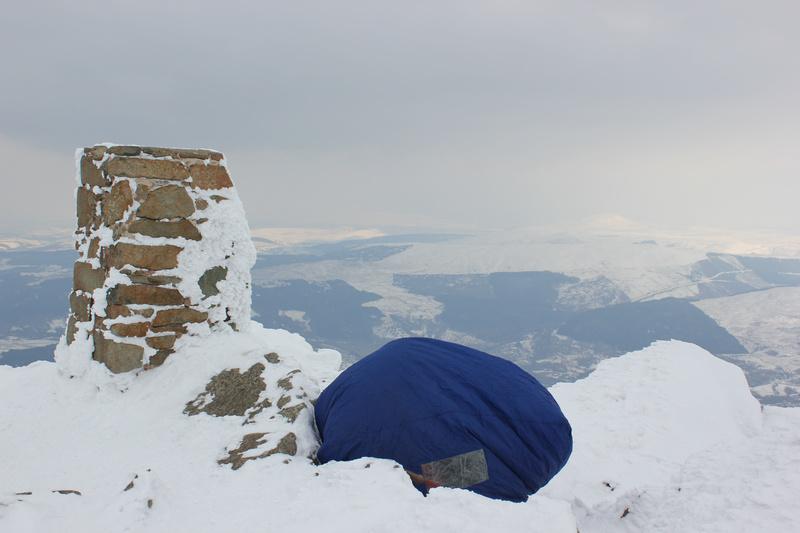 After considering the options for a while, I made the decision to descend and began to retrace my tracks. Almost immediately I experienced a pain in my right hip, which was both sharp and nagging. Although I had fallen over a couple of times and my legs were suffering from the effects of keeping breaking through the crust, I couldn't recall anything specific that would cause the pain. As I ploughed on downwards I had to take frequent rests. The microspikes worked brilliantly on the steep descent and at no time did I feel insecure. I had another long rest when I reached the farm track and at increasingly frequent intervals on the way down. Finally I reached the car, where I made myself a hot drink.

The hip didn't hurt if I was stationary, but only when I walked. After a two hour drive home, I could barely hobble into the house. Luckily after a nights rest it seems to have improved, so I think it's probably just muscular.