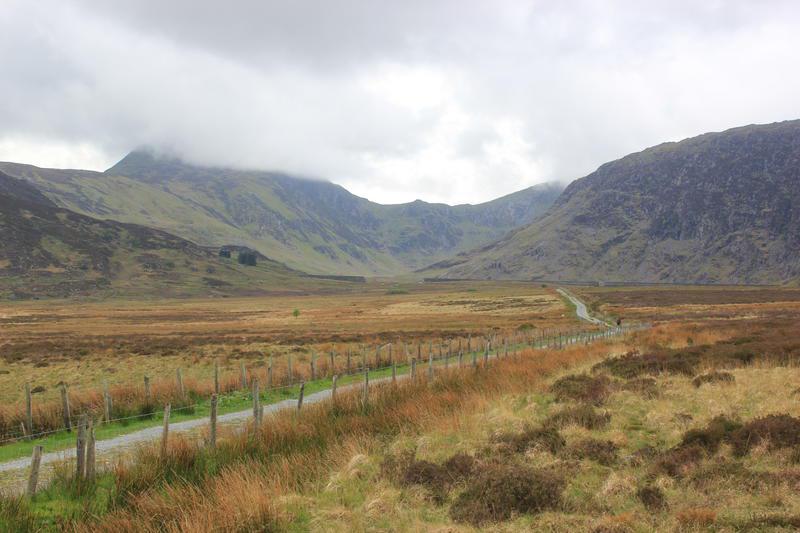 I had wanted to get out backpacking all year, but my free time had always coincided with periods of poor weather. Finally I could get out for a couple of days and the forecast was good. The plan was to drive into Cwm Eigiau and do a two day traverse. I had done a similar route a couple of years ago, but wanted to do a similar route in reverse starting at Pen Llithrig y Wrach and going clockwise around the ridge.

Last year various bits of the road into Cwm Egiau were widened and new passing places installed and the road was closed for several months. Before these improvements there were only a very limited number of places where passing was possible, so meeting a mini bus coming in the opposite direction usually involved a fair bit of reversing. This wasn't much fun as there are several hair pin bends and some 20% gradients. As luck would have it, I met a large mini bus coming down just next to the first gate. I had to bump up onto the grass pull in next to the gate to let it past. At the second gate I passed someone walking up the road and he kindly to closed the gate for me.

Llyn Eigiau appears from the mist 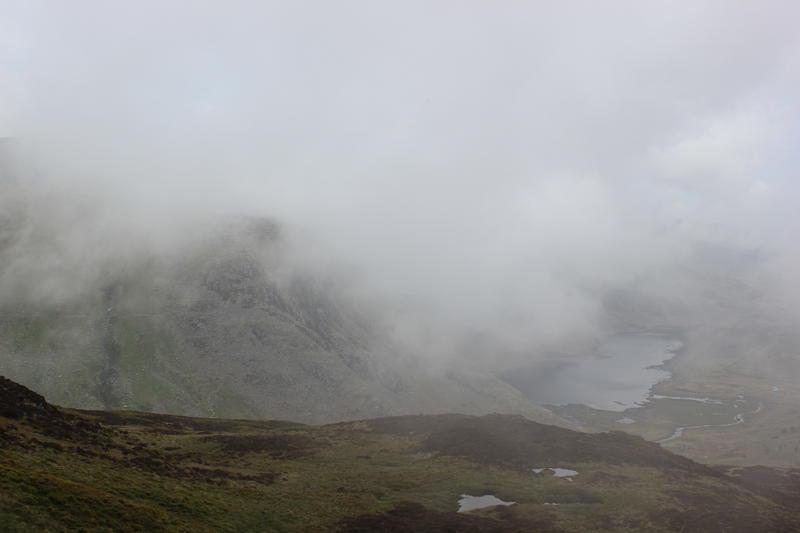 The weather forecast was for early morning mist over the summits to clear by midday. However, at 10:30am the summits were all misted out and I wondered if I had made the right choice in coming up into Cwm Eigiau.

There were only a couple of cars parked in the car park. While I was getting ready the man who had opened the gate stopped to chat with me. He was originally from Dolgarrog, but was now living in Manchester. He had camped further down the road and was going to walk over to Llyn Colwyd before going back to Dolgarrog. 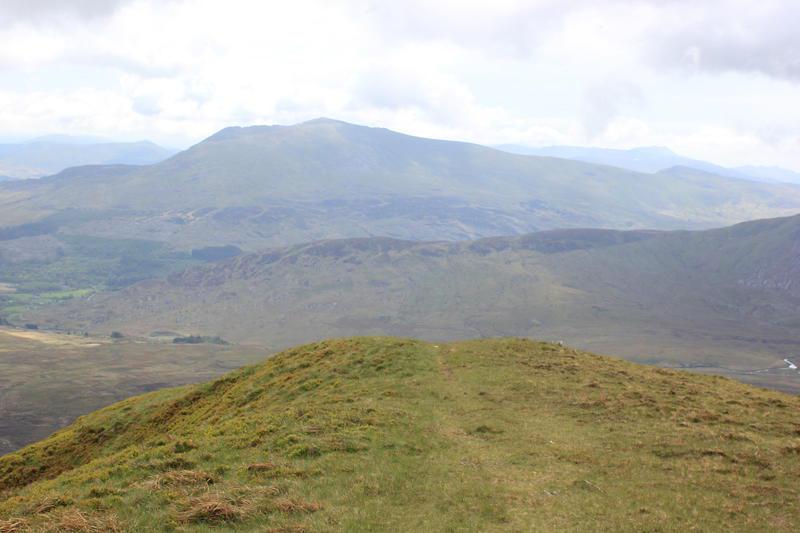 I bumped into him again when I went up to the reservoir to fill my water bottles. He asked if he could walk with me up towards Pen Llithrig yr Wrach. We set off along a track that leads up to an old quarry on the slopes of Pen Llithrig yr Wrach. I hadn't been this way before and there are some impressive holes in the ground, which I presume are old mine entrances. Part of the way along the track I realised that I had left my stove in the car. My walking companion very kindly offered to let me borrow his, but I said that I would manage OK. When we got to the ridge he turned off to descend towards Llyn Colwyd. I plodded on up the summit of Pen y Llithrig y Wrach, which was still covered in mist. Luckily the mist cleared just as I reached the summit and I was able to enjoy good views while I sat and ate my sandwich and chocolate brownie. 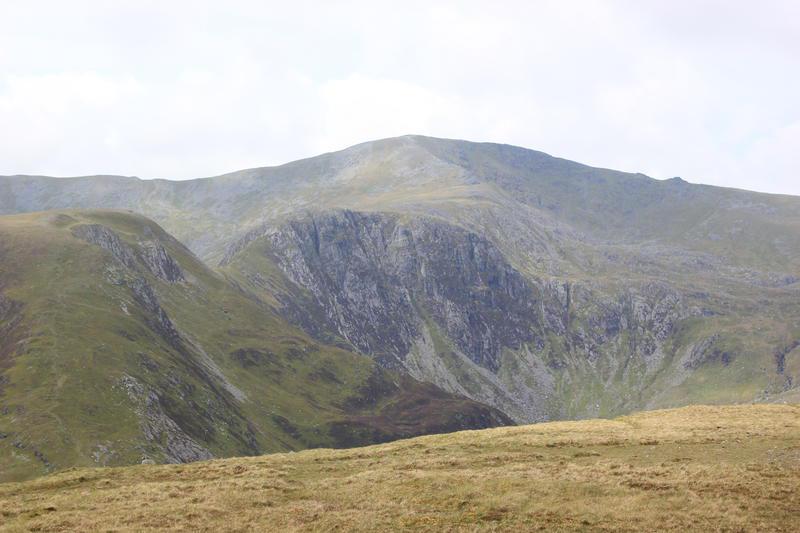 I still hadn't decided what to do about the missing stove. All my camping food was dehydrated, so without hot water I wasn't going to be able to eat until I got back to the car. I had my Travel Tap, so I could top up my water supplies from the various pools of water. At first I thought I might be able to gather enough old heather roots to make a fire. However, there was very little old heather about and most of it was damp. Eventually, I decided to press on and see how I felt later in the day. The slope up to Pen yr Helgi Du seemed harder than the last time I did it. I stopped a couple of times on the way to the summit. As I descended to Bwlch Eryl Farchog I got cramp in my legs, probably because I wasn't drinking enough water.

I enjoyed the brief scramble up to the summit of Craig yr Ysfa. However, the long ridge leading up to Carnedd Llelwlyn was very slow going . If I had got the stove with me, I would probably camped at the spot Ella and I used in ??? at the foot of the final ridge, even thought it was still early afternoon. In retrospect I should have brought more water and some carbohydrate snacks with me. Eventually I arrived at the summit, which was covered in mist despite being clear a few minutes earlier. Luckily, the mist cleared just long enough for me to take a photo of Moel Siabod.

Tryfan and the Glyders from Pen yr Helgi Du 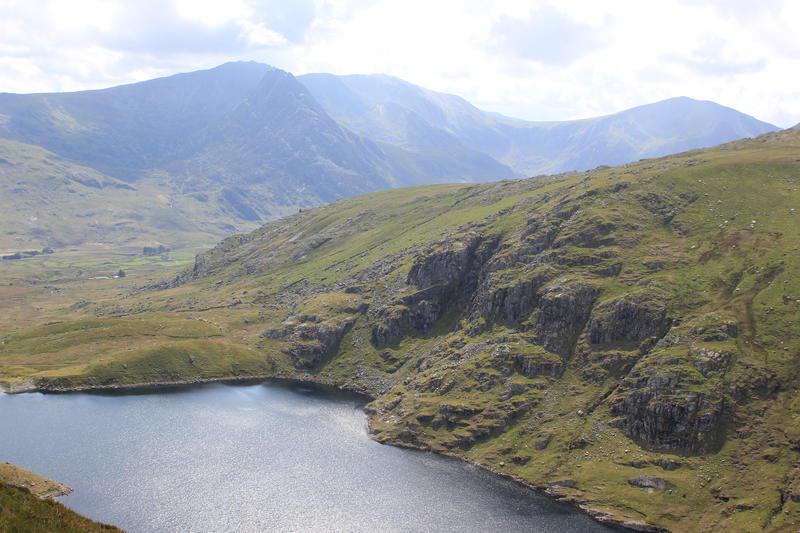 I thought I might camp next to the small pools of water on Gledrffordd. At least I would have water and wouldn't be too far from the car the next morning. I glimpsed the pools through brief clearings in the mist. However, I wasn't at all certain how to get down to them and the detail of that area on my Harveys BMC map didn't really give me any clues. I was pretty certain it was a straightforward slope, but didn't really know where I needed to turn off the main ridge and it there would be any crags that weren't marked on my map. I set off in the direction of Foel Goch, finding the bouldery initial section hard going. I checked the GPS a couple of times to fix my position on the map. It was still very misty and I couldn't see the descent to Gledrffordd. As I lost a bit of height the mist cleared and I could see the path clearly in front of me. I descended from the crest of the ridge towards the path and in the distance I could see the pools of water on Gledrffordd. I didn't feel too bad going downhill, but still got a few attacks of cramp. I didn't have a lot of water left and wanted to conserve it in case I couldn't find a stream. 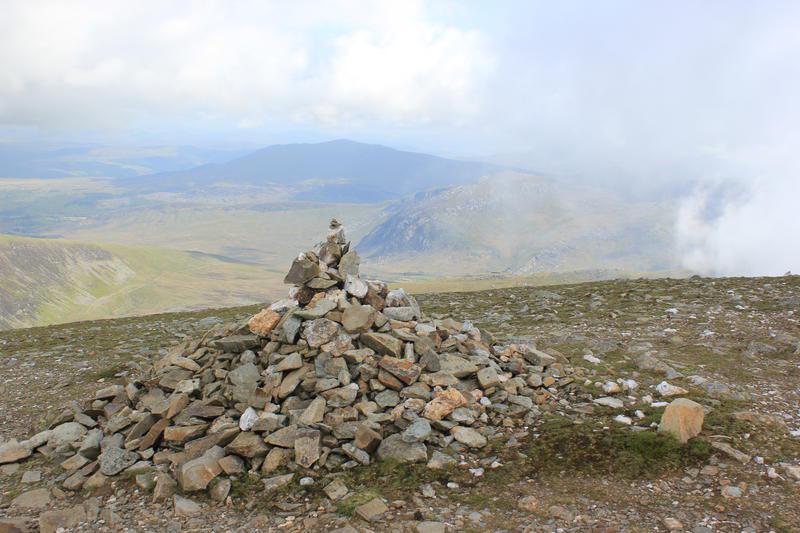 As I made may way towards Gledrffordd, I began to think it might be more sensible to descend all the way back to the car, as I was feeling very hungry. The prospect of lying awake all night thinking I could eat if I continued the relatively short distance back to the car wasn't appealing. It seemed a long way to over the grassy plateau to the pools on Gledrffordd, but eventually I reached the rocky crest at the end. The path disappeared into the rocks and thinking that I was at the end of the ridge , I clambered over the rocky crest and began to descend. I should have checked the map first! 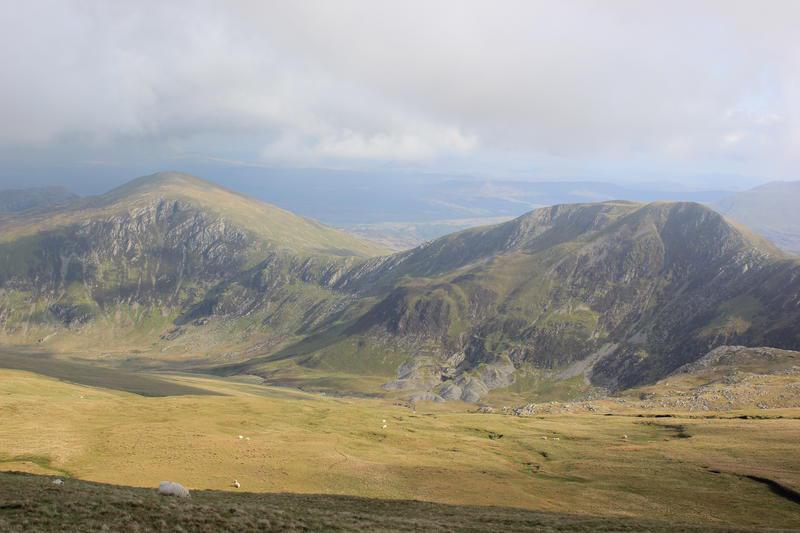 The valley below was obscured by mist, but this cleared after I had descended a couple of hundred feet. I could see that I was on the crags (Craig Eigiau) about half way along Llyn Eigiau. Trying to descend these was not a good idea, as the ground was steep and rocky! Painfully I regained the crest of the ridge and began traversing along the slope below and parallel to it. Finally, the path descended towards a Landrover track. I was very tired and hobbled along the track eventually, rejoining the road next to the car park. All the way down I had passed no streams and only a few muddy pools on Gledrffordd. I would have expected more water after the recent rains. 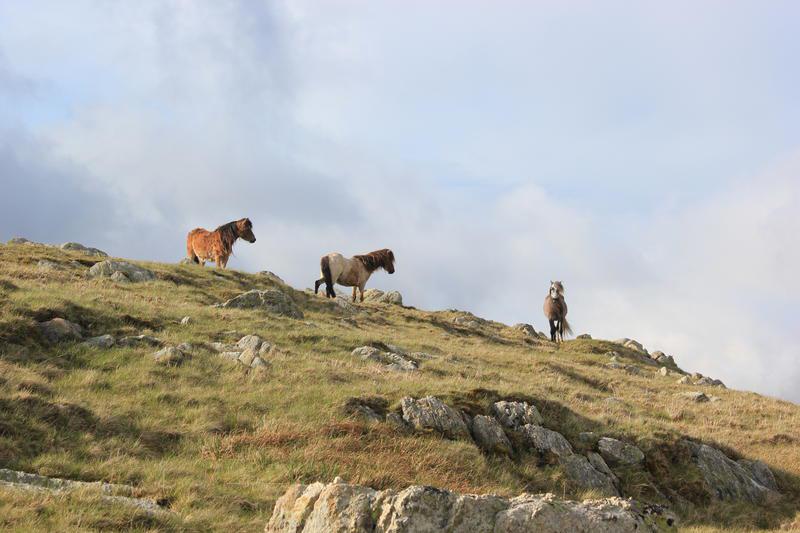 Luckily there was a bottle of water inside the truck, which I drank before retrieving the stove and staggering off towards the reservoir. I did think of camping at Maeneira, which from other people's reports looked an ideal spot. However, it wasn't marked on my Harvey map and I wasn't sure exactly where it was. I went through the smaller of the two gaps in the dam and splashed though a boggy area before finding somewhere drier on slightly raised ground. I chucked down my rucksack and went over to the reservoir to fill my water bottles. There were several Cuckoos calling as I put the tent up. It was well after 10:00pm before I had the tent up and my gear stowed inside. I made a mug of hot chocolate and had a hot cereal start to eat. Finally, before getting into my sleeping bag I drank another cup of hot chocolate.

A short while later it got very light. Looking outside I could see there was a full moon. The mist over the summits from earlier had disappeared and there was a clear starry sky.

Gledrffordd appears out of the mist 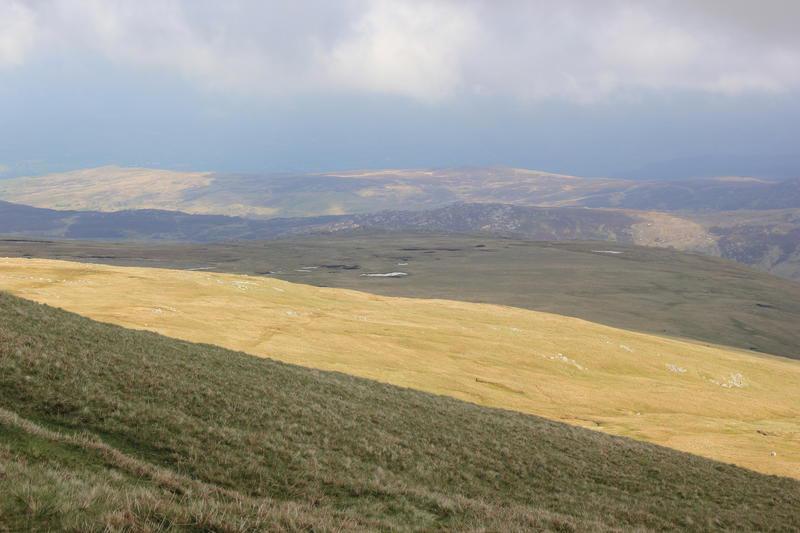 I woke up about 5:30am, with the sun already rising. I crawled out of the tent and put on some water to boil for a cup of hot chocolate and to make some porridge. I was expecting to get cramp in my legs, but apart from feeling very sore they were OK. After eating breakfast I got out the Tyvek sheet from my rucksack and piled all the stuff from the tent on top of it to stop it getting wet. I took my time packing away and enjoyed looking at the scenery. 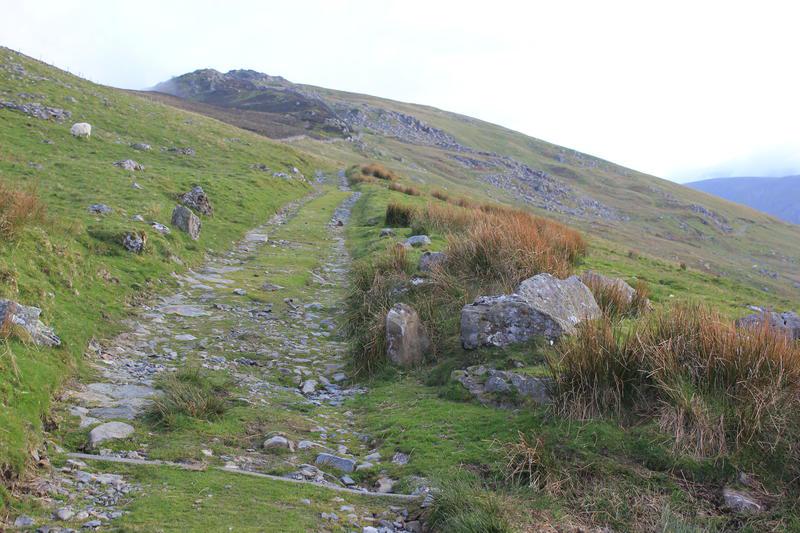 In order to avoid the boggy section, I walked up to the big break in the dam wall before rejoining the Landrover track. It seemed a long way back to the truck and the sun was already getting hot. I was wearing my new Montane insulated trousers which I had brought along for camp use, as my Mammut Base Jumps were wet from yesterday. Once back at the truck I changed into my lightweight Rab Treklites and felt much better. 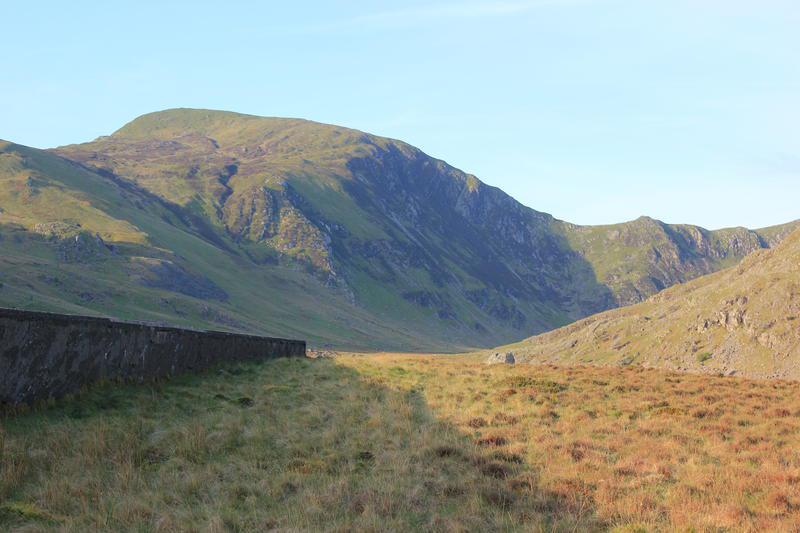 I drove into Caernarfon and joined the A55 driving towards Bangor. I stopped at Y Caban in Deniolen. It was only 8:50am and they didn't open until 9:00am, so I sat on the seats outside, enjoying the sunshine. They were having a veggie week, so my sausage sandwich was vegetarian. I am not a vegetarian, but do enjoy veggie food. However, I was wondering what the sausage would taste like. I needn't have worried as it tasted as good as the meat version. Y Caban is very friendly and serves excellent food, highly recommended. I had a couple of cups of coffee before setting off for Capel Curig.

Packing away the tent below the dam wall 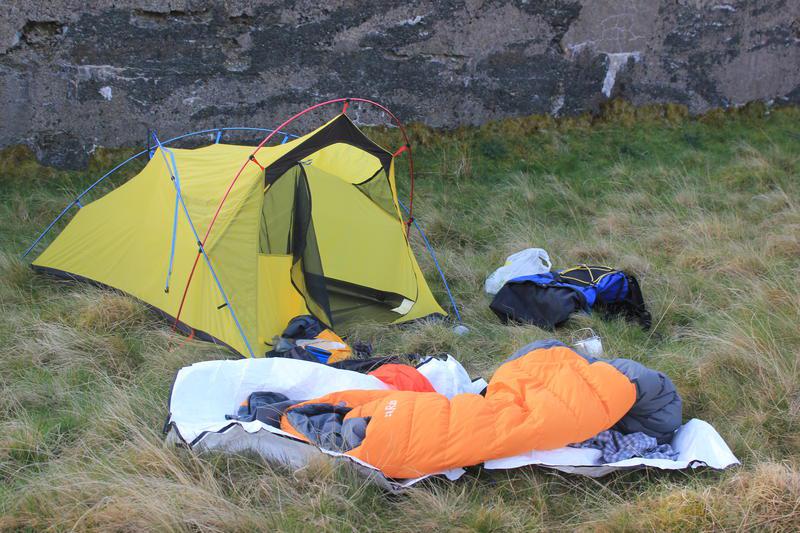 Just outside Joe Browns in Capel Curig I bumped into some old friends from Sheffield and we had a chat. They had been up Cnicht the day before and were thinking of a Carneddau trip today.

Even though I hadn't managed to camp on a summit, it had been a worthwhile trip and I enjoyed camping next to the reservoir. The cloud had persisted longer than forecast, but had cleared often enough to give me good views. Next time I'll double check to make sure I haven't left my stove in the truck!