The Arenigs from the col below Glasgwm 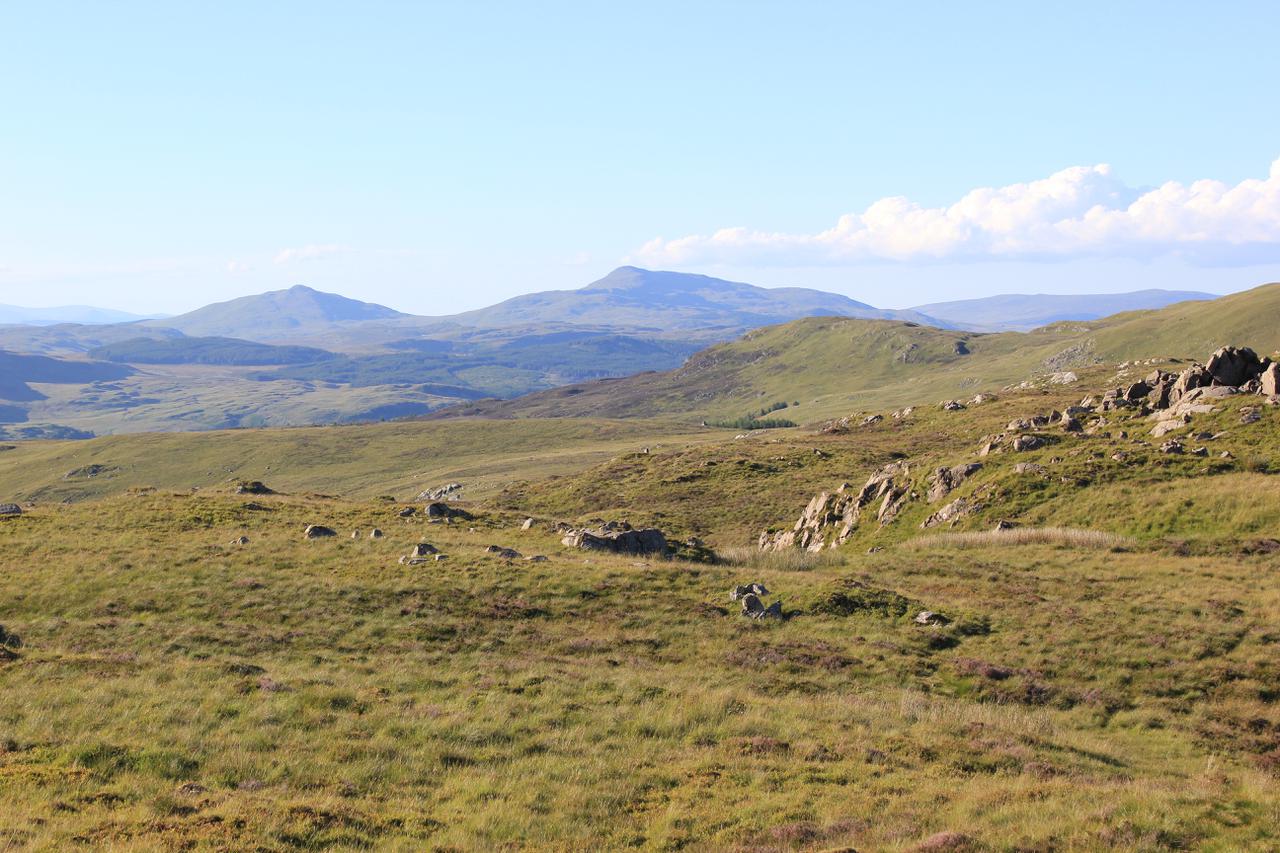 I was going to visit a relative in Swansea and thought I could combine the journey with an overnighter on Glasgwm.

I had forgotten what a long haul it is from home to Dinas Mawddwy. I got to the small car park at the end of Cwm Cywarch about 5:30pm. Although the car park was nowhere near full, there were more cars than I had seen on my previous visits. Various people were returning from their day out and getting ready to depart for home. The weather forecast was for a clear night, so I wanted to try some astrophotography from the summit. A couple of years ago I bought a Yongnuo MC-36B intervalometer for my Canon DSLR. I have used it at home to create time lapse photos and take astro pictures. I have an Velbon tripod that belonged to my father, which I intended to lug up to the summit. I finished packing my rucksack and strapped the tripod to the outside.

I set off along the track and ended up outside the Bryn Hafod hut. There were a couple of people sitting outside and I asked if the track behind the hut continued up to the col above. They didn't know and I don't remember passing the hut on my previous visits, so I guessed I had missed the start of the path. I continued along a feint path behind the hut for some way until it became obvious that I was way off route. I returned back to the track where the the style I should have climbed over was now obvious!

It was very hot with hardly a cloud in the sky. Luckily after a few hundred feet most of the steep section of the route was in shade. I plodded up the path towards the col. Some way below it I came out of the shade. The sun was now low in the sky and shining almost directly in my face. Even wearing sun glasses it was difficult to see where I was going. I finally emerged at the col below Glasgwm drenched with sweat.

The way to the summit was straightforward, albeit a bit of a slog. It was just a matter of following the fence which leads to within a few yards of the summit cairn. There were fine views to the West with very little heat haze. I could see the summit of Arenig Fawr, where I had been a couple of weeks ago, although Moel Llyfnant, where I had camped was hidden from sight. A final steep rise bought the summit cairn into view. Llyn Bach just below the summit was almost dry. I continued past the summit and climbed the stile at the end of Llyn y Fign. The llyn is in a magnificient position with good views in almost every direction. Even better for summit campers there was no need to carry up a heavy load of water. I made my way to the flat grassy area just to the north of the lake, where I had camped previously. There was a pleasant westerly breeze which soon evaporated all the sweat. 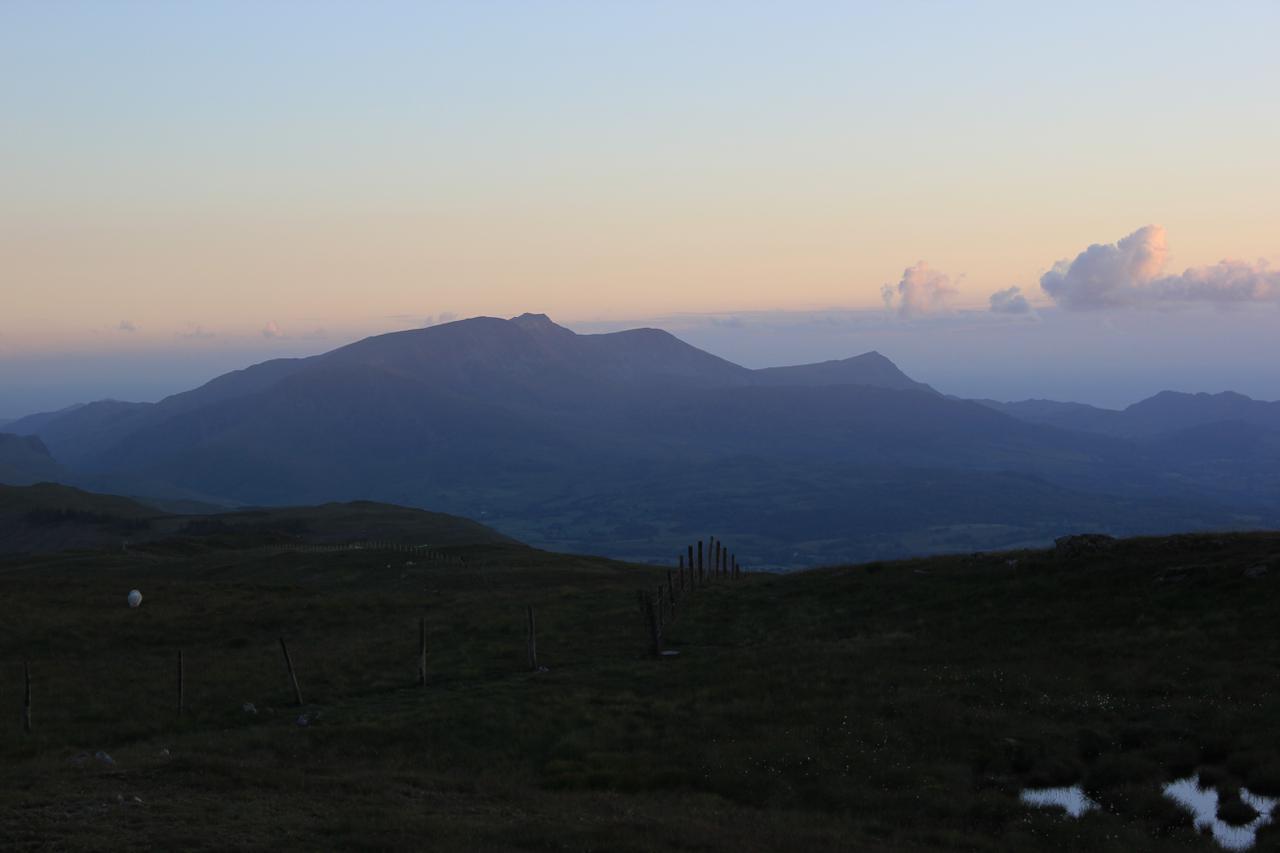 I soon had the tent pitched and there was still a couple of hours until sunset at around 8:45pm, I made a cup of hot chocolate and had some porridge and raisins. When I had finished eating, I grabbed the camera and began walking around the summit plateau. Looking towards Cader I could see it would be possible to take a high level route and continue over its summit to Dolgelleau. A future backpack. Over to the South West I could see the wind turbines on ???. As the sun sank towards the horizon a layer of cloud formed, so I didn't get the spectacular sunset that I saw last time. The top of Aran Fawddwy glowed pink as did the summit cairn of Glasgwm, as the sun sank below the clouds. 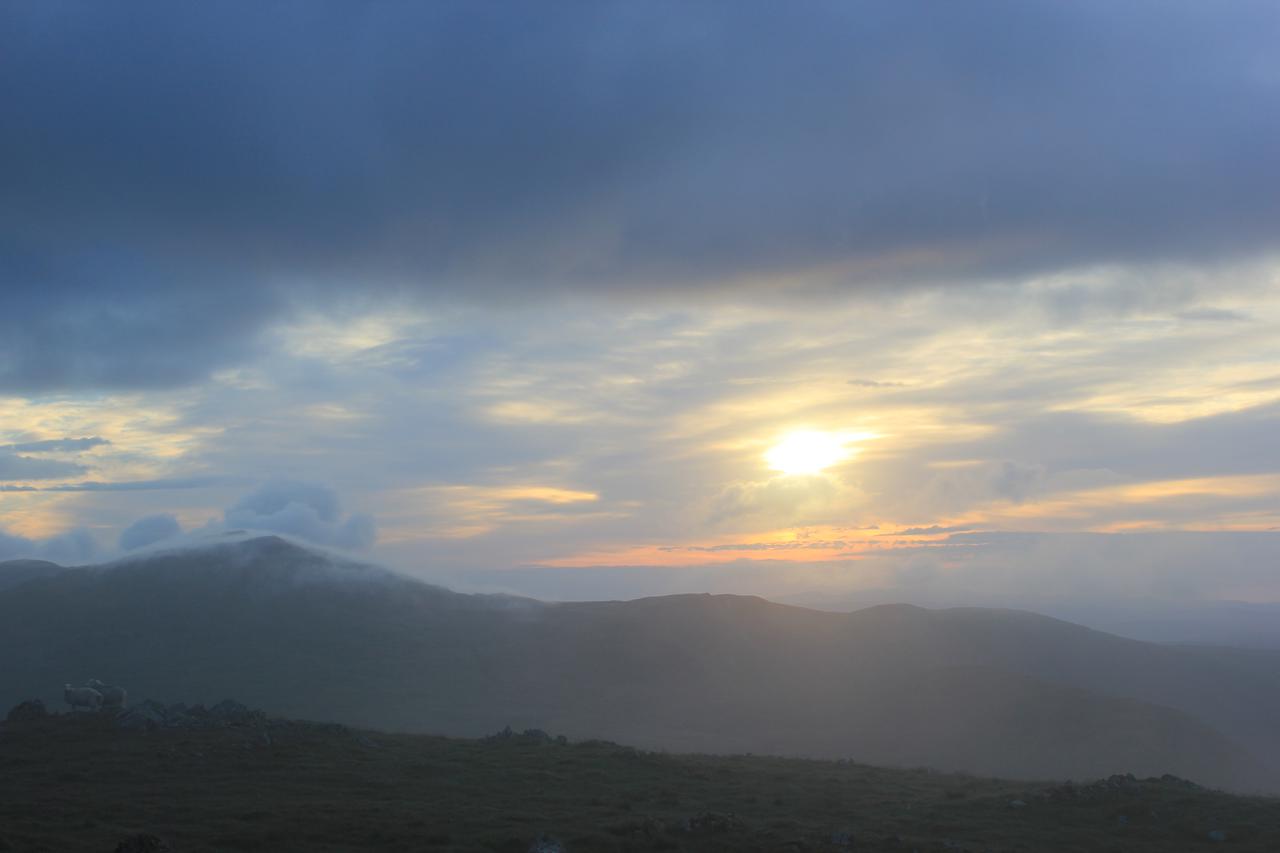 At this time of year it takes a long time for it to get really dark after the sun has set, so I got into my sleeping bag for a couple of hours to wait for the stars to appear. I woke up about 12:30am to see a clear sky outside. The stars of the plough were clearly visible over the top of my tent. I put the camera on the tripod and started taking some photographs. However, my attempt was thwarted by condensation forming on the lens. Not even leaving the camera for outside some time to adjust to the temperature outside the tent made any difference. Eventually I called it a night and went back to my sleeping bag. I woke again at 5:30am and made breakfast - porridge again! I got out of the tent and began to take photographs. However, soon a layer of early morning cloud obscured the summit. I packed up and began the descent back to the car. I dropped out of the mist some way above the col, but most of the surrounding summits were misted out. I had badly bruised my left big toe on my Carneddau trip a few weeks ago, so the descent was quite slow. Although th toe had stopped hurting, the nail had turned black and I didn't want to aggravate the injury.

Back at the car park a couple of cars had arrived and people were departing for their walk. I threw my rucksack into the back of the truck and got ready to resume my journey to Swansea. I drove back along the Cwm following the farmer with his sheep trailer. The road is very narrow with few passing places, so it was good to have an oncoming traffic detector in front of me!

The Arenigs from the col below Glasgwm

I drove back along the Cwm following the farmer with his sheep trailer. The road is very narrow with few passing places, so it was good to have an oncoming traffic detector in front of me.

Back at the car park a couple of cars had arrived and people were departing for their walk. I threw my rucksack into the back of the truck and got ready to resume my journey to Swansea. I drove back along the Cwm following the farmer with his sheep trailer. The road is very narrow with few passing places, so it was good to have an oncoming traffic detector in front of me!