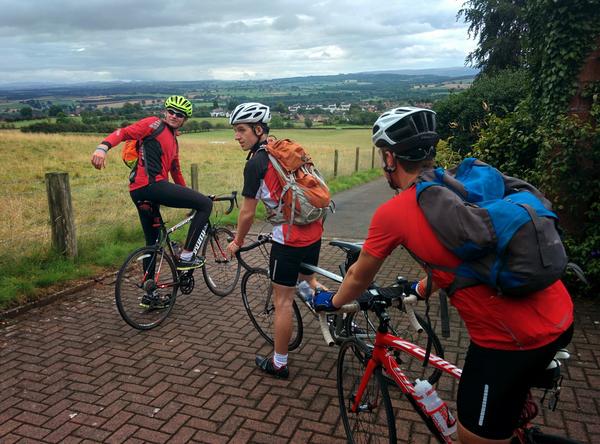 We had originally planned this section to complete the major climbs of the middle section in one day. It turned out to be a very short day, about three and a half hours (excluding tops). In retrospect it would have been better to continue beyond Allenheads, but as we had pre-booked accomodation this wasn't possible. With a bit more planning we could have probably completed the route in two days, although for me, this would have been pushing it a bit.

We had arranged to meet my son and his friends at the place they were staying in Penrith about 8:30am. We had planned to have breakfast at the Little Chef, but although the pillar on the outside said it would open at 7:00am, it turned out that it wouldn't in fact open until 8:00am. Somewhat fed up, I decided to cycle down into Penrith and have breakfast at Morrisons. After breakfast, I cycled up the steep hill to the house where my son was staying. The house was actually on the C2C, which made initial route finding straightforward.

My son and his friends raced off in front while my brother in law and myself followed at a more sedate pace. Once again the weather looked decidedly dodgy, with cloud obscuring the moors in front of us. We passed through Langwathby . There followed several sections of up and down, but nothing too steep. We could see cars climbing the A686, high up on the moors, in the distance. The tops were covered in cloud, so we couldn't see that cafe.

Looking back from Hartside cafe 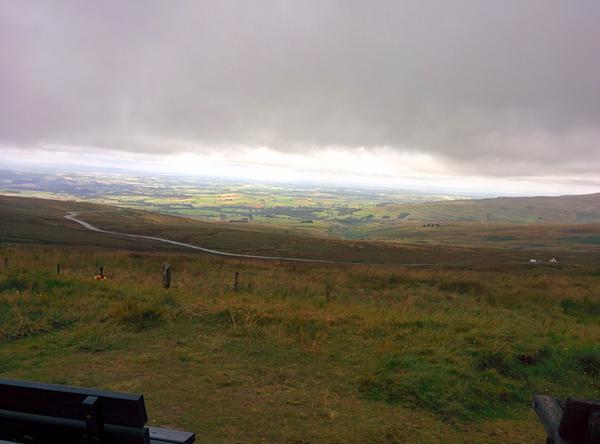 From the description I had expected the hill up to Hartside to be challenging. However, it turned out to be much easier than many of the other lesser hills. It's long, but apart from a very short section, where the route joins the main A686, it's not particularly steep. I managed to maintain a respectable pace and only stopped to take photos. I arrived at the cafe just as the cloud lifted. I couldn't have timed it better. The cafe wasn't too busy and a couple of cups of tea with an apricot slice were very welcome.

The descent from the cafe was very pleasant. Although it's on an A road, there was very little traffic. Not having seen any traffic for the last three miles, as soon as I wanted to turn right at Leadgate a veritable convoy suddenly appeared behind me. The ride down into Garigill was pleasant. However, the initial section out of there was a shocker. After overcoming the very steep start, the hill goes on, and on, and on. However, the subsequent sections aren't too steep and there are fine views all around. We stopped for a drink and some food at the top of the hill before beginning the descent towards Nenthead. Just before arriving at Nenthead there is a very steep descent. This culminates in a couple of very sharp bends and the road is very potholed. There are several signs warning you to slow down. Take note! Going too fast will result in a painful crash.

My wife was waiting at Nenthead and we stopped for a chat and some more to drink. After an initial steep climb out of the village we turned off along the B road to climb up to the top of Black Hill, the highest point of the C2C. There follows a short descent before another small hill. After that it's a great downhill ride all the way to Allenheads.

View from above Nenthead 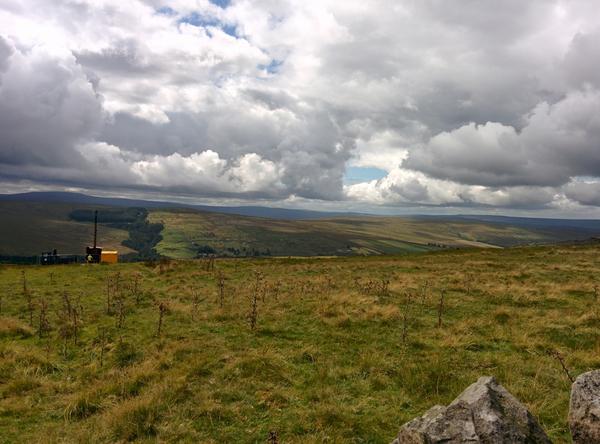 The village of Allenheads is quite stretched out and the pub and our accommodation were at the far end. My son and his friends stayed in the pub, ee stayed at Newhouses, which was a short way out of the village up a track. The proprietor seemed very confused about exactly who she had booked in, despite email confirmations. However, we sorted it out eventually. The accommodation was superb. The rooms were large and comfortable. Downstairs there was a separate residents lounge and kitchen.

After a short rest, we wandered down into the village to join the others at the pub. We had an enjoyable meal and a few drinks before wandering back up the road to our beds.