I left Chestnuts around 8:30am and cycled down into Whitehaven. I cycled down to the harbour, but didn't bother going all the way along to the C2C sign. The initial section out of Whitehaven is fairly grim. The cycling is easy, but the route goes through several housing estates and the path is littered with large collection of dog turds and broken glass. Luckily this section isn't too long and I was soon following the old railway line. The off road sections are almost all on tarmac so fine on a road bike. There was a short section of rather bumpy track just before Rowrah which would be unpleasant on a road bike if it was very wet.

Bassenthwaite from near Cockermouth 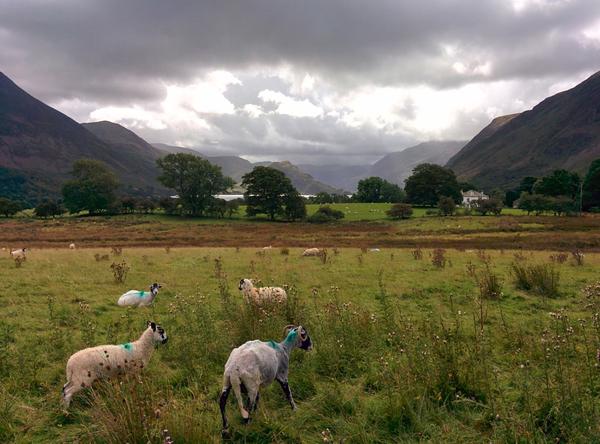 The weather, which had been fine for weeks looked decidedly dodgy. The day before the tail end of a hurricane had passed through. The fells in front were covered in cloud and there was a very strong wind. Luckily the wind was blowing from the west, so was in fact a big help!

There is a stiff climb out of Kirkland, but the extra altitude gives you great views over the surrounding countryside. There is a pleasant downhill section to Lamplugh, with a stiff climb at the end. I was headed towards Loweswater, but the view of the lake is obscured by Burnbank. After a downhill section to Waterend I could finally see the lake. The road follows Loweswater, with some minor ups and downs until you reach the village. I headed towards Brackenthwaite along a narrow road with plenty of ups and downs. At the village of Low Lorton there is a very steep section. Thankfully it's short and it deposits you at the bottom of the Whinlatter Pass. 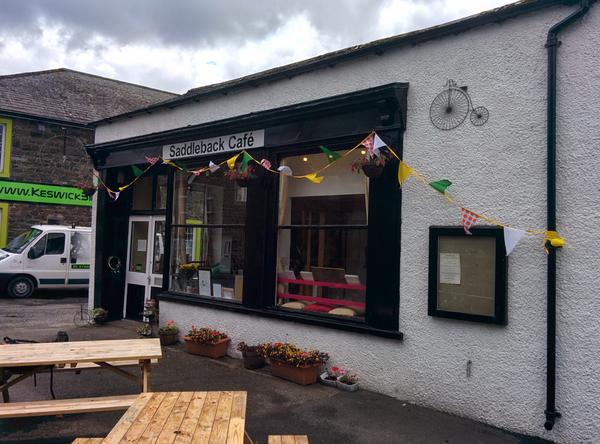 The climb up Whinlatter isn't to bad and there is a Visitor Centre at the top, which I didn't bother visiting. I stopped i one of the car parks to chew through an oat bar and have a drink. I realized how cold and windy it was, as in about five minutes I went from an overheated sweaty lump to a shivering lump! I can't really see the point of following the forestry track, which looks steep and loose. The road is fairly quiet. It is very steep in places, so you need to keep a check on your speed and make sure that you can make it round the next bend, without colliding with an oncoming car. At the bottom I crossed a small suspension bridge over the Derwent. A short section along a railway track emerged next to the A66. There is a good cycle track alongside the road. It was on this track that I experienced the only puncture of the trip. There was an explosive bang and the rear tyre went flat instantly. I couldn't find anything that might have caused this to happen and there was nothing stuck in the tyre. I had soon fitted a new tube and continued the short distance into Keswick.

Keswick reminded me why I don't visit the Lakes anymore. It took about five minutes before there was a break in the traffic, so I could cross the road. The town itself was absolutely ram packed full of people and almost every shop was some sort of outdoors emporium, with almost no real shops. 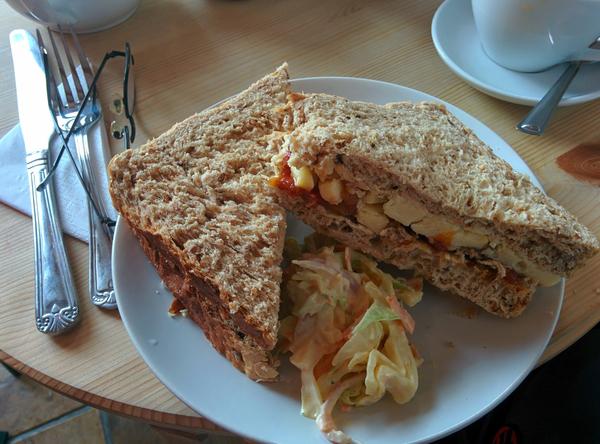 I still had one spare tube, but I bought another at KeswickBikes. While I was there I bought a Cateye rear light, as my son had commandeered mine for his bike. I wasn't expecting to be riding in the dark, but having some sort of highly visible light in case of heavy rain, or poor visibility is always a good idea. I settled into the Saddleback cafe, which is next to Keswick Bikes. I had a "proper" cheese and pickle doorstep wedge sandwich. While I was eating it, the heavens opened and rain poured down. Fortunately, by the time I had finished lunch the rain had blown over.

I made my way slowly through the centre of Keswick, which given the amount of traffic was probably the most dangerous part of the journey. I arrived at the bottom of the steep series of climbs up to Castle Rigg Stone Circle. On one section I was going so slowly that I was overtaken by a runner. Oh the shame and embarrassment! Finally I made it to the stone circle, where I stopped for a rest. A few years ago we had visited them with the children on a ride that went out of Keswick along the old railway track and returned past the stone circle.

I made a mistake shortly after the stone circle and turned left too soon. This brought me out on the A66, with no option of avoiding cycling along it. Fortunately I didn't have to cycle back too far to get on the right route, which brought me out near Threlkeld. Past Scales the road turns north on a narrow lane leading to Mungrisdale. The lane had plenty of gates, so every time I got into a nice rhythm I had to get off to open and close a gate. Although Mungrisdale is a pleasant enough place, it seems as if the C2C deliberately chooses to meander about when a more direct route is possible. I kept seeing signs on the A66 telling me that Penrith was 10 miles away, but I ended up cycling nearer 20! After another long meander through Greystoke (home of Tarzan), it was finally time to drop down into Penrith.

I made straight for Morrisons, where I had a large Bakewell tart and a pot of tea. I received a text from my son, who is a lot fitter than me and had arrived some time before. I was staying in the Travelodge on the A66, where my wife was going to join me. I was a bit worried how I was going to get there, as I really didn't fancy cycling down the A66. Luckily, there is a cycle path that leads alongside the A66 directly to the Travelodge. 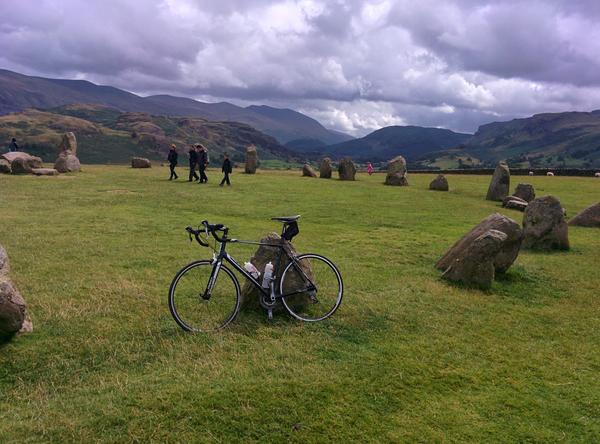 The Travelodge had recently been refurbished and had decent size rooms, pleasantly decorated. Travelodges can be cheap to stay in, but recently seem to have been involved in a race to the bottom to cut facilities and maintenance to the minimum to save costs. However, I would be happy to stay in the Keswick one again! We had tea in the Little Chef next door - I thought these were extinct.

I was happy with my performance on day one. I hadn't found the ride hard and wasn't particularly tired.