Sculpture on the outskirts of Consett 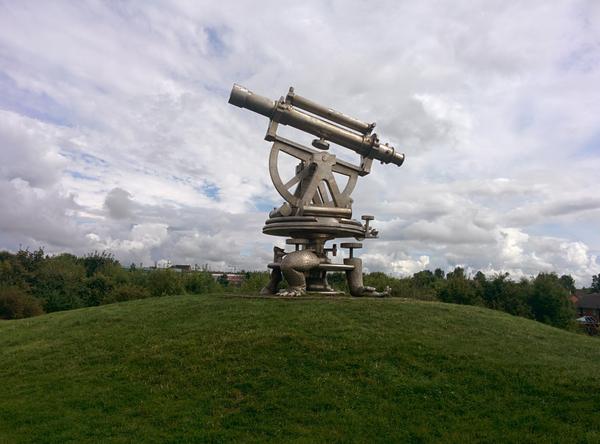 When I got up in the morning, I felt slightly sick and couldn't eat much of the excellent breakfast. Luckily I recovered after a couple of hours on the bike, but was a bit worried about how the day might go. I wanted to get to Newcastle as early as possible, so I would be able to get back to Whitehaven in time to drive home. I was also worried about not being able to get my bike on the train.

Almost as soon as I left the village there was a steep hill. This lead through a series of tight bends and was hemmed in by forestry. Just what you don't need first thing when not feeling too well! However, I made it to the top, where a van was disgorging the beaters for the days grouse shooting. The following downhill section to Rookhope was the most enjoyable descent of the whole trip. It's just the right gradient to coast, with the occasional boost from the pedals.

In Rookhope I ignored the off road section and continued on along the road to Stanhope. The climb out of Stanhope was without question the toughest of the whole C2C. Overall the hill wasn't too bad, but there are two sections of 1 in 3 or 1 in 4 near the start. I managed the first section, but gave up and walked on the second one. Eventually the road reaches the start of the Waskerley Way. I wasn't sure about doing this on a road bike, although my son took this route and said it was fine. I needed to do even more climbing before I reached a small B road that descended parallel to the Waskerley Way. This was a great descent, most of it just coasting along. At the end there was a bit of ascent to rejoin the Waskerley Way.

On the outskirts on Consett I stopped for a breather and the others caught me up. We cycled past the old smelt wagon at Widgetts Junction and missed out turn off to Newcastle. Luckily a local cyclist helped us out with directions and we were soon back on the right route. Most of the rest of the route follows an old railway with a good surface. I just wanted to get to the end, so just put my head down and pushed on. Finally I emerged next to the river and got a bit confused when I seemed to be cycling the wrong way. However, it turned out OK as I needed to reach the A695 road bridge to cross the river. From here the C2C shares the route with the Hadrians Way cycle path.

I could seen some rain blowing up the river towards me and about two miles from the end I was engulfed in a downpour. There was no point in stopping to get out waterproofs, as I was soaked in a few seconds. I ploughed on, stopping only to ask someone in a bus shelter how to get to the station. His directions were spot on, but finding the entrance was problematic. I met up with my brother in law, who was having the same problem! Eventually, we got into the station where a very helpful member of staff told us that there was a train to Carlisle leaving in about 10 minutes. We raced onto the platform, where we discovered that this train had space for six bikes and all the slots were empty, so we had at least got our bikes onto this train OK.

Once I sat down I started to feel very cold. I had no spare clothes, so just dripped and shivered all the way to Carlisle. There was a train to Whitehaven ready to depart. This train does only have two bike spaces, but the guard was fine about me just sitting and holding onto my bike. Finally I was back in Whitehaven in the early afternoon. I went to Tescos for a hot drink and some food before cycling back to Chestnuts to pick up the car. I had a brief chat with the owners before setting off back home. Unfortunately, junction 16 on the M6 was closed at night for repairs. I could have come off at an earlier junction, but there were no signs before junction 16 indicating that it was closed! This added an unnecessary extra 30 miles to my journey.

I spite of the drenching and extra unnecessary 30 miles driving home, I had enjoyed the last day. I would like to do the route again, but next time I'll try and do in two days.