At last the weather was showing signs of improving with good forecasts for today and for the next few days. I took my son to his rowing session in Chester and carried on towards North Wales along the A55.

I had decided to do a route from Cwm Eigiau. I have been walking over the Carneddau for many years, but never started from Cwm Eigiau. I took the windy single track road up from Tal-y-bont, which leads to a small car park in the heart of the Cwm. Luckily the only vehicle I met on the road was the farmer's Landrover at one of the gates. The car park was quite crowded, with several mini-buses and people milling about. I pulled in at the far end next to and old Post Office van, which had been converted into a camper van. By the time I had sorted out my rucsack it was 11:00am. I set off along the path from the car park to the NW leading to Clogwynyren. The plan was to gain the ridge somewhere around Foel Fras and continue towards Foel Grach. 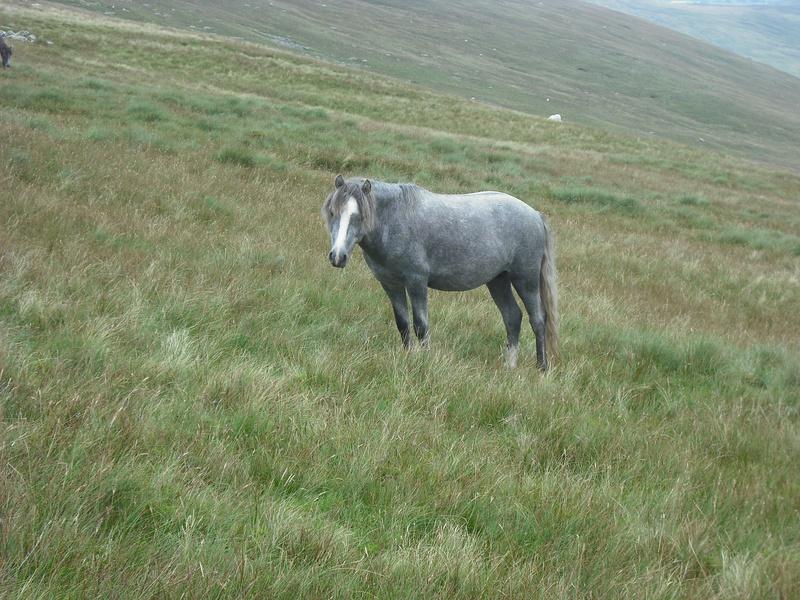 I reached the bridge over Pant y Griafolen and followed the path to where it reached Afon Garreg-wen. The plan was to follow the stream uphill to meet another path shown on the map, which crossed it at about 707677. This path would lead me on the plateau. The slope alternated between boggy sphagnum and steep grass and bilberry. Steep sections were interspersed with short flat shelves. I couldn't see the top of the ridge above me, but I judge how far I had to go by looking over to the rocks on the summit of Foel Fras. The tedium of the ascent was relieved by a couple of wild ponies, who allowed me to approach quite close to them. I never found the path that is shown on the map, but eventually I arrived on the plateau just to the South of Foel Fras. I dumped the sack and did a quick there and back to the summit before continuing on to Carnedd Gwellian, where I stopped for lunch. Ahead of me I could see a cap of cloud over Foel Goch and Carnedd Llewelyn, but it looked as though it was slowly lifting. By the time I had eaten my lunch Foel Grach was clear. 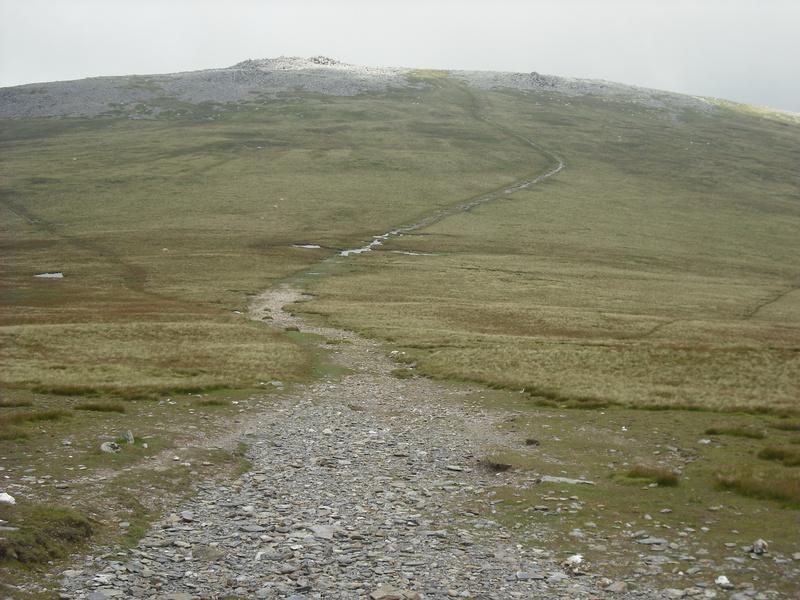 I made my way along the plateau to Foel Grach and paused to have a look round the emergency shelter. The last time I can remember visiting Foel Grach was in September 1982. At that time there was a Visitors Book, which I had signed. I opened the door to the shelter and went inside for a look round. There is no longer a Visitors Book and inside it was quite damp, but tidy with several small benches. Whilst it is probably very useful in an emergency, I can't imagine wanting to stay there otherwise. It's also quite hard to find, being sort of hidden in the slope below the summit. 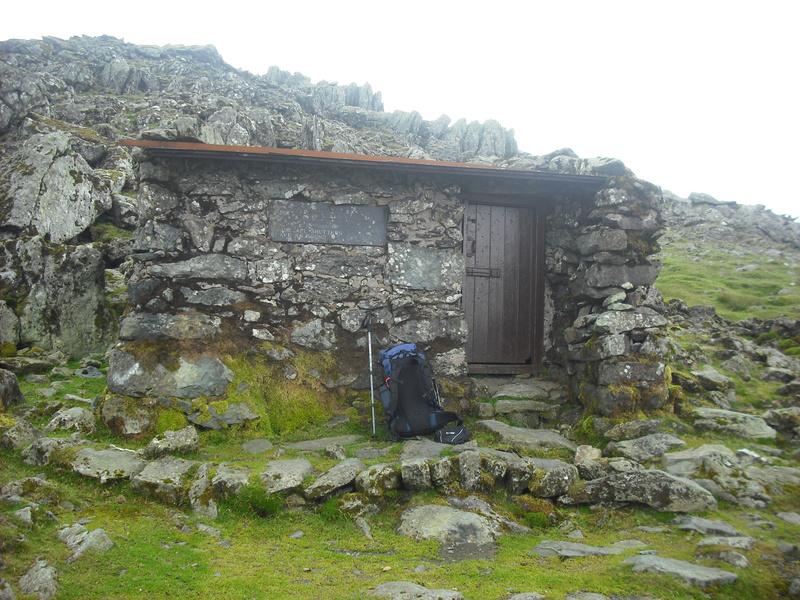 After taking a few photos I continued over to the summit of Carnedd Llewelyn. The top hundred feet or so were misted out. However, as I started dropping down the SE ridge I soon dropped out of the cloud. I paused briefly at a spot, just off the path, where I had camped on a couple of previous trips for a drink and to admire the views. Continuing on over Craig yr Ysfa there were fine views all around. Often at this time of year the atmosphere is hazy, but I could see the Moelwyns and Cader in the distance. I scrambled down the rocky step above Bwlch Erol Farchog and started up the short steep scramble to the summit of Pen yr Helgi Du. Behind me I could see a family group with two children struggling to find a way down the rock section to the col. However, eventually they managed it without incident. 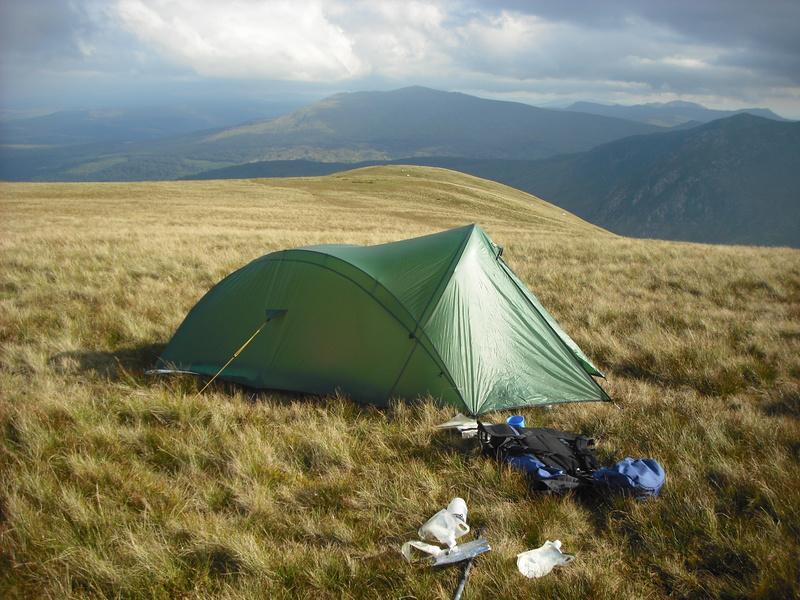 It was now 5:00pm. I had thought about continuing on to camp on Pen Llithrig y Wrach. However, on the scramble up the ridge I had began to get cramp in my legs, a sign that I needed to stop to rehydrate and eat something. Also I think that the summit of Pen yr Helgi Du is a better viewpoint. 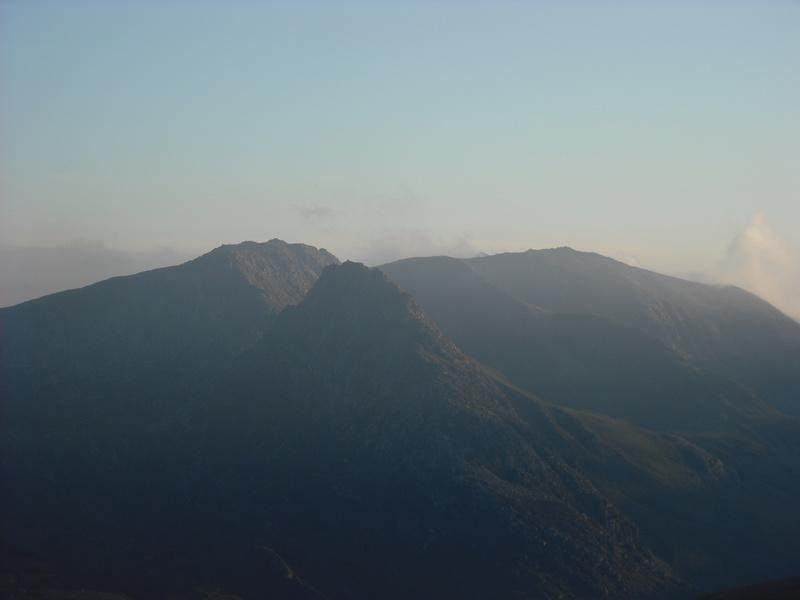 There is no reliable water supply on the Carneddau ridge, so all water must be carried up. I tend to sweat a lot, so had dragged three litres up with me. This is just enough to last me through a hot day with an evening meal and a breakfast the next morning, leaving a small amount to drink on the route back to the car. 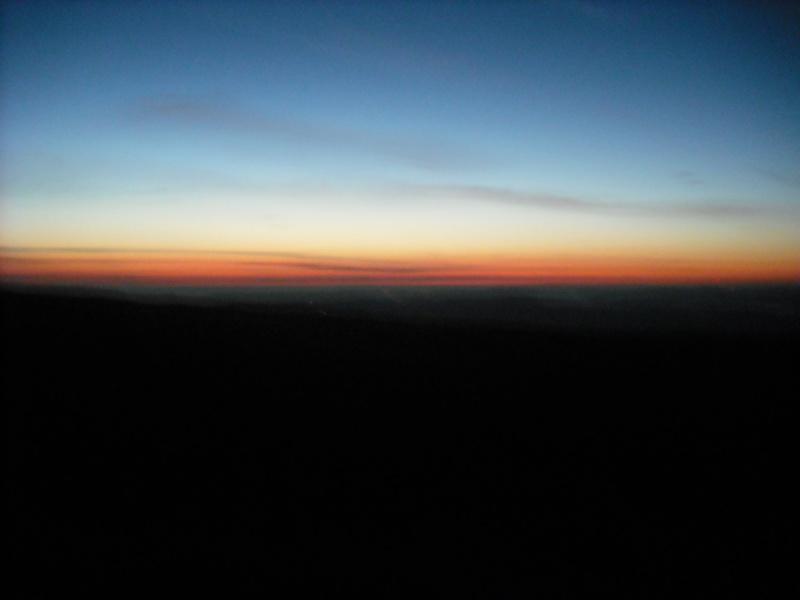 I soon had the tent up and after a drink and some food felt much better. It was a perfect evening. The cloud, which had been covering many summits, cleared leaving perfect views in all directions. The sun disappeared behind Carnedd Llewelyn about 8:00pm. There was a bright moon and the odd shooting star could be seen, perhaps the precursors to the Perseid showers. 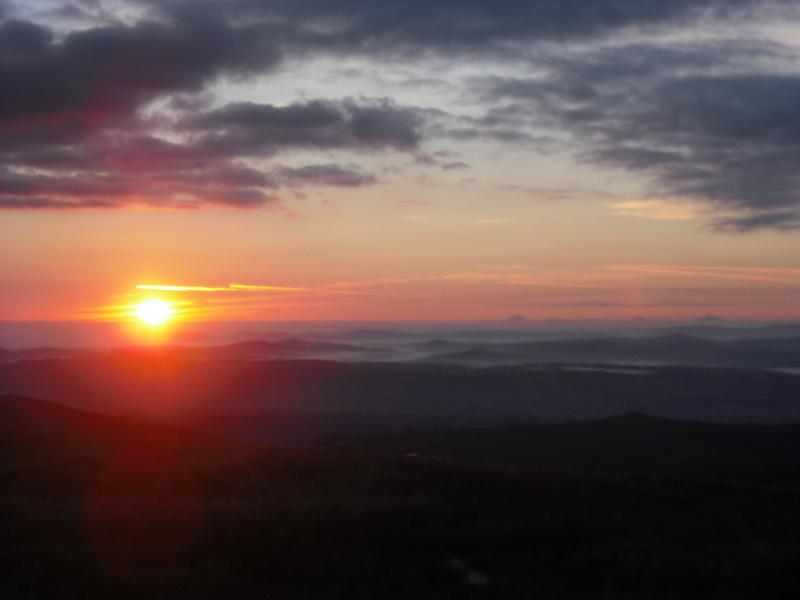 About 4:00am the next morning I had to get out of the tent to answer a call of nature. Although the official sunrise was about 45 minutes away, The horizon to the East had a faint tinge of red. There was no wind and rather than clamber back into my sleeping bag I started to cook breakfast, so I could sit outside and enjoy the sunrise. By 6:00am I had packed up and was ready to start the day, with the sun now well above the horizon. I don't like heat, so wanted to get most of my walking done before it got too hot. 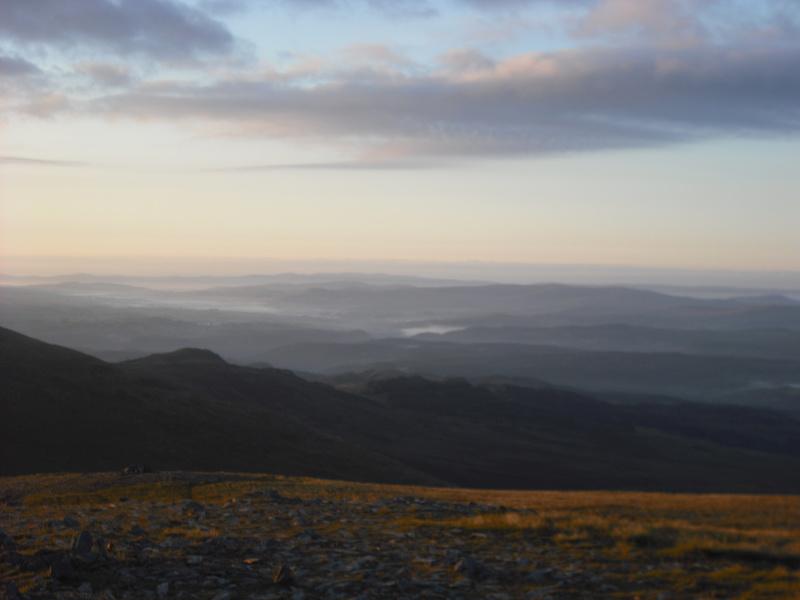 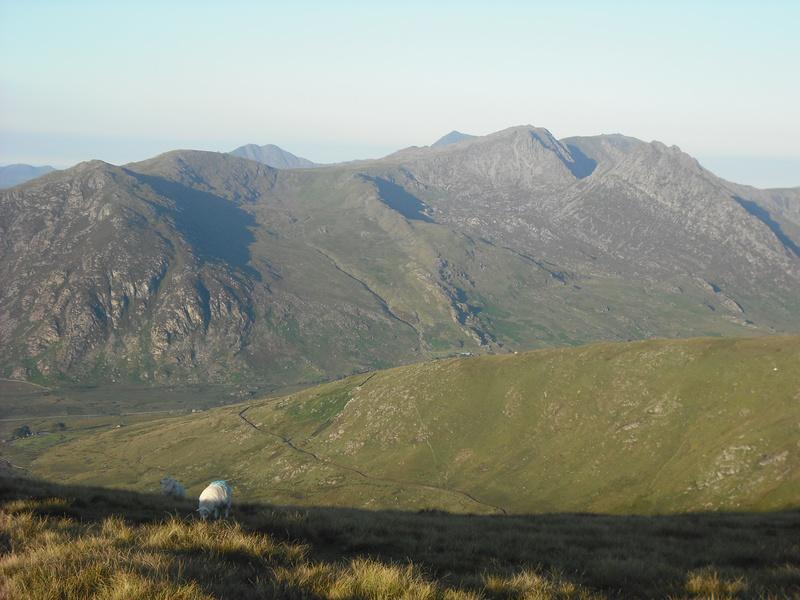 From the summit of Pen Llithrig y Wrach there was an obvious path leading to the NE down the ridge. However, once I had descended a few hundred feet the going became very boggy. I was wearing trail shoes and any idea of keeping my feet dry was abandoned as I splodged though the sphagnum. Further along the ridge the path became more indistinct, but was obviously heading for Moel Eilio. I didn't want to go that far, but hoped to meet the path shown on the map that crossed the ridge from Hafod y rhiw. However, I couldn't find the path, or maybe I just didn't go quite far enough. 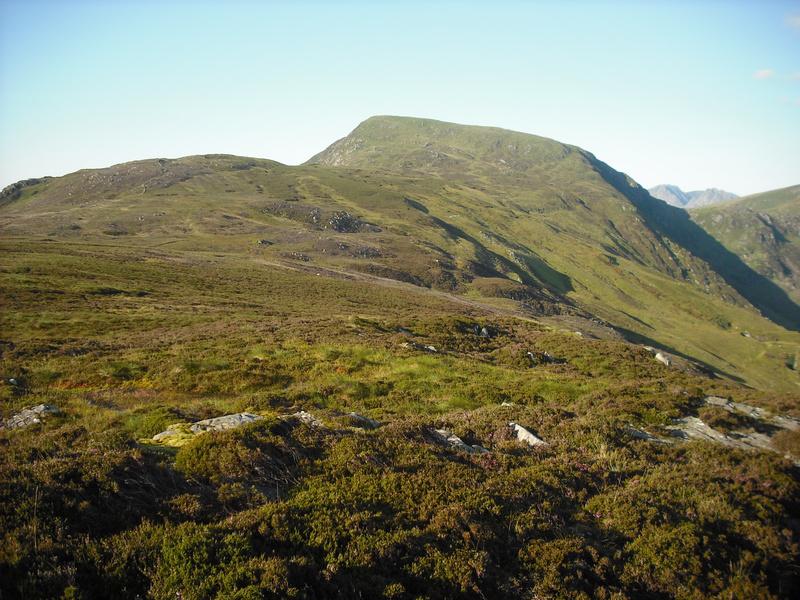 I decided to cut down the side of the ridge above Hafod y rhiw. The going was very difficult, with waist high heather and lots of hidden rocks. At one point my left leg dropped into a hole between two rocks hidden under the heather. Luckily no there was no serious damage. An accident here would have been unfortunate as there is no phone signal and nobody knew where I was. Trying to crawl down would have been almost impossible. After a few hundred feet I came across what at first I thought was a sheep track. However, a bit further on I saw a couple of boot prints and eventually it turned into a path leading to Hafod y rhiw.

I trudged back along the track in the hot sunshine to the car park, where the couple in the red Post Office van kindly made me a cup of tea. Apparently, they used to be keen backpackers, but the woman had a back injury which meant she could no longer carry a load. They spent most of their time touring the country living in the camper van and going for day walks. 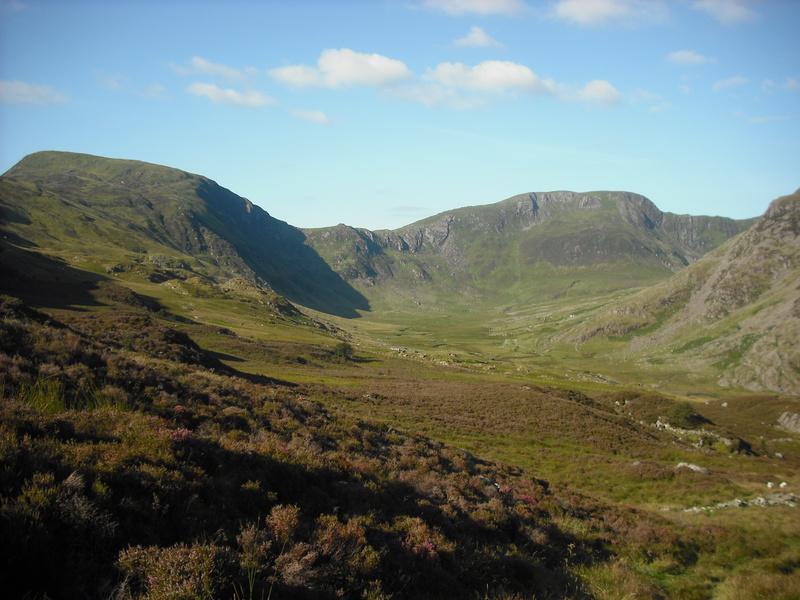 On the way back down the narrow lane to Tal y Bont, I met a tractor coming up to row some hay. Luckily there was just enough space to get past with a bit of toing and froing. I would like to do another trip from Cwm Eigiau. However, the range of possibilities is limited by the small number of ways of accessing the ridge, unlike the Ogwen side where there are countless possible variations.