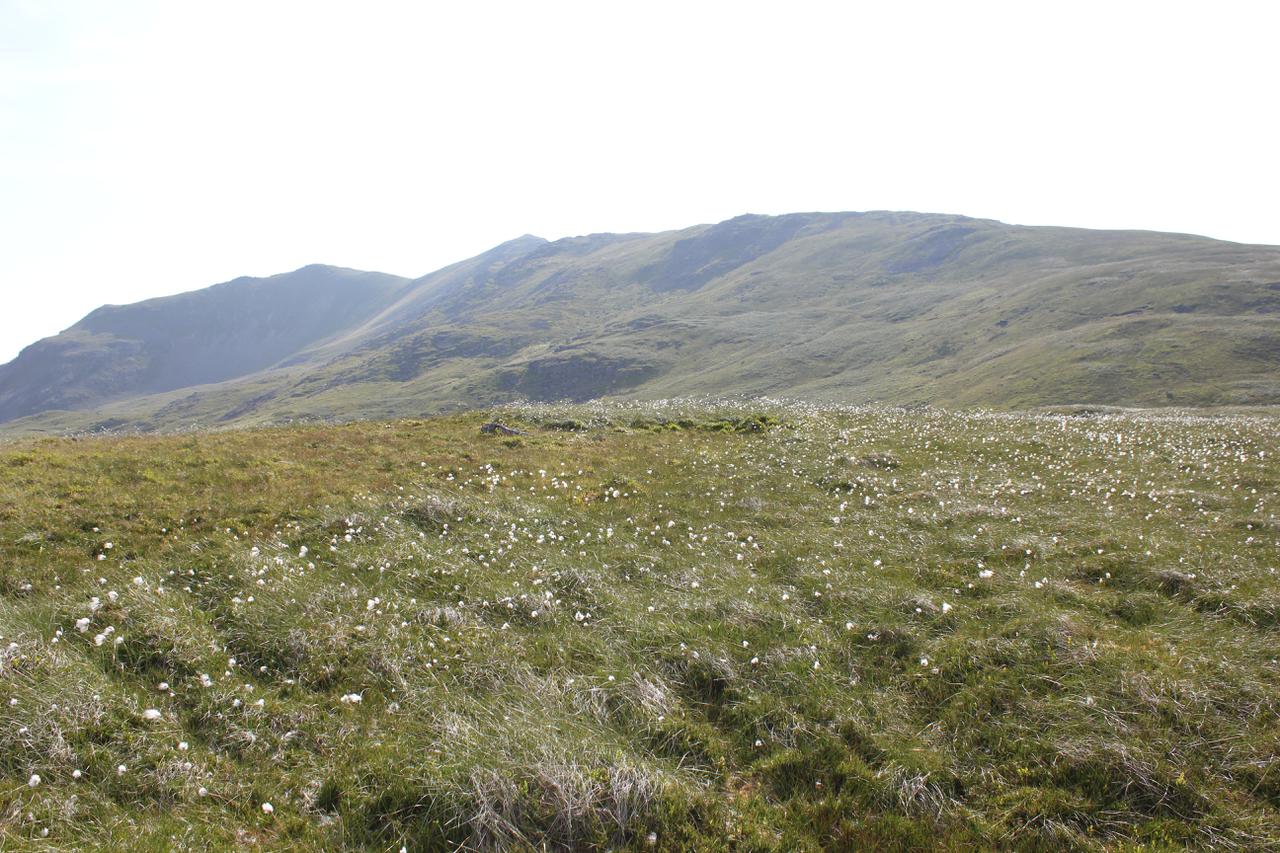 Another short trip, starting late in the day to avoid the heat. I had done the same trip last year and enjoyed it so much, I decided to do it again! The original inspiration for this trip came from v-g excellent site.

Last time I had parked in the small pull in near to the start of the track leading up to Llyn Arenig Fawr. However, this left me with quite a bit of road walking on the second day. So I decided to park in the large area opposite the quarry at 830393, which meant I would get most of the road walking done at the start of the first day.

I left the car around 4:00pm and made my way to the start of the track. It is possible to follow the old railway track alongside the road, but you need to cut back to the road at one point and it seemed simpler to just walk along the road. The temperature was gradually cooling, but it was still very hot at around 25C. As I made my way up the track towards Llyn Arenig Fawr I met a couple of people descending. There was a group with a couple of tents just setting up, below the dam wall. I had a quick look in the bothy, as I had read that it had been vandalized recently. However, it seemed to have been repaired as it looked in good condition.

The cotton grass was out, making the large areas of grass look much more attractive. I also noticed what I know as "Cuckoo spit" - frothy white liquid attached to the blades of grass. 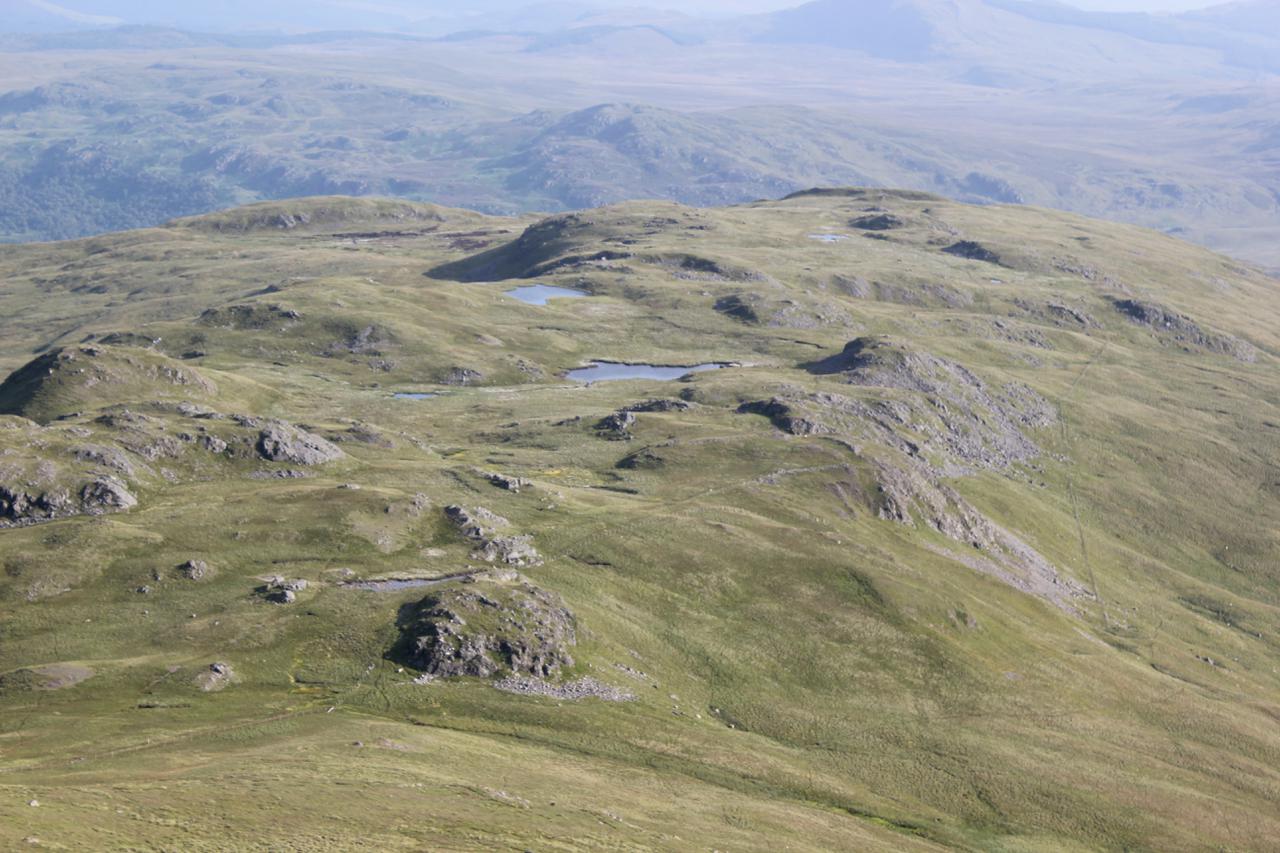 I filled my water bottle from the reservoir and began the plod up the slope leading to Arenig Fawr. Last time I had followed the path that contours all the way along the East face before finally gaining the ridge just below the summit of Arenig Fawr. This time I wanted to gain the ridge earlier by climbing directly up the grass slope on the right. This would give me god views both to the East and West as I climbed towards the summit. On my first attempt I left the path too early and ended up regaining it a bit higher up. However, I could now see the ridge line and on my second attempt got up onto the ridge. The heat had made the distant views hazy, but there was still a fine prospect of almost every peak in Snowdonia. 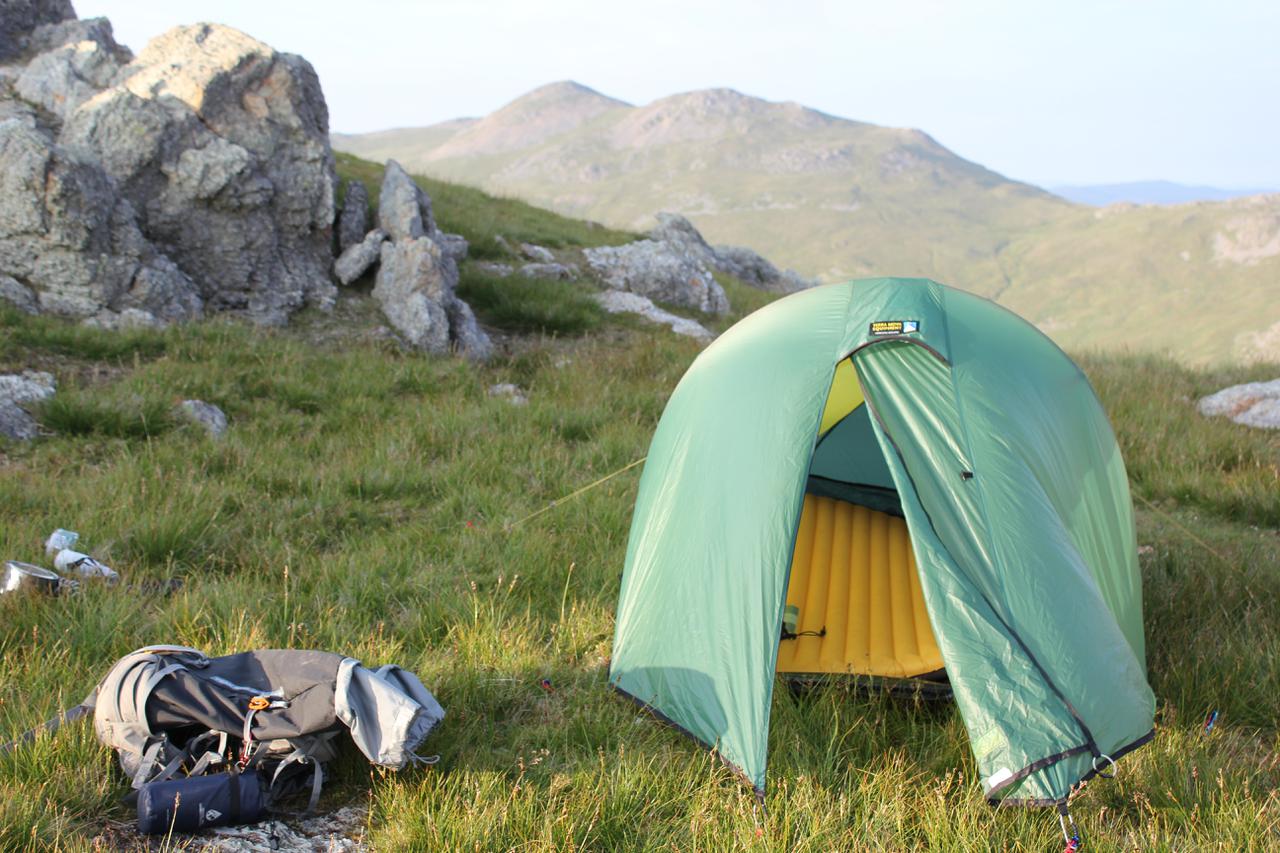 Reaching the summit of Arenig Fawr, I sat down next to the memorial to the crew of the B17 Flying Fortress, which had crashed on the slopes. There were several small wooden crosses and poppies beneath the memorial, presumably placed there on Remembrance Day. I am not really a fan of memorials on mountains, but there are certain historic ones that have been there for many years. It was good that somebody had gone to the trouble of placing the poppies beneath the plaque. I wondered if any of the airmen's families had ever visited this spot. 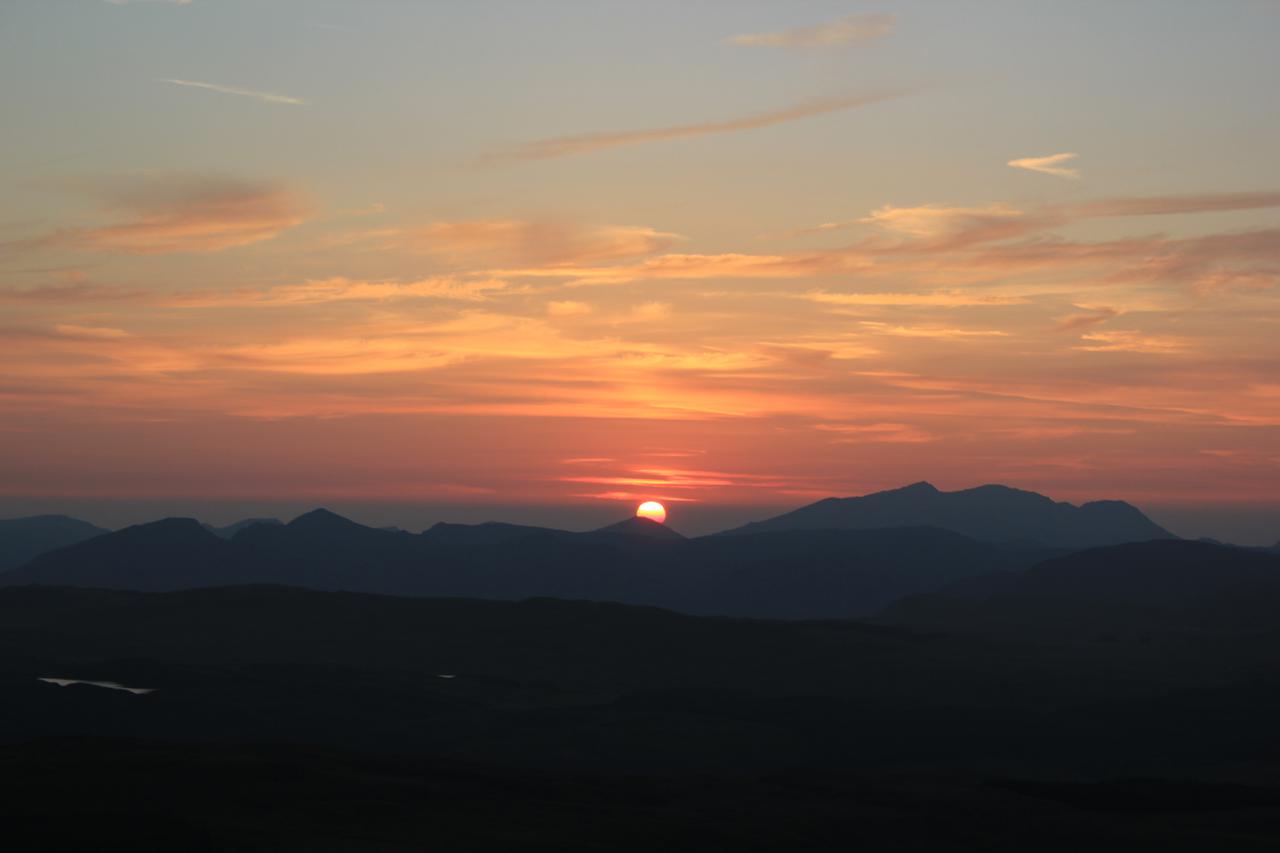 It was now 6:00pm and I wanted to get to Moel Llyfnant before sunset. I set off down the South ridge towards the area of small lakes and grassy knolls. I needed to stock up on water. However, I expected the small stream on the western slope leading down to the col would be dry. I scooped some water out of one of the lakes into a Platypus and it had a distinct green tinge. There were no obvious sources of running water and I knew there were none on Moel Llyfnant. Luckily I had brought my Travel Tap. I don't normally bother purifying water in the UK, as there are usually ample supplies of clean water. However, I had anticipated a problem because of the recent dry weather and so had brought my Travel Tap along with me. I filled up all three one litre Platypus bottles from the lake before walking over to the corner of the fence that marks the start of the descent to the col below Moel Llyfnant.

As I expected all the little streams were dry, as was the normally boggy section at the col. The ascent to Moel Llyfnant is steep and unremitting, but not too far. I sweated my way up the steep grass taking a direct line towards the summit, popping out on the ridge only a few yards away from the cairn.

I camped on a small sheltered area close to the summit. There was just enough of a breeze to keep the insects away. After taking on board lots of fluid and a Hot Cereal Start, I sat by the summit cairn and watched the sun setting over Snowdon.

It was a very warm night and I slept with the doors open. Sometime after it went dark, I emerged from the tent to look at the stars. Even in the middle of the night I was quite comfortable in just shirt sleeves. I woke again shortly after 4:00pm. It was already getting light and climbing out of the tent I could see the sky glowing red behind Arenig Fawr. I got out the camera and took photos as the sun climbed over the shoulder of Arenig Fawr.

Just before the sunrise over Arenig Fawr 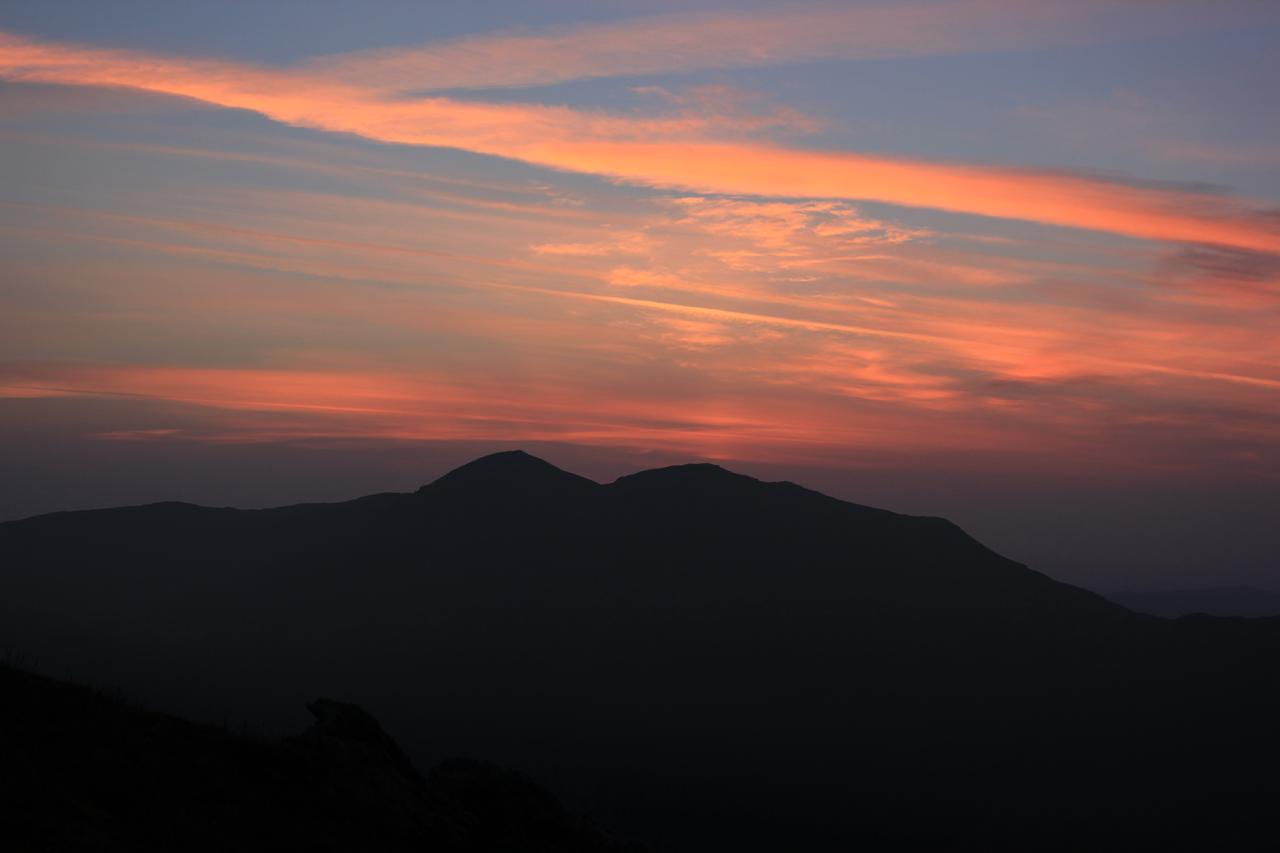 I had packed up by 7:00am and began descending the North Ridge towards the abanodoned cottage of Amnod-bwll. Last time I had retraced my ascent route back to the col and had bushwacked through long tussocky wet bog to the edge of the plantation, which was really unpleasant. The North ridge was much nicer, with short grass and no boggy bits. There are traces of a path, intermingled with lots of misleading sheep tracks. However, if you just head on a bearing towards Amnodd-bwll you will emerge onto a farm track near to the bottom of the hill.

Moel Llyfnant from the forestry track 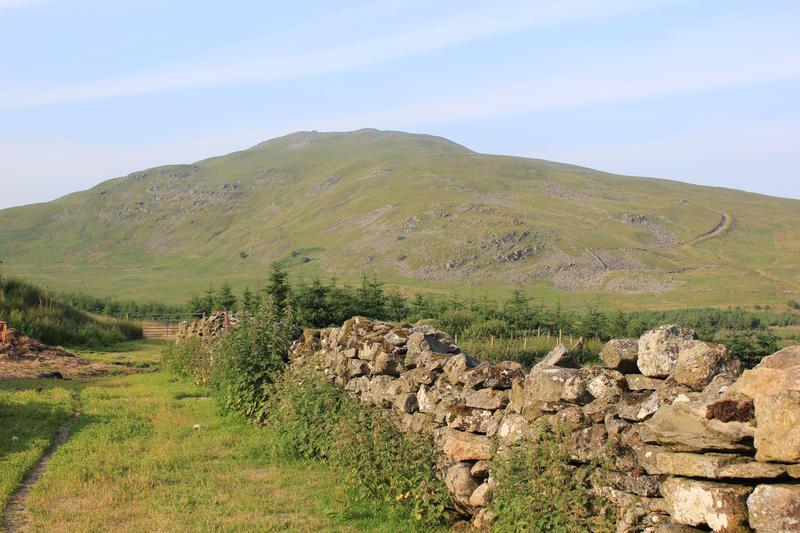 From Amnodd-bwll I followed the forestry road. There comes a point near to the ruined buildings of Amnodd-wen where the track divides. I couldn't remember which branch I should take and set off down the left hand one. After a few hundred yards I could see that this was the wrong way and would bring me out much too far up the road, so I back tracked. The right hand branch of the path soon leads to a very boggy section next to a wall. Whichever way you choose is wet, even in the current drought conditions. After a short distance I reached a style beyond which the splash fest became a farm track. I descended past the farm and onto a recently made track above the railway line. This emerged onto the road only about a kilometre from the car.