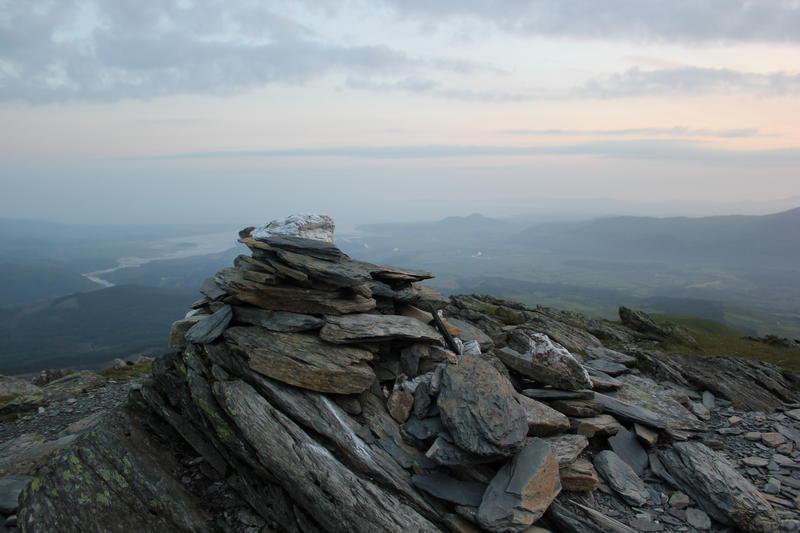 My son was doing his D of E Bronze expedition over the weekend, starting from Llandegla. The weather forecast was for hot and sunny conditions over the next few days. I didn't want to waste the opportunity for an overnight trip, but has to be back home at midday on the Saturday morning. However, we wouldn't be arriving at Llandegla until about 7:00pm, which left very limited time for me to drive into Snowdonia and get up to a summit.

Sunset at this time of year was 9:37pm. The closest mountains, the Arans, only about 30mins drive away. I had completed an Arans circuit a couple of weeks ago and didn't want to go back so soon. Finally, I decided on the Mooelwyns, which were about an hour and fifteen minutes drive from Llandegla. I would be completing about half the walk after sunset, but navigation was simple, just follow the ridge and at this time of year it never goes properly dark. 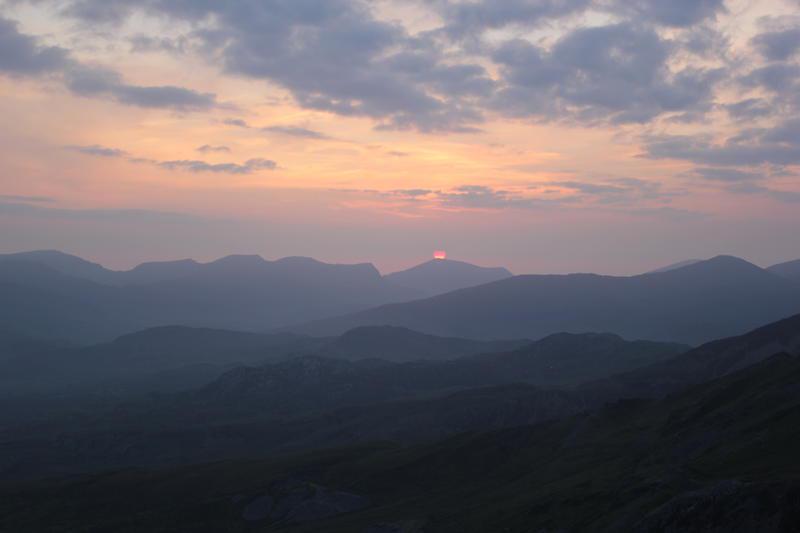 I arrived at the car park in Tanygrisiau shortly before 8:30pm. I had packed my rucksack before leaving home, so all I needed to do was get out of the car and start walking. My plan was to walk up the reservoir road to Llyn Stwlan, climb Moelwyn Bach, descend back to the col and then climb Moelwyn Mawr where I would camp on the summit. I had done this trip in April last year, when I experienced a hail storm on my ascent of Moelwyn Bach and the summit was misted out.

Wandering up the reservoir road munching a cheese and onion sandwich, I met two groups of two people descending. I soon reached the dam wall and crossed the stream below it. I couldn't remember if it was easy to access Llyn Stwlan from this side, so I collected water from the outfall pipe below the dam. Once I had climbed the concrete steps at the far side of the dam, I would see that I could easily have collected my water from the lake, something to remember for next time. 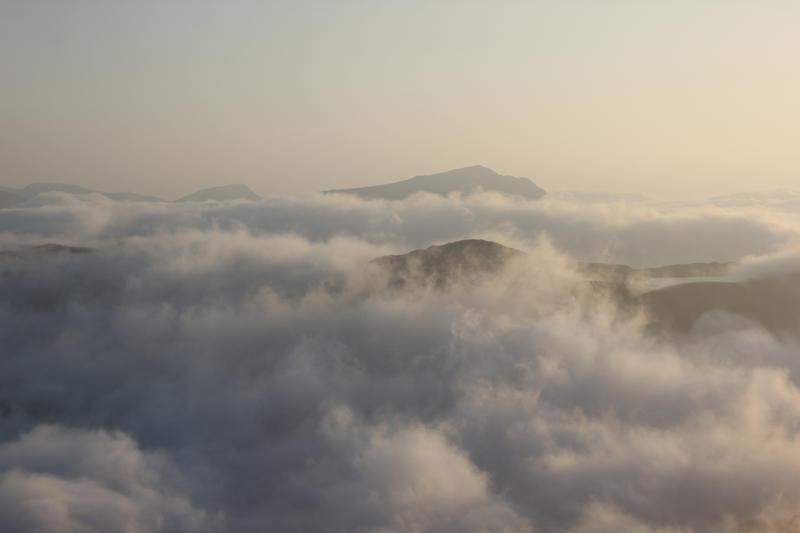 The route from Llyn Stwlan follows a fairly direct line over semi boggy ground to the col between Moelwyn Mawr and Moelwyn Bach. I reached the col at around 9:25pm in time to see the sun setting. I dumped my sack and managed to get to the summit of Moelwyn Bach before the sun disappeared completely. I sat on the summit cairn and watched it disappear over the summit of the Nantlle Ridge and Molewyn Mawr.After taking some photos I retraced my steps to the col. I had left my sack in plain view near to the path. There wasn't anyone else about at this time and I didn't want to lose sight of it in the gathering gloom. 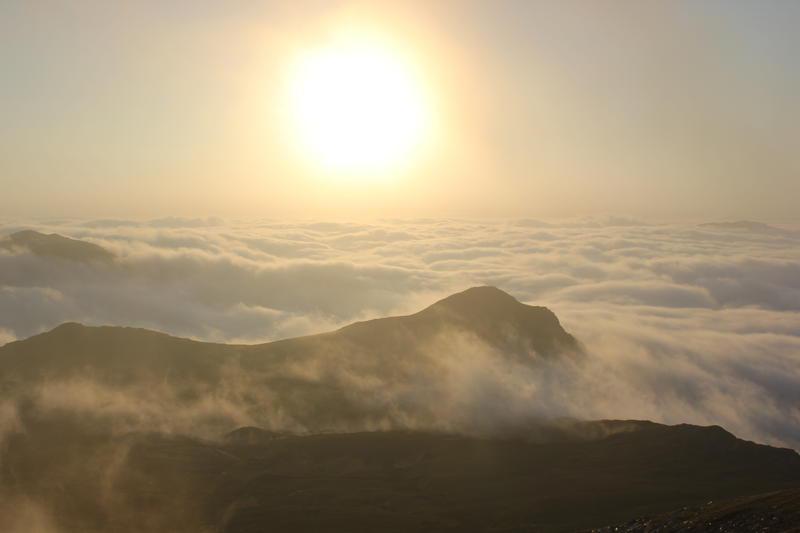 The ascent of Craigysgafn involves a pleasant scramble. Much better than my last visit when this section was more like a winter climb, with the rocks covered in verglas and hail. The ascent to Moelwyn Mawr was much longer than I remembered and it was 11:00pm when I arrived at the summit cairn. Even though the sun had disappeared nearly two hours before, it was still light enough to see without a head torch. 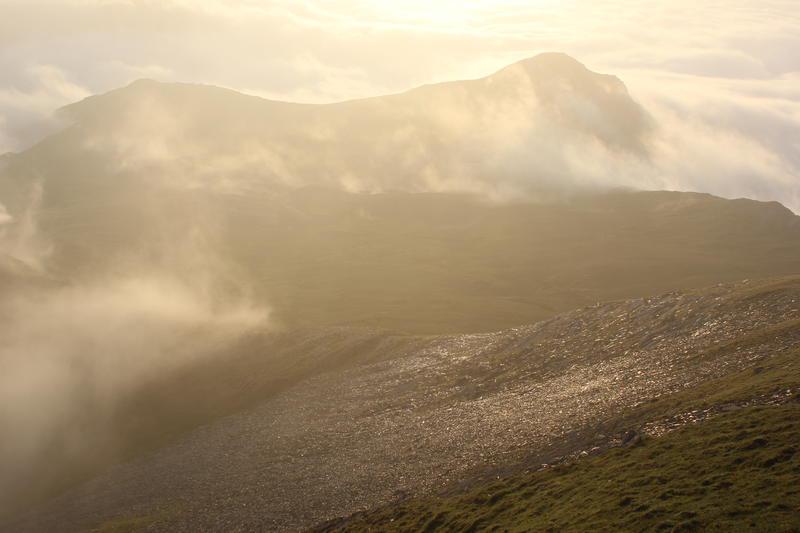 I set up the tent on a patch of grass close to the summit cairn. As I had been climbing towards the summit I had noticed the valleys below me starting to fill with cloud. I made a hot drink and some porridge and it was nearly midnight when I go into my sleeping bag. At around 4:00am an attack of cramp had me hopping about outside the tent. The sun was due to rise shortly after 4:30am, but already there was a red tinge in the Eastern sky. All the surrounding valleys were full of mist, with the odd sliver blowing over the summit. Only the tops of the mountains were visible.

I crawled back into the tent and watched the sun rising through the door. As the sun started to come up, the fragments of mist on the summit dispersed and I was treated to the best inversion I have seen in Wales. I sat outside the tent for a couple of hours watching as the heat of the rising sun made caused the mist in below to swirl and change shape. 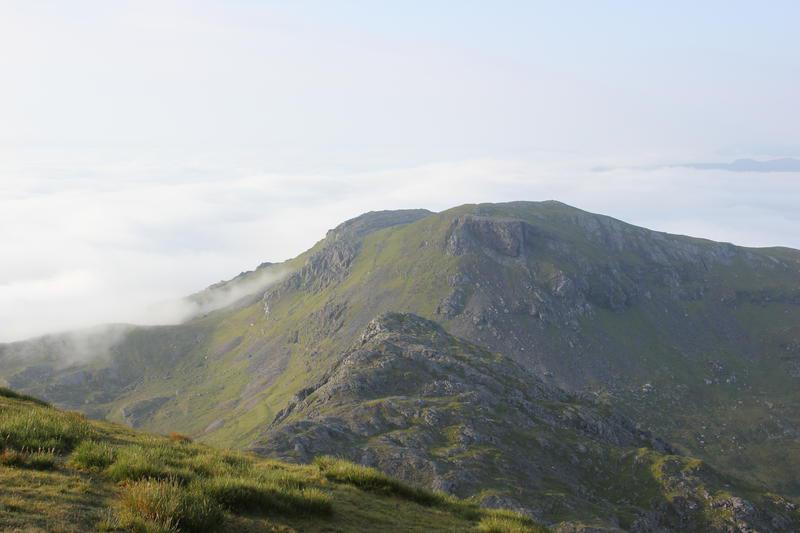 I packed up around 7:00am and began to make my way downwards and over to Moel-yr-hydd. By the time I had reached the summit the heat of the sun had caused the mist to rise although, Moel-yr-hydd was still clear. I descended into the mist towards the old quarry workings. Eventually some old buildings appeared out of the mist and I followed a path. However, this ended on top of a steep slope of slate scree. Not wishing to scramble down, I back-tracked to the buildings and found the track that leads down through the various levels. I soon dropped below the mist and enjoyed a pleasant walk through Cwmorthin back to the road. I drove the short distance to the lakeside cafe for a second breakfast.